The Obama administration had counted on the nation’s insurers to do their share of advertising for the Affordable Care Act, advertising aimed at convincing eligible Americans to enroll in the newly created online insurance marketplaces. By employing that strategy, the government would not only incur fewer advertising costs of its own, but voices other than the administration’s would be drawing attention to the benefits of the health care reform.

However, an analysis of  the five top-spending insurer advertisers during the second half of 2013, conducted by Kantar Media, shows that just one or two companies have “spent any real money on TV ads referencing the existence of the ACA,” even though the law could possibly retool the health insurance industry.

For many insurers, advertising for the Affordable Care Act, known popularly as Obamacare, is unappealing. The idea is that acknowledging a law as divisive as Obamacare could bring the company a firestorm of public outrage. As Kantar Media noted in its analysis, “another election-year flood of political TV ads critical of the law, which already has begun in several Southern states and select congressional districts around the country, may complicate insurers’ marketing efforts.” 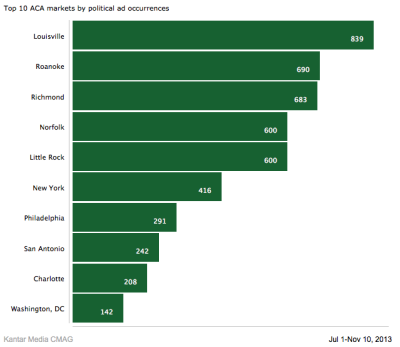 Blue Cross Blue Shield has proven to be the exception, taking the opportunity to capitalize on the millions of potential insurance customers the health care reform law will create.

According to the analysis, Blue Cross Blue Shield has been the biggest spender of Obamacare-related television ads by far. The insurer has introduced dozens of commercials across the country that reference the health care reform “in ways meant to unnerve, irk, amuse or reassure viewers into choosing” a Blue Cross Blue Shield policy, with some ads airing in multiple states and others designed to be state-specific.

One ad from Humana (NYSE:HUM), the fourth-highest advertising spender, does make a vague reference to the Affordable Care Act and the deadline for enrollment, March 31. That ad features a mother asking: “So, if we don’t get our health insurance before the deadline, what happens? Will my son be covered?”

After Blue Cross Blue Shield, the health insurer that has spend the most on television advertisements that reference Obamacare is New York-based Emblem Health. But both Covered California, that state’s health care exchange, and the Department of Health and Human Services have spent more on Affordable Care Act-related TV advertising than Emblem has.

Still, insurers did increase overall advertising on the eve of the rollout of the Affordable Care Act’s online insurance exchanges, although they have scaled back in recent weeks. In the week before the six-month enrollment period began, spending on advertisements that promoted health insurance, including money spent by state-run exchanges, amounted to $2 million, according to Katar Media. Spending rose to $6 million in the first week of enrollment and then peaked at $8 million in late October.

The subsequent decline suggests that insurers may be holding back because the federal website, which links the 36 federally facilitated exchanges, has received increasing attention for the technical problems that have stymied enrollment.