“Our top issue when it comes to the glitches has been the extraordinary number of people coming to check out plans and find out more about Obamacare. The number has obviously exceeded expectations,” White House Press Secretary Jay Carney said at a news briefing early last week, discussing the number of technical problems that plagued the Web portal, Healthcare.gov, during its first days of operation.

Since October 1, individuals attempting to log onto the website, which links customers to the online marketplaces for the 36 states with federally facilitated exchanges, were met with hours of waiting, error messages, and problems calculating subsidies. Carney’s statement suggested the issues were the byproduct of unexpected demand instead of being a fault with the design of the computer system.

“To make further improvements, we are doing several things at once, including adding server capacity and making software changes to make the system more efficient to handle higher volume,” Carney said. According to his explanation, a flaw within the account registration process prevented the website from being able to handle the high traffic volume, and a bottleneck resulted.

The Centers for Medicare and Medicaid Services “has put up a gate at the front end of the system that places visitors into a waiting room and lets them in at a particular pace, so that the surge in volume does not cause the problems that it caused in the past,” Carney added. “Thus far, we’ve reduced waiting room times by a third and are increasingly moving more users through the system, but we’re not satisfied with the performance.”

However, Internet technology experts told Reuters last week that high traffic numbers alone are not the cause of the glitches; they believe flaws in the system’s architecture contributed to the problems.

With the operation of the Affordable Care Act’s cornerstone provision — the individual insurance exchanges — under the microscope of a number of Americans from potential enrollees to policy experts to lawmakers, it is only natural that the Obama administration has chosen to emphasize the high traffic numbers, but independent research has shown that while a significant number of people have checked out Healthcare.gov, the de facto exchange for nearly two-third of states, interest has not translated into policy purchases.

Official numbers for how many insurance plans have been sold on the federal exchanges will not be released until November, but according to the government, Healthcare.gov received 8.6 million unique visitors in the first four days of the six-month enrollment period. Given that official number, the results appear to be an encouraging sign for the administration, as 8.6 million visitors roughly equals one-sixth of all uninsured Americans.

But in an examination of consumer activity on the federal health care exchanges, the nonpartisan research firm Millward Brown Digital, formerly known as Compete, found a much bleaker reality than what official government rhetoric suggests: The massive stream of interest from insurance consumers resulted in only a small trickle of actual enrollments. 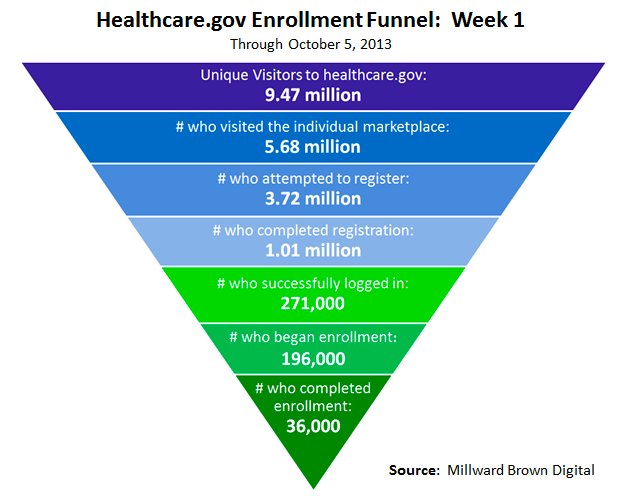 Of the 9.47 million unique visitors that Healthcare.gov received through October 5, only 5.68 million, or approximately 60 percent, navigated to the landing page where, after selecting their state, they were directed to the federal site or redirected to their state-run exchange. At that point, 1.3 million were diverted to one of 16 state-run exchanges, while another 3.7 million attempted to register on Healthcare.gov.

The latter group then ran into problems at this stage; two-thirds of the consumers in that group were stymied at registration, and the site was taken offline during the first weekend.

Despite the problems, some consumers successfully registered and were sent verification emails. But further glitches then created difficulties for consumers seeking to verify their email addresses and log in to their accounts. More than 214,000 people visited the “I’m having trouble logging in to my marketplace account” page, making it one of the most popular pages on the site, according to Millward, and just 27 percent of those who registered were able to successfully log in to their accounts.

The next step was enrollment. Millward found that just 196,000 people began the 30-step enrollment process, but only an even smaller number finished, which is likely a reflection of continued technical problems as well as customers lacking the necessary information and patience to complete all the enrollment steps. In total, only 36,000 people — roughly 1 percent of those who attempted to register for the federal exchange — enrolled.

It is important to remember that the data were accumulated over the course of just five days and that the enrollment period lasts until March 31 of next year. But it is also likely that the exchanges will not see such a large surge of interest ever again, especially because the current political dispute in Washington will likely wind down over the next few months. Millward has calculated that Healthcare.gov was visited by 0.9 percent, or one in 114, of everyone online in the United States on October 1.

And according to Kantar US Insights, the number of visitors to the WEb portal between October 1 and October 13 dropped by 88 percent.

In an email to the Washington Post, Health and Human Services spokeswoman Joanne Peters argued against the idea that traffic dropped as much as the analysis indicated. “HealthCare.gov received 14.6 million unique visits in the first 11 days, showing the intense demand for quality, affordable health insurance,” Peters said to the publication. “While traffic is down somewhat from its peak on day one, it remains high as Americans continue to seek to learn more about their new coverage options. We will be releasing enrollment figures on a monthly basis similar to how we release data for the CHIP and Medicare programs.”

According Aneesh Chopra, who served as the White House’s first chief technology officer during President Obama’s first term, account creation “is always the Holy Grail.” In an interview with the Post, Chopra said that in one week, “a million people began a process that will result in affordable coverage. That means a lot of people are going to ultimately get the product.” Plus, as Millward Vice President Matthew Pace noted, enrollment numbers could change significantly as the website is improved.

Here is a look at how state enrollment progressed: 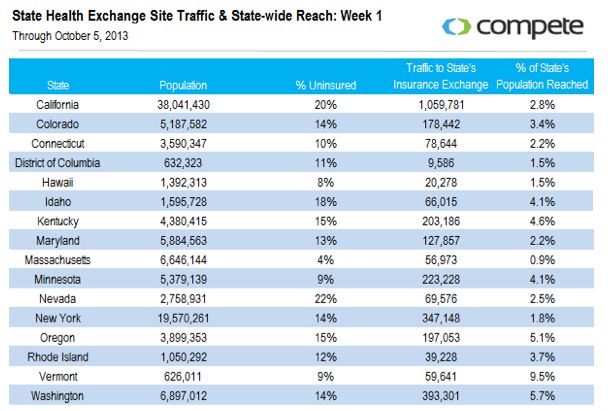 Don’t Miss: Here Are the World’s 10 Most Loved Companies.