This will be a huge week for major U.S markets after a quiet, mixed performance in the week just ended.

The Dow Jones Industrial Average (NYSEARCA:DIA) finished in the green for the week ending July 26, 2013, with a gain of 0.1 percent. The S&P 500 (NYSEARCA:SPY) finished mostly flat for the week, declining 0.03 percent, while the Nasdaq Composite (NYSEARCA:QQQ) added 0.7 percent for the week.  The Russell 2000 (NYSEARCA:IWM) declined 0.2 percent.

Earnings reports were the big news makers, with some significant misses from major bellwether companies as well as fireworks from high-profile names like Facebook (NASDAQ:FB), which exploded 30 percent higher on Thursday and Zynga (NASDAQ:ZNGA), which lost 14 percent on Friday. Other high-profile companies had mixed results as Apple (NASDAQ:AAPL), Ford (NYSE:F), and Boeing (NYSE:BA) beat expectations, while Caterpillar (NYSE:CAT), UPS (NYSE:UPS), and Amazon (NASDAQ:AMZN) missed.

As major indexes like the Dow consolidate just beneath recent highs, momentum slows and we find the major indexes pushing against longer term resistance lines. 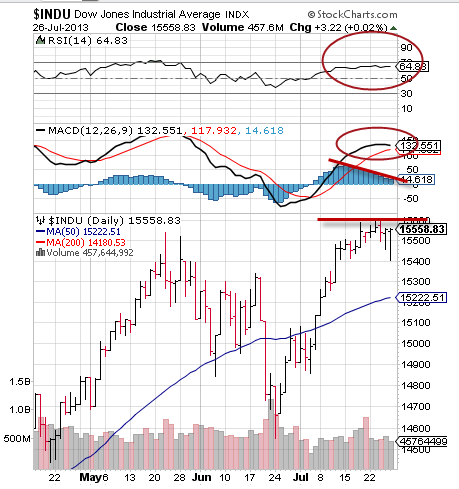 In the chart of the Dow above, technical indicators show that the index is near overbought levels with an RSI reading of 65 while momentum is declining as represented by MACD. Daily MACD is close to generating a “sell” signal and the declining momentum readings are forming a negative divergence with recent price action which has been climbing since early July.

Strong support exists at several levels including the 50 day moving average at 15,222 while overhead resistance remains at the 1700 level near recent all time highs. Overall readings indicate further sideways/consolidation or downwards price movement ahead for the short term. Volatility remains high as the Dow posted a 155 point high to low swing on Friday and managed to recover after being down 150 points at mid-day.

The next week is likely to bring more volatility on market moving news, including the Q2 GDP update, an FOMC meeting, and monthly Non-Farm Payrolls report.

In addition to earnings reports, several important economic reports last week revealed a mixed picture of the ongoing economic recovery. Existing home sales for June missed expectations and declined from May’s reading while new home sales climbed from last month and beat expectations. Markit PMI for July registered at 53.2, in expansion territory and up from June’s 51.9. Employment remained weak as weekly jobless claims climbed to 343,000, higher than expectations and up from last week’s 336,000. Durable goods orders came in at 4.2 for June, beating expectations but down from May’s reading, while July consumer sentiment climbed to 85.1 from last month’s 83.9.

The Richmond Federal Reserve’s manufacturing index fell 18 points in July to -11 from the previous month’s reading of +9. Shipments, new orders and capacity utilization all declined. Richmond Fed President Jeffrey Lacker said that the Fed’s quantitative easing program should be ended as soon as possible and “quickly,” that it hadn’t helped the economy very much as low growth rates continue and that Congress needed to move towards resolving the country’s debt situation.

The upcoming week brings significant developments on the earnings and economic news fronts.

Bottom line: The upcoming week will present market-moving news, with the most closely watched elements being the Federal Reserve’s announcement on Wednesday and the July Non-Farm Payrolls and Unemployment reports on Friday. June ISM and Q2 GDP will also be highly significant. In sum, a pivotal week lies just ahead and more volatility can be expected along with a significant break from the recent consolidation patterns in major U.S. indexes.

Here’s how the main U.S. indexes traded on Monday:

Don’t Miss: What Does the IMF Have to Say About the U.S. Economy?