Super-Selling Cars That Shone in July

As the auto industry steamed through June, more coal was added to the furnace throughout July as the momentum in automotive sales showed little signs of slowing. Across the board, brands and companies are showing impressive figures, made even more so as the succeeding month brings about further gains.

For July, the 10 top selling cars list saw a lot of familiar faces. The Corolla is back at number ten, and there are no newcomers to speak of which have not been on the list previously this year.

Pickup trucks continued to make substantial improvements over 2012 as smaller compact cars had sort of a mixed month.

Even with its 2014 replacement around the corner, the Toyota (NYSE:TM) Corolla bumped off the Ford (NYSE:F) Escape to regain a spot on the top sellers list, with a year-over-year change of just 3.5 percent (compared to what’s next). 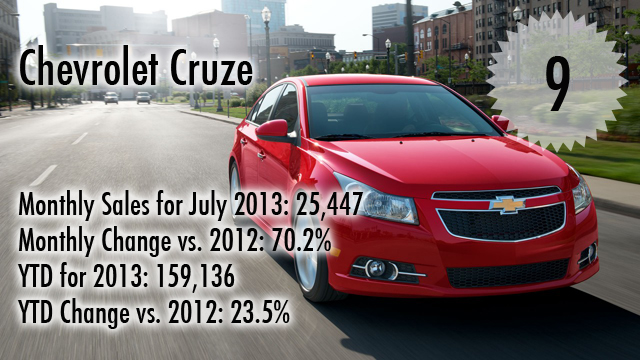 The Chevrolet (NYSE:GM) Cruze maintains its place on the list, with sales gains of 70.2 percent over July of 2012; admittedly, last year’s July wasn’t a hard month to beat. Sales for the Cruze were down 39 percent, though incentives have resurrected the Cruze’s sales since then. 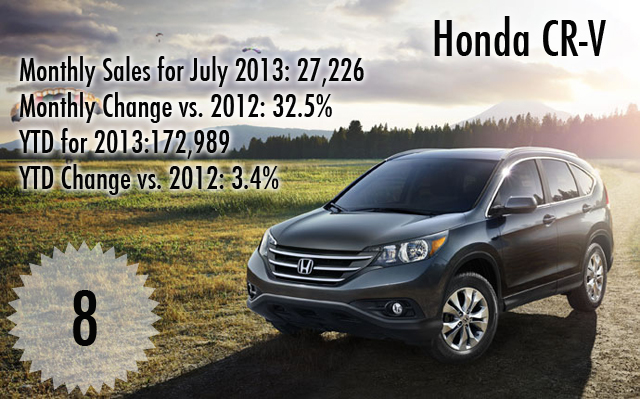 Moving up two slots since 2010, Honda’s (NYSE:HMC) CR-V continues to sell well, as it still ranks ahead of the Corolla, Focus, and other high-volume cars that usually find a place in the top 10. The 27,226 units even outsold its stellar June numbers of 26,572. 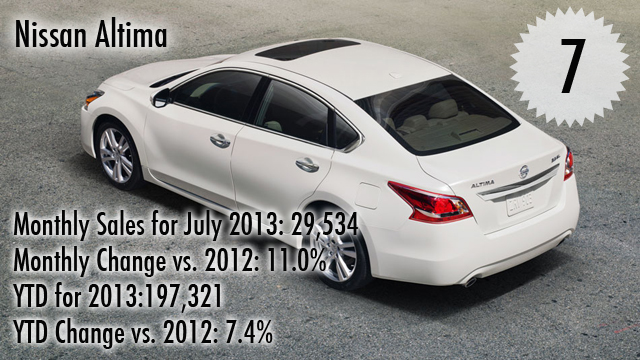 Continuing a fantastic year for Nissan (NSANY.PK), the Altima racks up another strong month of sales with an 11 percent gain over the same month last year.

The Ram pickup moved up one spot to number six over June’s seventh place finish, with an impressive 31.4 percent year-over-year gain from July 2012′s sales, besting the gains it made in June.

The redesigned generation of the Accord continues to hold sway over customers, as the Accord packed on a respectable 10 percent sales gain from last July. What’s more, Honda has yet to release its new hybrid variant, which is rated for 49 miles per gallon combined and sure to generate additional demand. 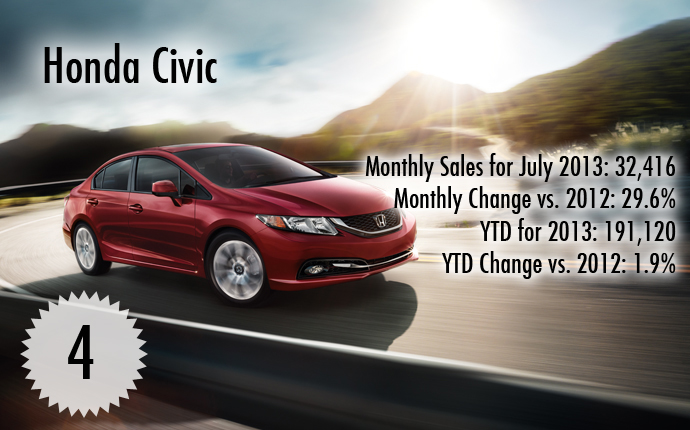 The Accord’s little sibling managed to come out for a fourth-place finish, moving two spaces up from June’s sixth-place slot. More importantly, the year-to-date sales have swung positive to 1.9 percent from June’s -2.4 percent deficit.

Toyota maintained its crown as the leading car for the top ten with sales gains of 16.3 percent — in contrast to June’s 11.7 percent as Toyota’s relentless incentive program continued to drive buyers. Noticeably, Toyota’s year-to-date deficit narrowed from -2.6 percent in June to -0.6 percent in July.

It’s not as much as the Cruze’s sales gains, but the Silverado put on a substantial 45.2 percent sales gain for July and brought the truck’s year-to-date sales from 24.7 percent in June to 27.4 percent in July, conveniently. 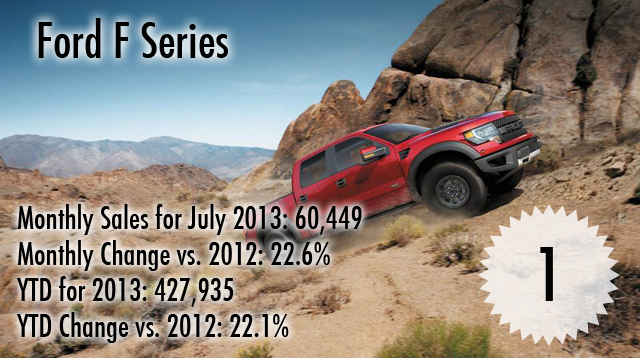 The F-150 Silverado and Camry maintained the status quo throughout July with the Ford keeping the top spot — again. Despite being early, the new trucks from Chevy haven’t appeared to make a significant dent in Ford’s sales. The year-to-date sales rose 0.1 percent, while the monthly change also dipped by a percentage point.