Kaiser’s October 2013 Health Tracking Poll – conducted in the days immediately following the end of the partial government shutdown — found that the public paid much more attention to the brinksmanship politics that led to a partial shutdown of the United States government than to the technical problems that plagued the launch of the online federal health insurance marketplaces, the cornerstone provision of the Affordable Care Act.

A strange twist of fate left placed the beginning of enrollment for the Affordable Care Act and the first day of the new fiscal year on the same day: October 1. That coincidence gave Republicans an opportunity, or what they thought was an opportunity, to defund the health care reform law. The refusal of both parties to agree on a continuing resolution to fund the federal government in the new fiscal year — with the funding of Obamacare as the main hitch in negotiations — left the U.S. without a continuing resolution and significant parts of the government were shut down on October 1, putting the United States in jeopardy of defaulting on its federal debt for the first time in history.

The fiscal standoff in Washington is over. The United States will not default on its public debt and the federal government will have the funds to continuing operating thanks to a piece of legislation passed in mid-October. Of course, the bill is more like a temporary bandage than actually solution, and the postponement of the unresolved budget dispute is giving congressional lawmakers the time to turn the debate to what actually precipitated the political crisis — the Affordable Care Act. 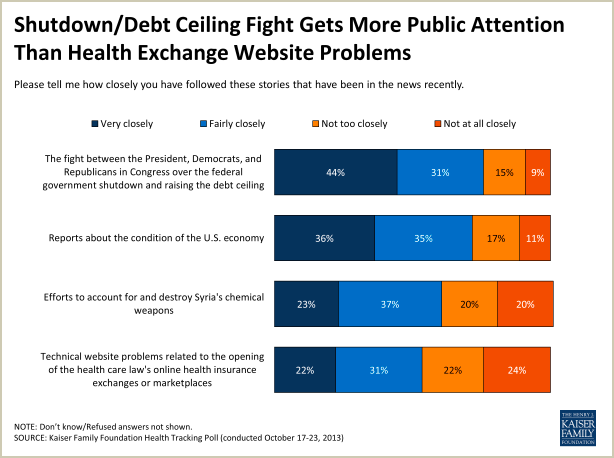 It is important to remember that opinion has shift slightly from when Kaiser’s survey was conducted. Now, with the congressional hearings, the flaws of the rollout of the online marketplaces are on full display — and the recent drops in the president’s approval rating are not only linked to the allegations of spying by the National Security Agency and the political stalemate in Washington, but to the ongoing problems with the Affordable Care Act as well.

This week, a poll conducted by NBC and the Wall Street Journal showed Obama’s approval rating dropped 5 percentage points to 42 percent. By comparison, the number of Americans who disapprove of his job performance — 51 percent — is at a high reached only once before.

At the time of the survey, 44 percent of respondents said they followed the fight over the federal government shutdown and raising the debt ceiling “very closely,” while half that many, 22 percent, said they paid close attention to news about the website problems with the insurance exchanges. 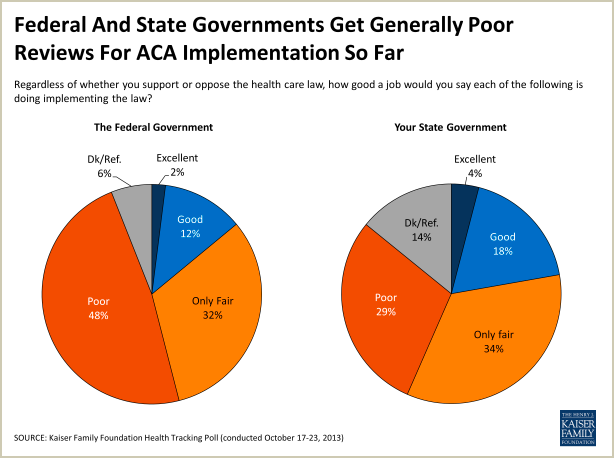 But the fact that so few people reported following the problems plaguing the rollout of the individual insurance exchanges did not stop many respondents from saying the federal government did a poor job implementing the health care reform law. The first 31 days of the six-month open enrollment period for the individual markets were plagued by software errors that caused hours-long wait times, prevented potential customers from creating accounts and completing the 30-step enrollment process, sent insurers the wrong information, and made it difficult for customers to get an accurate cost estimate.

Exchange glitches have been a particular rallying point for those that oppose the Affordable Care Act, spawning a series of congressional hearings and putting the success of President Barack Obama’s signature first-term legislative achievement on tenuous ground. “High capacity on the website, direct enrollment not working,” was a primary reason only “approximately 100″ enrollments had taken place as of mid-way through October 2, according to notes from twice-a-day “war room” meetings convened at the Centers for Medicare and Medicaid Services after the federal website’s October 1 launch.

By comparison, the fourteen states that chose to build and run their own exchanges have suffered far fewer glitches for the most part. That reality is reflected in the Kaiser survey’s numbers as just 29 percent of respondents said states had done a poor job with implementation compared to the 48 percent that said the federal government had poorly implemented the federally-facilitated exchanges. Unsurprisingly, opinion of the Affordable Care Act is still divided strongly along partisan lines. But still, even among Democrats, a majority of respondents felt the federal government has done “only fair” or “poor” at implementation. 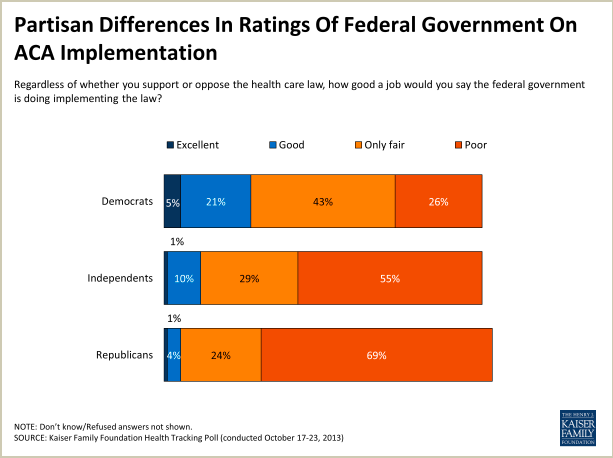 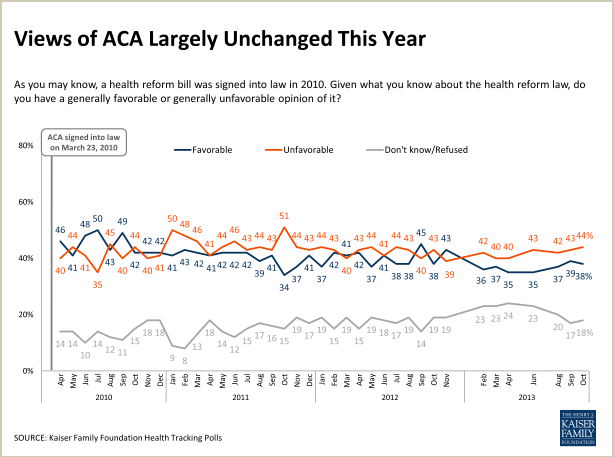 Nevertheless, even with views on implementation largely negative, public opinion remains largely unchanged from earlier surveys conducted this year, with 44 percent expressing an unfavorable view of the health care reform, 38 percent a favorable view, and 18 percent saying they do not know enough to say. Here too, partisanship is evident. Seven in ten Democrats said they viewed the law favorably, while eight in ten Republicans said they viewed it unfavorably. 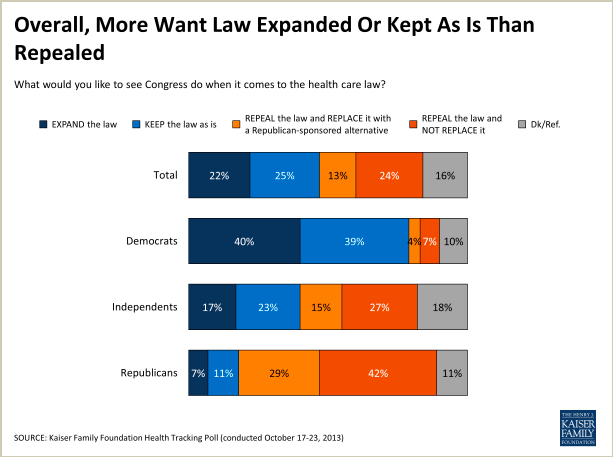 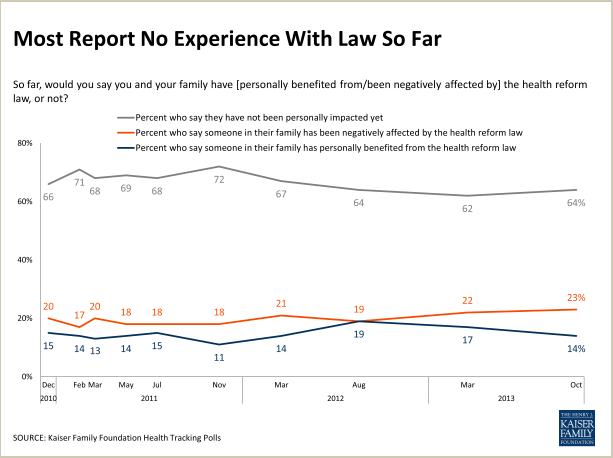 Opinions regarding the Affordable Care Act abound, but by the middle of October, few of the survey’s respondents said the had been personally impacted by the law. Of those that had felt an impact, a greater number said the experience had been negative, 23 percent, than those that said they had a positive experience, 14 percent. According to the survey, the most commonly reported positive effects were expanded access to insurance, extension of dependent coverage, and lower health care costs, while the most commonly reported negative effect was increased costs, followed by impacts on employment or business and changes to insurance benefits.

The low number of positive experiences speaks to the fact that the government memorandums show few people had enrolled for coverage via the exchanges at the beginning of the month. But the fact that few respondents overall reported any impacts from the health care reform law suggests that it has not been as a dramatic disruption to the American health care system as expected. Of course, hardly a month of the sixth-month enrollment period has elapsed, and since the survey was conducted, more around 2 million Americans have been informed that their private market insurance policies will be terminated at the end of this year.

There is also the fact that a large share of respondents – 44 percent — said they do n0t have enough information to understand the law’s impact.