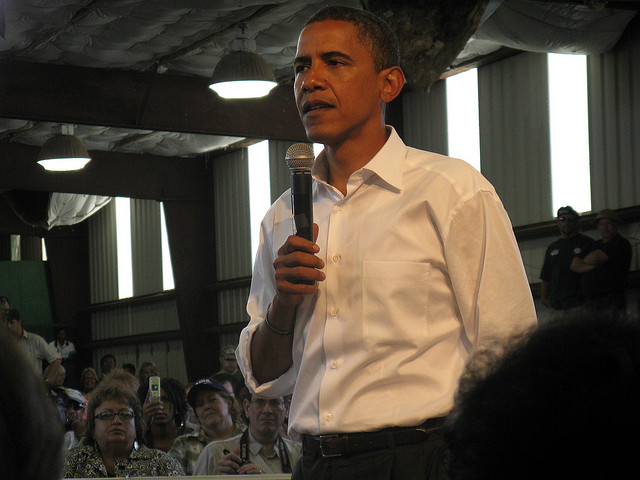 For four years, the Affordable Care Act — its passage and its implementation — have been a huge point of contention between Democrats and Republicans.

The extent to which the health care reform law has polarized politics was evident during the standoff between lawmakers over the funding of the federal government. The beginning of enrollment for the Affordable Care Act and the first day of the new fiscal year fell on the same day: October 1. That coincidence gave Republicans an opportunity.

On the last Friday in September, Republicans in the House of Representatives pushed through a stopgap bill by a strict party-line vote that would fund the federal government for the upcoming fiscal year only if discretionary spending for the Affordable Care Act was eliminated. Both President Barack Obama and Democrats in the Senate, where the party has a majority, prevented that legislation from progressing any further than the House, which put the government on course to shut down.

Political polarization has colored how successful the public perceives the Affordable Care Act to be and how detrimental the technical glitches plaguing the federal online insurance marketplaces will be. While the critiques of the Affordable Care Act as a whole — and particularly the federal website that is meant to expand coverage to many of America’s 48 million uninsured — were largely lost in the noise created by the partial government shutdown, those misgivings came roaring back once Congress passed legislation extending current funding levels and raising the debt ceiling.

As time has passed, the media coverage surrounding Obamacare’s implementation has become increasingly critical, particularly regarding the website’s problems. Since October 1, individuals attempting to log on to the website, which links customers to the online marketplaces for the 36 states with federally facilitated exchanges, have been met with hours of waiting, error messages, and problems calculating subsidies.

When asked to recall “what you have seen, read or heard about” the rollout of the Affordable Care Act, a survey conducted by George Washington University showed that a slight majority of respondents — 42 percent — said the coverage had made them less likely to be favorable toward the health care reform. For reference, 53 percent of respondents said they opposed the reform law, 43 percent said they favored it, and 4 percent were unsure.

A particular point of contention in the fight between Republicans and Democrats for positive public opinion are the problems plaguing the implementation of the key provision of the Affordable Care Act: the online insurance exchanges.

The administration’s fear that the technical problems that have kept enrollment numbers low and perhaps even created a crisis of confidence among potential enrollees has begun to show, according to a report by the Washington Post. The story relied heavily on anonymous sources within the Obama administration that showed a clear effort to deflect responsibility for the problems.

For example, onetime economic aides of President Barack Obama — Larry Summers and Peter Orszag — were concerned about implementation from the beginning. They believed that an outside expert, one with experience in business, insurance, and technology was needed, but as the Post reported, the president decided to entrust Nancy-Ann DeParle, his chief health care policy adviser, with building the exchange system.

But as the Post report went on to explain, she was not to blame for the problems. One source told the publication that DeParle, who no longer oversees the program, could not get Health and Human Services Secretary Kathleen Sebelius and Treasury Secretary Timothy Geithner to focus on the reform. And that was just the beginning of the blame game. Other anonymous sources defended the Centers for Medicare and Medicaid Services, saying that it was in fact federal contractors who were at fault.

The other side of that argument is that just because the website has not functioned smoothly does not mean that the entire reform is flawed. The president and his aides have made a point of asserting that the Affordable Care Act, which was passed more than three years ago, has already changed the American health care system for the best.

“The insurance market now has the strongest consumer protections that this country has ever known,” Obama said of the reforms in a Monday speech. “No more discriminating against kids with pre-existing conditions. No more dropping your policy when you get sick. No more lifetime limits on the care that you can receive. All of that and more is part of a new Patient’s Bill of Rights that’s smack-dab in the middle of the Affordable Care Act, and it’s helping people right now.”

But for many other lawmakers, the website ” is just the tip of the iceberg,” as Republican Sen. John Barrasso of Wyoming said on the Senate floor on Monday. “There is the sticker shock for increased costs. There’s increased out-of-pocket cost in terms of deductibles and co-pays, and many Americans are not going to be able to keep their doctor, even if they’d like to keep their doctor.”