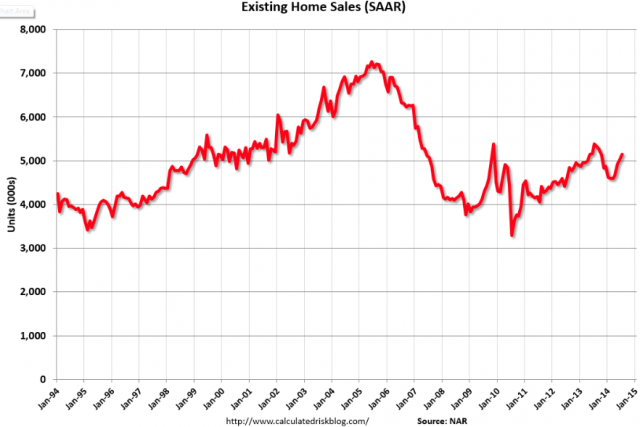 The real estate market continues to show signs of improvement from the housing bubble collapse. Despite a slow start to the year, existing-home sales have now climbed higher for four consecutive months. In fact, sales last month beat expectations and reached their fastest pace of the year.

Sales easily beat expectations. On average, economists expected sales to decline toward a pace of 5 million units in July. Earlier this year, sales missed estimates for seven consecutive months. Although sales were impressive last month, they remain 4.3 percent below the 5.38 million unit level a year earlier. This is the ninth consecutive month that sales were below year-ago levels.

Momentum is slowly building behind improving inventory levels. “The number of houses for sale is higher than a year ago and tamer price increases are giving prospective buyers less hesitation about entering the market,” explained Lawrence Yun, NAR’s chief economist. “More people are buying homes compared to earlier in the year and this trend should continue with interest rates remaining low and apartment rents on the rise.”

However, first-time buyers accounted for only 29 percent of purchases last month, up from 28 percent in June and the second consecutive monthly gain, but a normal reading would be closer to 40 percent. The median existing-home price for all housing types in July increased 4.9 percent year over year to $222,900. Home prices have posted 29 consecutive months of year-over-year gains and will likely remain a challenge for first-time buyers.

Yun warns that affordability issues to magnify in the coming years. “Although interest rates have fallen in recent months, median family incomes are still lagging behind price gains, and mortgage rates will inevitably rise with the upcoming changes in monetary policy,” he said. On the positive, all-cash sales declined to 29 percent in July from 32 percent in June, and distressed home sales accounted for just 9 percent of sales last month, down from 15 percent a year ago and the first single-digit reading since October 2008.