Syria’s Other Trouble: Value of Its Pound at All-Time Low

As I have documented previously, the economic devastation and international sanctions that have accompanied Syria’s civil war have wreaked havoc on the country’s currency, the Syrian pound. In a desperate, wrong-headed attempt to save its troubled currency, the Assad regime has imposed harsh penalties for currency trading on the black-market. This strategy proved wildly unsuccessful when it was utilized by the Iran in October of 2012.

Indeed, as was the case in Iran, attempts to suppress currency exchange have sparked a panic — a run on the Syrian pound. As of 10 July 2013, the value of the Syrian pound on the black market has hit an all time low, with the current black-market exchange rate now sitting at 295.00 SYP/USD.

As the accompanying chart shows, this has sent the implied monthly inflation rate in Syria skyrocketing. 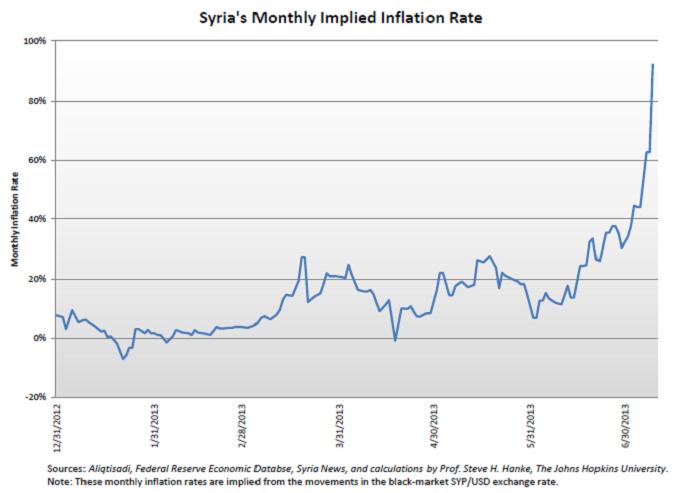 I have established a page to track current black-market exchange-rate and implied inflation data for the Syrian pound, as well as for troubled currencies in Iran, Argentina, North Korea, and Venezuela. For more, see: The Troubled Currencies Project.

Don’t Miss: What Do Americans Think About the Housing Recovery?