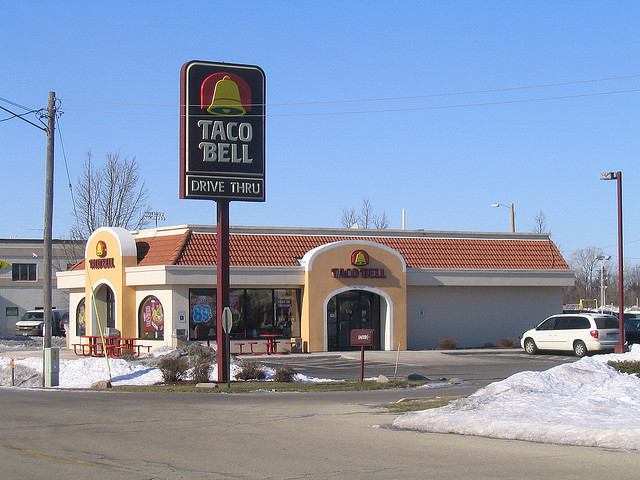 Taco Bell (NYSE:YUM) already rolled out its new breakfast menu back on March 27, but it’s not done yet. Not, not even close. The fast-food chain unveiled its newest television ad this week that follows up on its breakfast-at-Taco-Bell push, and once again, it enlists McDonald’s (NYSE:MCD) as its main target. The ad went live on YouTube at the beginning of the week and had already nabbed nearly 48,000 views as of mid-day Tuesday. In its new commercial, Taco Bell challenges consumers to “get with the times” and eat at Taco Bell for breakfast rather than McDonald’s; “Move on from your old McDonald’s breakfast with Taco Bell’s exciting new breakfast menu.”

March 27 marked Taco Bell’s first dive into the fast-food breakfast pool, but Chris Brandt, Taco Bell’s chief marketing officer, explained to Nation’s Restaurant News this week that, “We’re just getting starting with breakfast,” adding that the chain wants to “boldly disrupt” the category. It was somewhat unexpected when Taco Bell announced earlier in the winter that it wanted to start feeding customers in the morning, considering its most popular items are Locos Tacos and beef burritos. However, thus far, the breakfast rollout has gone over significantly well, and many fast-food lovers are giving the chain’s Waffle Taco or Cinnabon Delights a chance.

In addition, what’s even more surprising is that coffee is now one of Taco Bell’s new bestsellers. Having never sold the hot caffeine before, analysts weren’t sure if customers would trust Taco Bell with their morning brew, but Brandt maintained Monday via Nation’s Restaurant News that “coffee has been really embraced” by customers, and it is now served either hot or iced at $1.49.

Perhaps one of the keys to Taco Bell’s recent success with its breakfast menu has been its close attention to social media and effective marketing. Before the commercial just launched this week, Taco Bell rolled out another comical spot featuring real-life Ronald McDonalds who they showed sharing a preference for Taco Bell’s breakfast menu over McDonald’s. Of course, McDonald’s responded, posting a status on Facebook of the company mascot petting Taco Bell’s old baby chihuahua, with the caption “Imitation is the sincerest form of flattery.”

However, it’s still safe to say that Taco Bell is crowding McDonald’s space, and consumers on all social media channels have taken note. Brand told Nation’s Restaurant News Monday that, “We’ve got more than a billion earned impressions on social. We’ve gotten more than five and a half billion earned media impressions. Just the spots on YouTube that we’ve put out there, we’ve gotten 3 million views of that.”

Thus, although consumers now certainly need to order from Taco Bell’s new breakfast menu, rather than just watch a commercial or tweet about it, it’s clear that the chain is off to a good start with its new menu offerings, and it might be on its way to paving the way for future success. As of now, most of Taco Bell’s marketing efforts focus on its Waffle Taco, Cinnabon Delights, and coffee, but in the future, Brandt maintained that the chain is planning on launching yogurt partfaits, more coffee beverages, and oatmeal.