You’ve heard of roughing it and glamping, but there’s another level to which you can aspire. If you’re keen on camping — and driving — why not consider a mansion on wheels? These luxury RVs will take you anywhere in style — and afford you the comforts of your own home, or even better.

Check out these $1million — and up — luxury RVs that will take the sting out of camping once and for all. You can even get a peek at the 1,200-square-foot RV a famous actor likes to travel in (page 8). Life on the road doesn’t have to be tough. 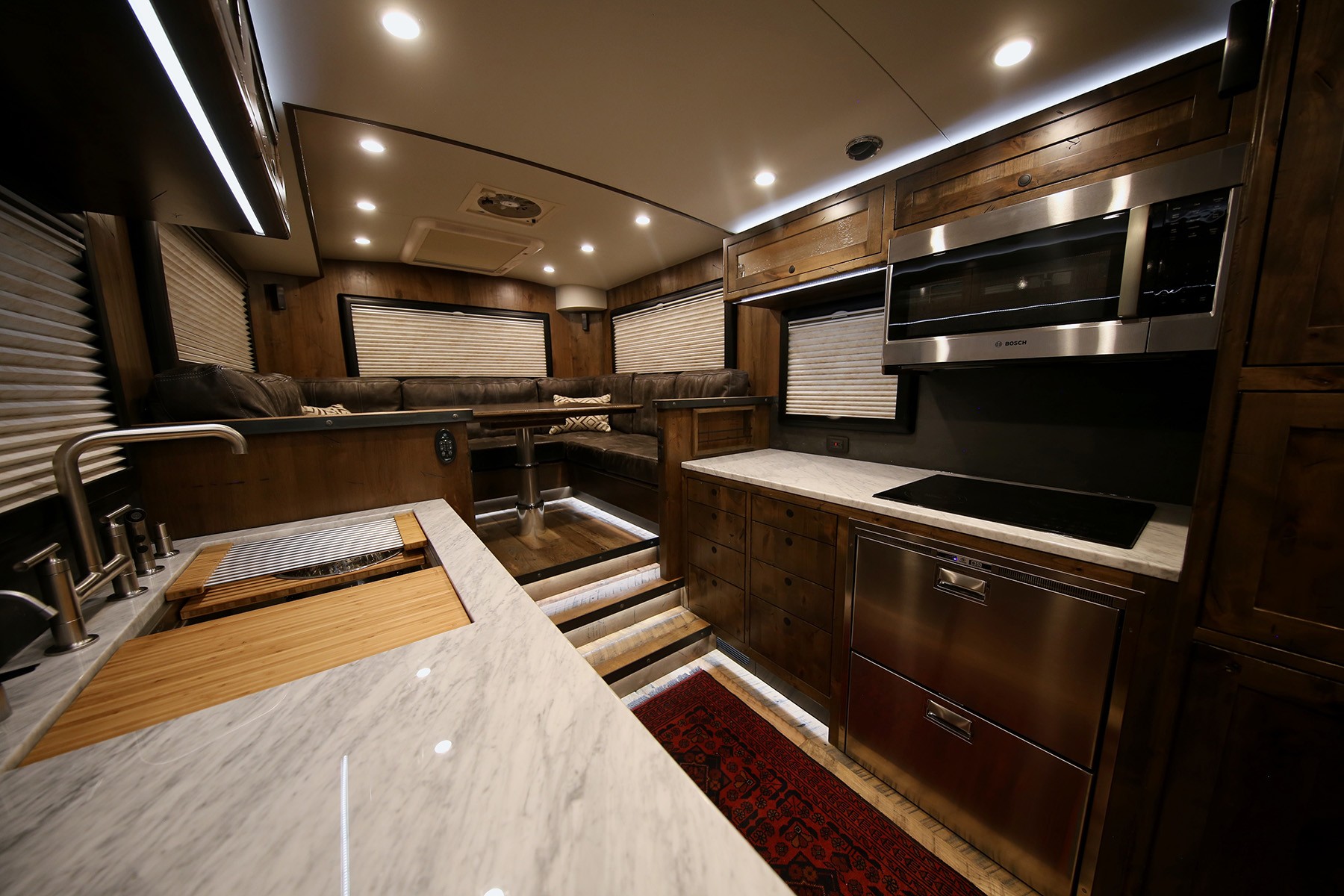 Those marble counters are incredible. | EarthRoamer

According to Camping World, RV builder EarthRoamer unveiled its biggest model ever in 2017, the XV-HD. It’s 35 feet long and sits on a Ford F-750 medium-duty chassis that’s been converted to four-wheel-drive, features 45-inch tires and has one heck of a luxurious camper on top.

With room for six, a bathroom with a shower, a kitchen, and a real washer and dryer, you could absolutely live in this thing. But you’ll want to tour the U.S. with its gas-saving, 6.7-liter diesel engine and 155-gallon fuel tank. Other features include a a 2,100 watt solar panel array on the roof and 20,000 watt-hour battery pack, plus a 250-gallon fresh water supply. Priced at $1.5 million, the company won’t build one for you unless you first put $375,000 down on it.

Next: Just the base model is $1 million. 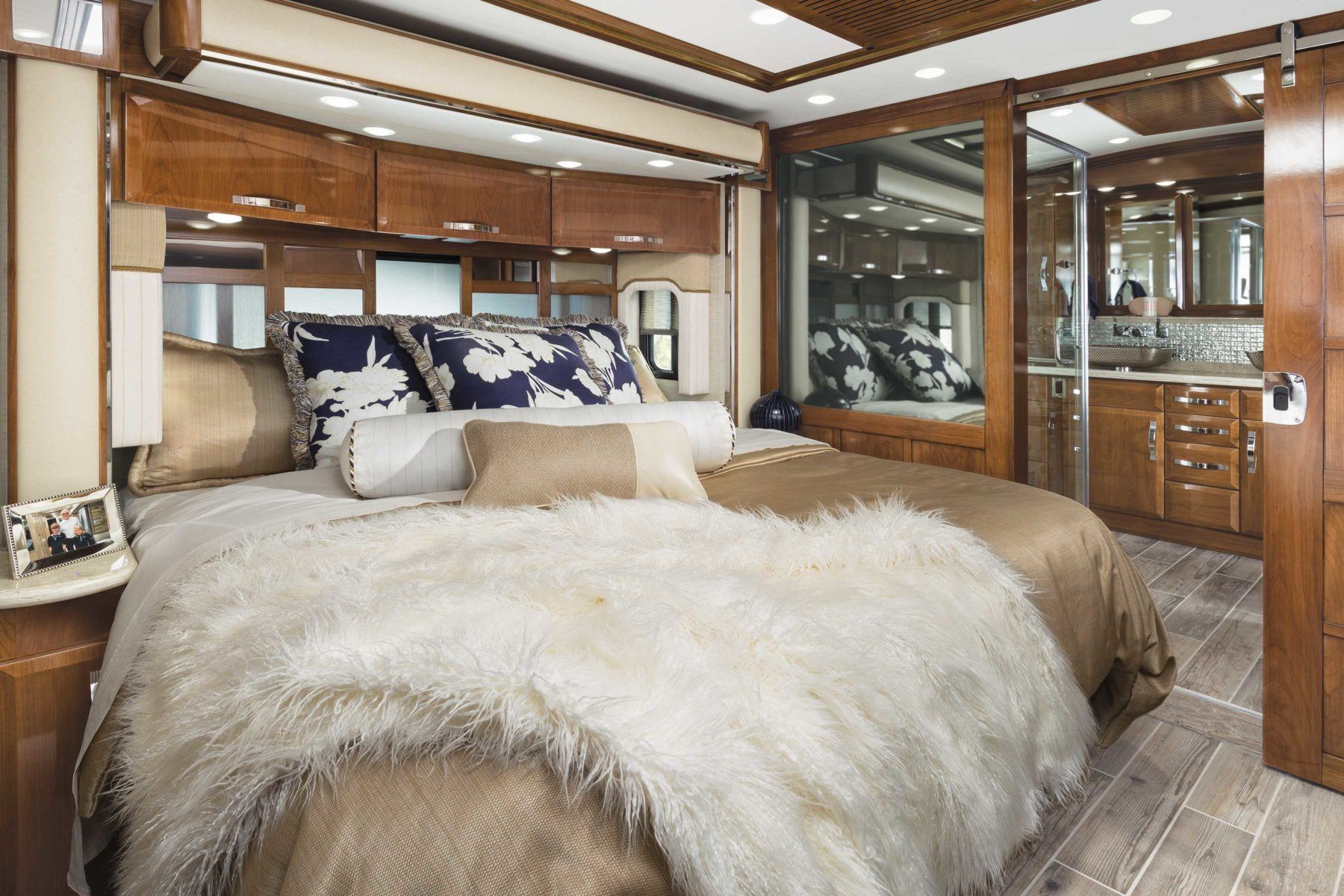 It costs $1 million just for the base model. | Newmar Corp.

The driver’s seat has a tablet nearby so the driver can control everything inside the RV. Safety in a rig this large is important feature, and the Newmar King comes with a lane-departure warning system and adaptive cruise with collision mitigation technology. 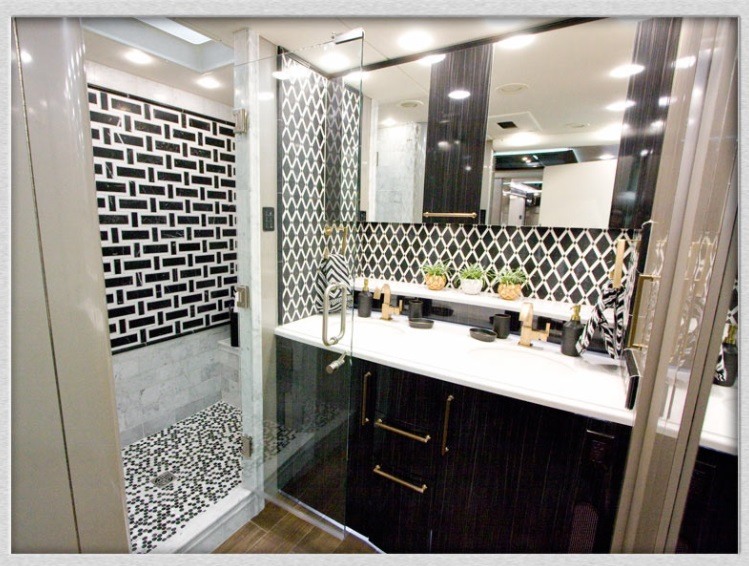 You don’t see bathrooms this nice and most hotels. | Foretravel

You can fully customize this RV, according to Camping World. The 42-foot coach is built for and extremely smooth ride on the road. The company used aircraft technology to evenly distribute road vibration over the entire chassis, which of course, cuts down on a lot of noise. Luxury features abound, too: there are four air-conditioning units on the RV’s roof and a long list of options you can choose to tailor your ride to exactly your preferences.

Next: An RV with a view. 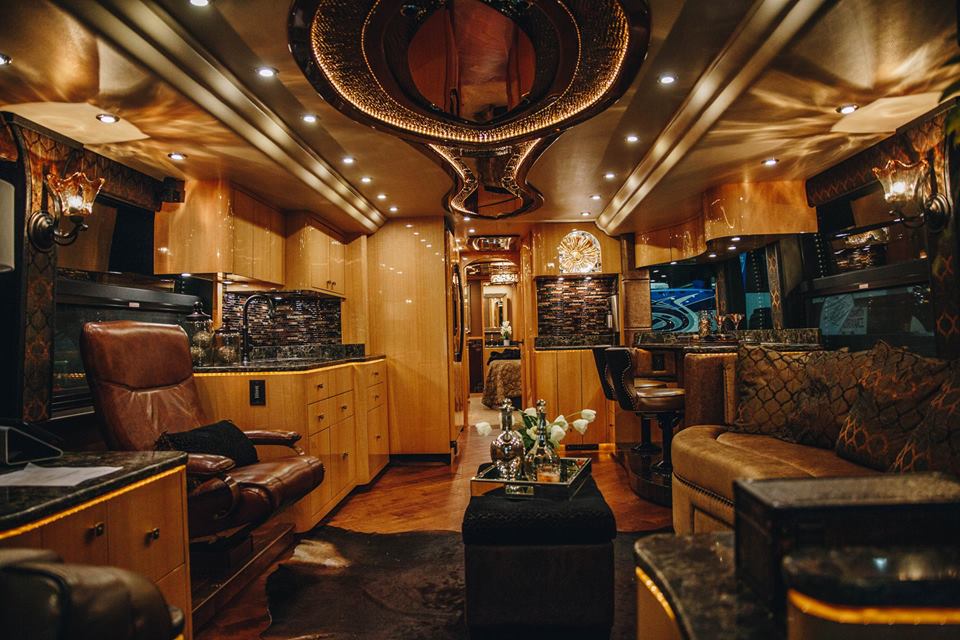 There is lots of desk space to be had. | Prevost via Facebook

Best-in-class features are plentiful on the Prevost H3-45 VIP, according to Camping World. The RV boasts the tallest bus shell at 12 feet 5 inches, and it has the largest amount of available floor space you can get on a custom conversion.

Its huge windows provide you with almost a 360-degree view, and its under-floor storage is a spacious 487 cubic feet. Inside, its appointments will make you drool — think wood floor, modern furniture, polished marble tables, and lots of desk space. 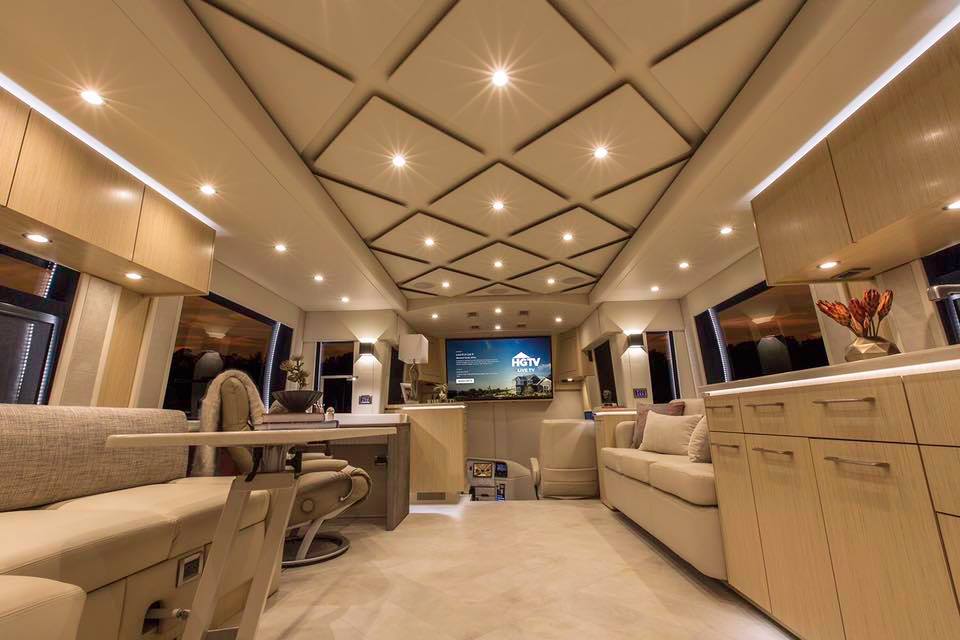 There’s a built in treadmill and a plasma screen. | Featherlight Coaches via Facebook

The Featherlite Vantare Platinum Plus uses some of the most expensive materials from around the world, according to Camping World, including Incan marble, Italian leather and suede, and Swarovski crystals.

Need some exercise? Use the built-in treadmill. Need to catch up on some shows? Watch the plasma TV that rises from the floor in front of the king-sized bed. Want to take your sports car with you? Store it underneath the coach. Seriously. 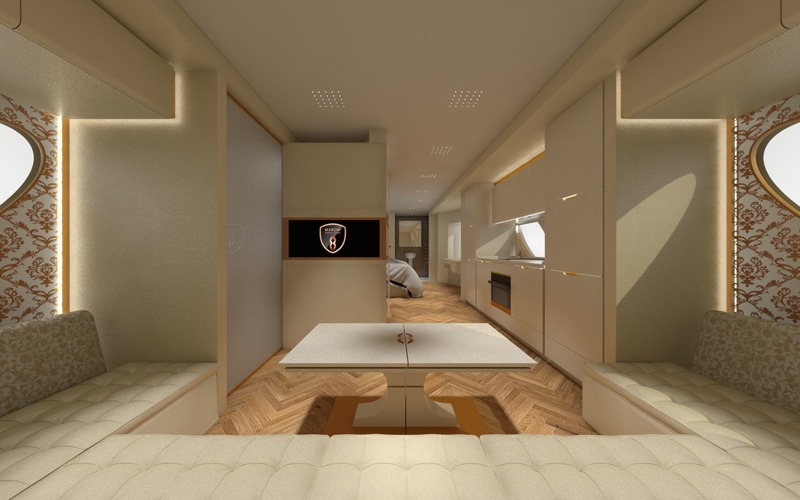 It’s the most expensive out there.  | Marchi Mobile

According to Camping World, the Marchi element is the most expensive coach on the market. Its cockpit is reminiscent of a helicopter windshield, and you can darken it by pushing of a button. The retractable Sky Lounge has integrated furniture and radiant floor heating — the perfect spot to gather.

The detail on this RV is amazing: Should you buy one, you’ll get a wine cabinet, ice maker, bar, and an adjoining spa —with a glazed rainfall shower. 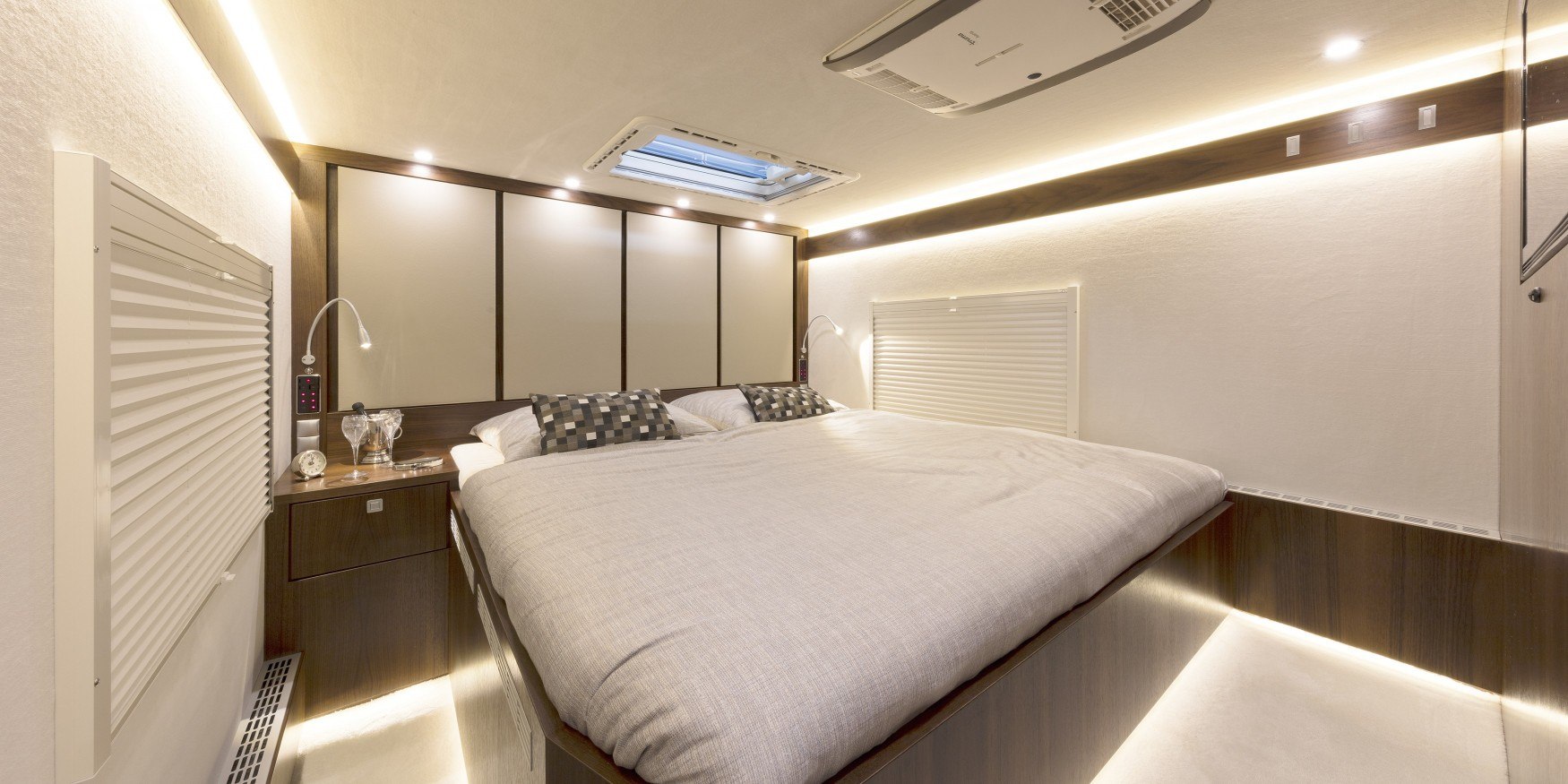 When New Atlas reported on the RVs that showed up at the 2017 Dusseldorf Caravan Salon, it noted that the Variomobil Signature 1200 had an open living area behind the driver cab, a bathroom and a rear bedroom, and a kitchen, complete with a dinette.

It also comes standard with pneumatic slide-outs that open the living area up and additional slide-outs you can use to increase interior space even more. The RV is completely custom-made, so you can get it pretty much however you want it. If you’re not into a gigantic RV, you can get this one starting at just 26 feet long. 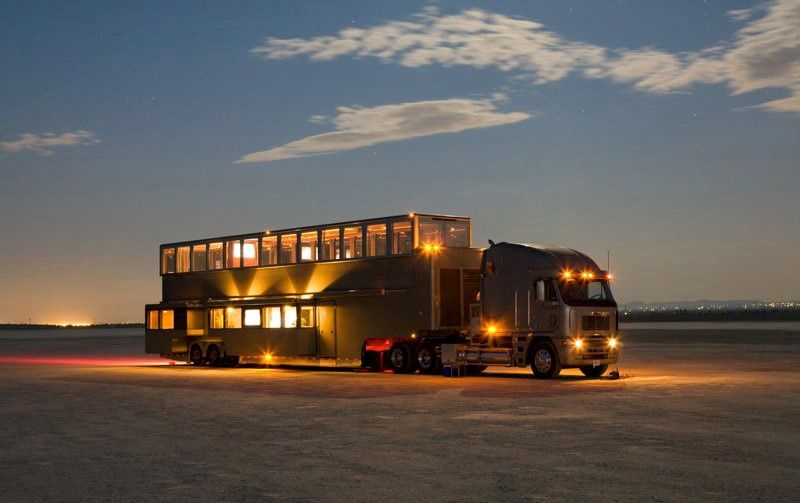 It goes with him on shoots. | Anderson Mobile Estates

Actor Will Smith take his RV, called The Heat, with him on shoots, according to is the most expensive one in the world, according to tripsavvy. His 1,200-square-foot, mobile palace weighs 30 tons and has 22 wheels on the outside, plus $150,000 worth of granite in the kitchen and bathrooms on the inside.

There’s even a second story that pops up to accommodate 30 people. And if you love watching TV, this would be your dream ride — 14 different widescreen televisions inside so you’ll never miss a thing. Anderson Mobile Estates built The Heat for a whopping $2.5 million.

Read more: What It’s Really Like to Live in an RV During Retirement, Revealed