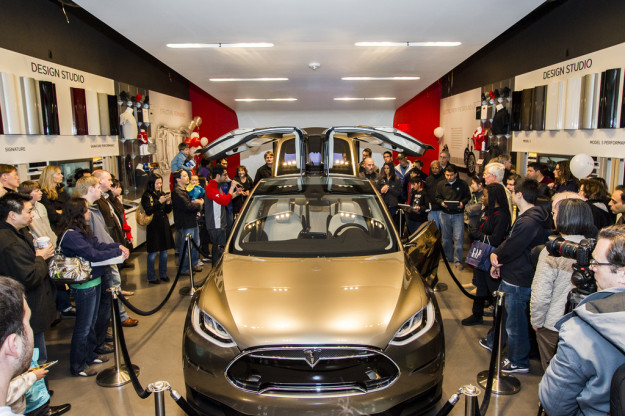 For every jab critics take at Tesla (NASDAQ:TSLA), the automaker seems to have a counter-punch ready. To cut the time it takes for drivers of the luxury electric car to restore operating capacity, Tesla is introducing a battery-swap system that would mimic the experience of a gas-station refueling — including the cost of filling a tank — yet take only 90 seconds to complete.

Tesla CEO Elon Musk unveiled the new system at a showy event Thursday night in Los Angeles, as reported by Bloomberg. Under the standard system of charging, the process of getting a Tesla to full capacity could take several hours, while the proposed super-charging stations get cars back on the road with a full charge in about 30 minutes. This swap will be handled by machines at Tesla stations and cost owners between $60 and $80, requiring about one minute and thirty seconds of a driver’s time. Tesla wants to prove it is not inconvenient to own an electric car.

Musk showed off the new method in a glitzy showcase that was a cross between a title fight and the experience of a VIP lounge. A video of an attendant filling the tank of an Audi played side-by-side with a video of Tesla machines replacing batteries in a Model S. The Tesla method ran just under 1.5 minutes, less than half the time it took to refuel the Audi. The cost of an instant battery change would be around the equivalent of a full tank of gasoline at current rates. Musk considered it another step toward changing the perception people have about electric cars.

“There are people who take a lot of convincing,” Musk told the L.A. crowd. “Hopefully, this is what will finally convince people that electric cars are the future.” Musk hinted that Tesla might be able to improve the time of 90 seconds, though it wouldn’t be a sticking point to many customers. Free charging options would still be offered alongside the automatic swap.

The new system comes at a considerable price. Tesla estimated it would spend between $50 million and $100 million on installing the machinery at its charging stations. Each battery-swap device comes with a price tag of $500,000, according to Bloomberg.

Don’t Miss: Can a $200 Million Investment Help Toyota in America?