Americans without employer-sponsored health plans are increasingly turning to the marketplace for reasonable options. Depending on where you live, you might have to pay a pretty penny even for a mid-level silver plan, with some monthly premiums nearing $500. In other areas of the United States, you can actually get a pretty good deal. Previously, we covered the most expensive places in America to buy health insurance, with Alaska topping the list. Now, we turn to the most affordable regions, many of which are located in the Sun Belt.

The Kaiser Family Foundation analyzed offerings for mid-level health plans for the second year in 2015, identifying the most and least expensive regions. The silver plans are the ones most consumers buy via the exchanges and generally cover about 70% of medical expenses. In its analysis, the Kaiser Family Foundation looked at monthly premiums for the cheapest silver plan available. Prices were estimated for a hypothetical 40-year-old patient, but in most cases, the areas with the highest and lowest premiums stay the same regardless of age. Of course, the following prices aren’t necessarily what patients end up paying because they might qualify for subsidies.

The ten most affordable regions for Americans seeking insurance via the health care exchanges boasted premiums ranging from $166 to $189 per month. This can be attributed in part to large populations and robust, competitive markets, whereas the most expensive regions are mostly rural, sparely populated areas. The cheapest silver plan for 2015 ranges in price from $488 in Alaska, to $166 in the least expensive region, a three-fold spread similar to 2014’s figures. Kaiser Health News reported in 2014 that competition in low-cost regions encouraged insurers to set lower rates.

Affordable regions also tended to have doctors paid by salary instead of the more common fee-for-service model. This practice weakens the financial incentive to perform a larger number of possibly unnecessary procedures. Several of 2014’s low-cost regions were also home to medical facilities employing collaborative patient care, allowing primary care doctors, specialists, and nurses to work together more effectively as a team. The hospitals and health system at the forefront of integrated care have rules, payment methods, and bureaucracy in place to encourage this collaboration. Innovative policies don’t always mean the lowest prices, of course. Salt Lake City and Hawaii, for example, dropped off the most affordable list in 2015.

There were changes in health insurance pricing all over the U.S. between 2014 and 2015. See the Kaiser Family Foundation’s map below for the greatest changes in premiums. 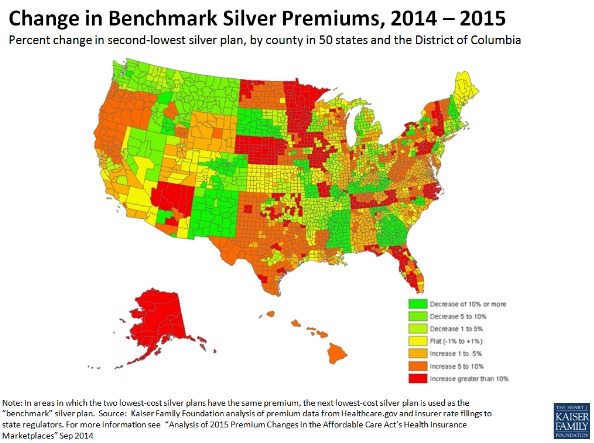 Below are 2015’s ten most affordable regions for health insurance premiums obtained through the government exchanges, based on data compiled by the Kaiser Family Foundation.

In Phoenix, the least expensive market, patients are benefiting from a type of collaboration rarely seen in the health care system: an insurer working together with a provider to drive down costs. Meritus, a nonprofit insurance cooperative, provides care through Maricopa Integrated Health System, a safety net system experienced in managing care for Medicaid patients. Tom Zumtobel, the chief executive of Meritus, said the insurer brought the plan’s monthly premium down since 2014. Meritus is working cooperatively with the health system to treat complicated cases in the most efficient manner. “We’re working together to get the best outcome,” Zumtobel told NPR.

In just a year, the affordable regions for health insurance have shifted, though not as significantly as the most expensive regions. Phoenix wasn’t even in the top ten in 2014, but Pittsburgh and Western Pennsylvania remained on the list despite minor price increases. Tennessee’s cheap premiums are notable because of the chronic health issues plaguing so many residents. Minneapolis remained on the list as well, even though its rank dropped from first to eighth after an insurer offering a $154 plan pulled out of the market. Michael Rothman of Minnesota’s Department of Commerce said the state was quick to enact cost-control measures to regulate insurers, which was key to keeping prices reasonable.