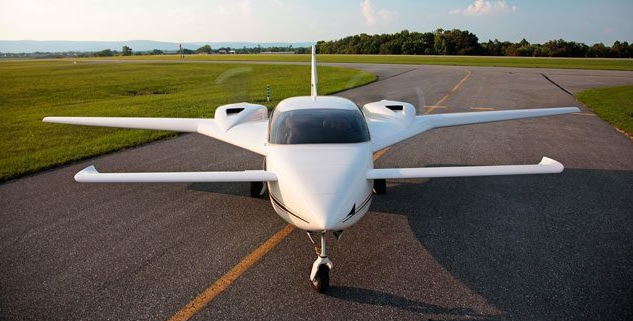 There’s been some considerable chatter about how hemp, the non-psychoactive cousin of marijuana, is going to revolutionize the economy, and pave the way for an entire new industry once it becomes fully legalized in the U.S. Now that there is actually some movement on that front, and those hoping for legalization may see their hopes materialize, enthusiasm has never been higher.

In fact, some people are taking things to the absolute limit. All the way to the sky, in a literal sense.

A recent article from Outside magazine profiled an entrepreneur who is truly taking one of the world’s most versatile resources to the next level. Instead of merely building a structure or making clothing out of hemp, Derek Kesek has plans to build an actual, functioning airplane. That’s right, a plane. Out of hemp. Well, 75% hemp, at least.

“There are many advantages to using hemp,” Kesek told Outside. “This plane project is just our first experiment with industrial hemp, and we plan to explore many uses. Once we establish structural testing and information from the hemp project, we will take that and work on the next best implication. The sky may not be the limit.”

Kesek is the founder of Hempearth, a company which is focusing on mass-producing hemp-derived products. His company has what you might expect — clothing, food, and supplements — but the airplane is, naturally, the biggest stand-out. Hempearth is based in Ontario, Canada, and is still a pretty small operation. But if there’s one way to garner attention and grow a business, it’s to charge into the game without any fear. The hemp airplane may seem like a Hail Mary, but it’s definitely noteworthy, and is a fantastic way to show just versatile hemp can be.

And that’s what truly makes the hemp plane special. Sure, it’s a rather admirable feat in its own right, but it’s also a billboard of sorts. We have talked about how a fully-legalized and regulated hemp industry could be worth billions before, and how the industry’s potential could be far beyond what anyone previously thought. The hemp plane exemplifies that perfectly.

The question is, if it’s possible to build functional aircraft out of hemp (or mostly from hemp, anyway), then how far can engineers take it?

Well, we know that houses and other buildings, along with aircraft now, can be constructed using hemp and cannabis-derived materials. But how about cars? ABC News has reported on such developments by European researchers, who are building lighter, cleaner, and more fuel-efficient cars. By replacing traditional materials like plastic and metal with plant-based alternatives, cars can be built much lighter, adding to efficiency. Oh, and after they’ve outlived their usefulness, they are biodegradable.

With planes, cars, and buildings all capable of being made out of plant matter, we have to turn to what’s actually holding up the process of having the industry streamlined. As you might have suspected, regulation and legal red tape are what’s holding everything back. But just as marijuana legalization is cascading from state to state, so too might hemp.

Kentucky had already been on the forefront of the hemp-legalization fight, and now others are following suit. The most recent state to throw its hat into the proverbial ring is North Dakota, whose governor Jack Dalrymple signed a bill putting in the foundation for a commercial hemp industry to flourish within the state. And North Dakota and Kentucky are not alone. Twelve other states are following suit, trying to revitalize their local economies by experimenting with commercial hemp cultivation.

For many, it’s important to keep in mind that these hemp laws are not meant to be packaged with marijuana legalization, although the two are closely related biologically. For states, this is strictly about adding a cash crop to their economic backbones, allowing for entrepreneurs to start businesses and provide jobs.

“This has nothing to do with marijuana or the production of marijuana in its psychoactive form,” Florida state senator Jeff Clemens told Sarasota, Florida’s own Herald Tribune. “This is a crop that can help farmers make some money and produce products for consumers.” Clemens himself is the primary sponsor of a bill to legalize hemp in Florida, with aims similar to those of Kentucky and North Dakota’s.

Clearly, hemp has a future in the American economy. We can make cars, and houses, and evidently even airplanes out of it. Will hemp spur the economy like the natural gas and oil industries have of late? It could, especially as the American economy begins to shift toward a greener, more sustainable direction.