The Mortgage Market Reeks of Mediocrity 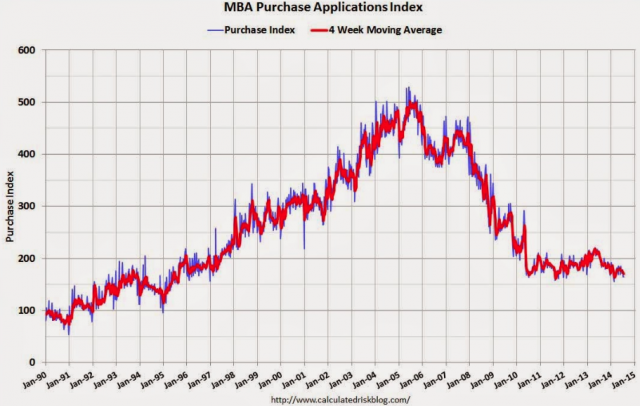 After a rough start to the year, the mortgage market is showing clear signs of mediocrity. According to the Mortgage Bankers Association’s latest update, for the week ended July 18, applications for home loans increased 2.4 percent on a seasonally adjusted basis from one week earlier.

The Refinance Index, which declined more than 13 percent over the past month, increased 4 percent from the prior week. Furthermore, the seasonally adjusted Purchase Index edged 0.3 higher. The unadjusted Purchase Index gained 1 percent compared to the previous week but was still 15 percent below the same week a year earlier. As the chart above shows, applications have struggled to gain momentum for a sustained period since the housing bubble collapsed.

Overall, the refinance share of mortgage activity accounted for 54.4 percent of total applications, up from 53.6 percent a week earlier and its highest level since March. Refinancing activity has dropped for 14 of the past 24 weeks.

It does appear that some areas of the housing market are picking up more strength. The National Association of Realtors announced earlier this week that existing-home sales increased 2.6 percent to a seasonally adjusted annual rate of 5.04 million units last month compared to an upwardly revised 4.91 million units in May. In fact, this is the first time sales reached an annual pace of 5 million units since October 2013.

“Inventories are at their highest level in over a year and price gains have slowed to much more welcoming levels in many parts of the country,” said Lawrence Yun, NAR’s chief economist, in a press release. “This bodes well for rising home sales in the upcoming months as consumers are provided with more choices.”