Why The Prevalence Of Part-Time Jobs Is A Problem 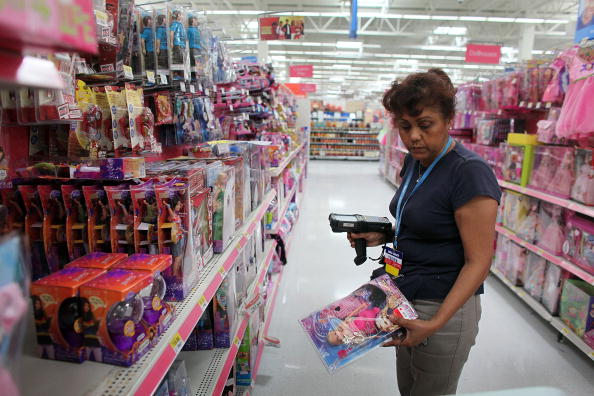 America has an employment problem. Not the kind that we are used to hearing about day after day, but a problem that has slowly set itself upon the economy, unseen to most, but used by employers and to their advantage. Many of us have been staring the issue right in the face this whole time without realizing the harm that it is actually doing, even though everyone feels the effects.

The problem is part-time employment.

Perhaps it’s not accurate to say that part-time jobs, on their own, are the main issue. It’s how part-time job designations are being used to give the appearance of economic improvement by the government. It’s how employers use part-time jobs to avoid paying people living wages and benefits, or providing healthcare. It’s how workers usually need two or three part-time jobs just to make ends meet, but employers typically don’t like it when their employees’ schedules aren’t flexible. As we can plainly see, part-time jobs have become a tool that is working contrary to the interests of the middle and lower classes.

On the other hand, there are plenty of people out there who are actively hunting for part-time work. A part-time job can be ideal for students, kids enjoying their summer vacations, working mothers, or anyone who is looking to earn a little more money to supplement the income of another, full-time gig. The issue is that part-time jobs are starting to become the new norm. Many people who want full-time jobs can actually only get part-time work, not because they want to, but because those are the only jobs available. 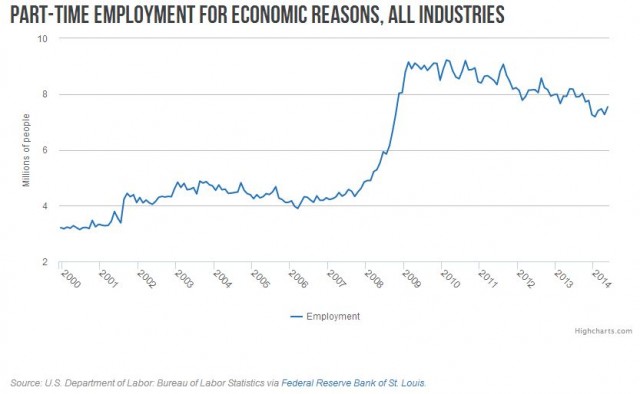 As can be seen in the chart above, from Al Jazeera America, and even more on the next page from The Century Foundation, the rise of part-time work since the recession hit in 2008/2009 has been nothing short of meteoric. While there have been plenty of perfectly plausible reasons for employers and job seekers to adapt to a higher percentage of part-time work, the idea and designation is actually starting to have major societal effects.

The economic recovery since the recession over the past several years has been well documented, and at its core has been the debate about the best way to get employers hiring again. In what was seemingly a self-fulfilling prophecy, employers weren’t hiring because they had lost a lot of customers, and customers weren’t buying anything because they didn’t have jobs to supply them with income. It was quite the pickle.

But eventually things started to get better, and employers starting bringing on new employees. Currently, the country has been able to claw at the problem and get the unemployment rate all the way down to 5.6%, according to the Bureau of Labor Statistics. The real problem has been that the jobs that are returning to the economy are not identical to the ones that left — in many respects, they are worse. The pay is lousier, the hours shorter, and the schedules are more hectic.

This is the crux of the problem with part-time work: employers are using them to get production levels back up, but it’s taking a real toll on the people who work them. Meanwhile, the government — which has a vested interest in reporting monthly gains in employment — takes credit for having created a “recovery” in the jobs market. While paying less for labor is great from the perspective of business owners, stagnating or declining wage levels are bad for everyone else. That includes the government, which sees less in tax revenue because of it. It’s no accident that almost all of the economic gains that have been captured since the economic recovery have gone to America’s top earners. 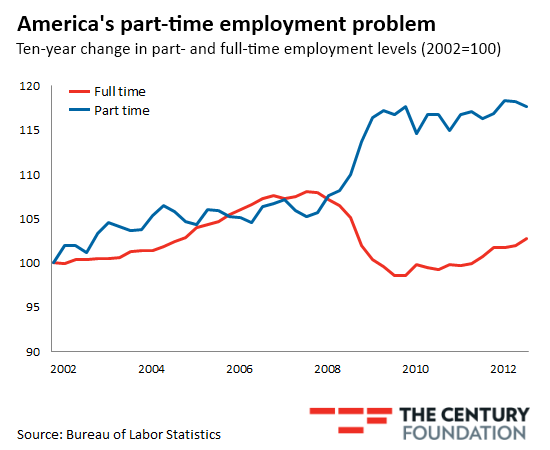 People may be getting back to work, but the prevalence of part-time jobs — with erratic schedules, low wages, and no benefits — do not foster the kind of economic resiliency that America needs. Instead, they get some people back to work while also requiring them to remain on public assistance if they can’t earn enough, while keeping corporate production and government employment figures up.

There are solutions to these issues, but like with almost every other problem the economy is facing, they are being met with fierce hostility from clashing ideological camps. Simple changes to labor laws would have some effect, such as a bump in minimum wage and an expansion of social health services and housing assistance. However, both of those examples are simply putting a finger in the dam to try and hold back the flood. What America is experiencing is a systematic and structural problem with its system of employment. Prospective employees can do plenty of things to better prepare themselves for jobs, including training, volunteering, and getting a degree, but even that does not guarantee anything. So, how do we go about restructuring the entire system?

The folks at the Economic Policy Institute (EPI) have some ideas, and they involve actually making part-time work more prevalent, in an ironic twist. “A first step would be to provide benefits to part-time workers, which could be done fairly by prorating benefits based on the number of hours worked. Perhaps more importantly, though, would be to open up new industries and occupations to part-time employment. If part-time work was available in a wider variety of occupations and industries, then these work arrangements might be seen as real choices for workers,” the EPI says.

How do we actually make that work? The EPI continues: “To accomplish this, many employers will have to adopt more flexible staffing strategies, ensuring that workers who choose part-time work do so without compromising their careers, pay, or benefits. Employers may find that increasing access to part-time work improves their ability to recruit and retain workers during periods of low unemployment, making this a winning strategy for both employees and employers.”

Perhaps the solution isn’t to abandon part-time work, but rather to embrace it. Even some big business leaders have said that the 40-hour workweek is no longer needed, so maybe we should sit back and let the robots start to take over? That may be the future, but for now, people still need paychecks. And as of now, it looks like the only way to keep the economic integrity of the country together is to either offer people better-paying part-time work with benefits, convert these part-time jobs to full time, or start some sort of government program to get people back to work by rebuilding infrastructure.

None of them seem likely given the current political climate. For now, people in need can only continue to hold on, pinch every penny, and hope for the best.