The Real Cost of Going to Prom? Finding a Date

Cars covered with Post-it Notes. Elaborate scavenger hunts. Names lit up in lights. Asking someone to prom has gotten a lot more complicated in recent years, thanks to the rise of the “promposal.”

Forget the days when all it took to ask someone to a dance was the courage to face possible rejection. Today’s teens are popping the question in increasingly creative (and social-media-friendly) ways. But finding a cute, clever, and romantic approach to asking someone to prom isn’t always cheap.

High schoolers and their parents spend an average of $324 per promposal, according to a survey by Visa. In all, teens blow a third of their prom budget just on securing a date. (This is the first year that Visa had included promposal spending in its survey).

Where exactly is all that money going? Budget-minded teens seem to be making do with handwritten signs, baked goods, and even pizza. But others are spending much more to impress their boyfriend or girlfriend. One California teen’s promposal involved a $160 dinner and a dozen roses, according to Yahoo News. Billy Kane, a high school senior in Phoenix, spent $215 to ask his girlfriend of one year to prom, though $180 of that went to a watch that also doubled as an anniversary gift. “It’s a lot, but considering it’s also a one-year gift, it wasn’t,” he told the Arizona Republic.

Spending on promposals is most expensive in the Northeast, averaging $431. That’s more than $200 more than average promposal spending in the Midwest. Canadians were the most budget-conscious prom-goers surveyed, spending just $119 on promposals and $402 in total. 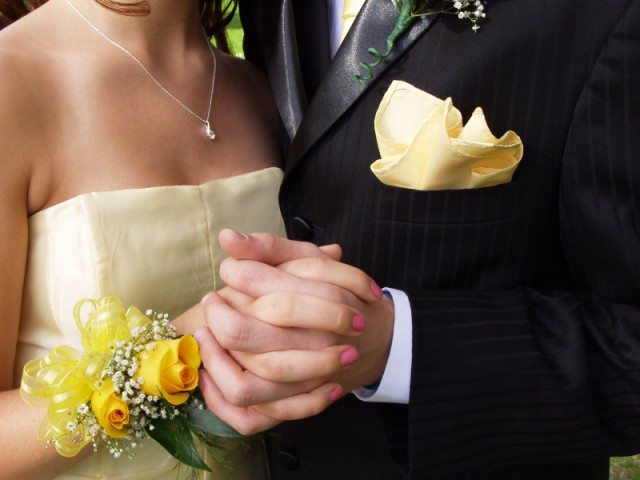 Not all over-the-top promposals are expensive. Noah Matthews, a high school junior, used a tractor to write the question “Prom?” in a field and then got a local pilot to fly him and his girlfriend above his handiwork, the Morning News in Florence, South Carolina, reported. But the stunt didn’t cost Matthews or his parents a cent – they got family friends to pitch in and pull it off.

Despite the steep spending on promposals, overall spending on prom is actually down 6% from last year, falling to $919 from $978, according to Visa. Teens and parents in the Northeast spend the most overall — $1,169 on a dress, tux, transportation, flowers, pictures, and more.

Prom spending is also highest among lower-income families. Visa’s survey found that families making less than $25,000 per year planned to spend an average of $1,393 on prom – 5.6% of yearly earnings for a family at the top end of that income range. Families who made more than $50,000 per year planned to spend considerably less, just $799. Overall, parents are footing more of the bill this year than last. Mom and dad plan to cover 73% of prom costs, Visa found, with teens responsible for just 27%.

Teens who want to have a meaningful prom experience without breaking the bank aren’t without options. Visa’s suggestions for keeping costs under control include shopping at consignment stores for attire, having a friend do makeup and hair rather than a professional, skipping the professional photos, and splitting the cost of a limo with friends. And when it comes to finding a date, teens might want to consider something personal and heartfelt over a big splurge.