The Red Flags at Six Flags: Why It’s Time to Get Off the Roller Coaster 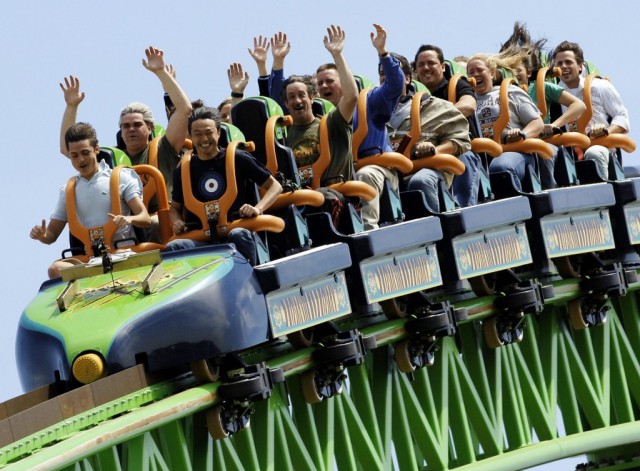 Six Flags Entertainment Corporation (NYSE:SIX) is a name we all know and most of us probably love. It the world’s largest regional theme park company and focuses on giving guests the best entertainment value for the money. However, with soaring gasoline prices and a still weak economic recovery, theme park operators face significant headwinds. However, Six Flags has managed to continue growth, even though it trades at a pricey 32 times earnings. The stock is priced for growth, and it will need to continue to deliver in order for the stock to stay elevated. Over the last year, the stock has appreciated 17 percent. However, in order for this to continue, the company needs to deliver — one mistake could send the stock down hard, and there are too many red flags right now.

So, how is the company performing? Well, its most recent quarter was moderately strong, beating on earnings, but missing on revenues. Despite a revenue miss, Six Flags saw record financial performance in the quarter as revenue grew $13 million or 4 percent to $377 million, fueled by higher guest spending. Adjusted EBITDA in the quarter was $145 million, a $7 million or 5 percent increase relative to last year. However, revenue for the first six months of the year was flat compared to 2013, although while Adjusted EBITDA increased 2 percent. For the twelve-month period ending June 30, 2014, adjusted EBITDA was $406 million and backing out special charges, the company’s modified EBITDA was $445 million. Modified EBITDA margin also remained an industry high of 40.1 percent.

What are guests doing in the theme parks? Ticket sales only go so far. But in the second-quarter, total guest spending per capita grew $4.21 or 11 percent to $43.73, with admissions revenue per capita increasing $2.56 or 11 percent to $25.15 and in-park revenue per capita increasing $1.65 or 10 percent to $18.58. Attendance for the second-quarter decreased 8 percent to 8.2 million guests primarily due to the lingering effects of the long, harsh winter that expanded school calendars and slowed early season attendance, especially among existing members and season pass holders. This latter point is key. The weather was bad no doubt, but an 8 percent decline is huge. That number is a red flag.

One strong positive was that the Active Pass Base, which includes season pass holders and guests in the company’s membership program, increased 9 percent from June 30, 2013 to June 30, 2014. That is decent year-over-year performance, and cash earnings per share for the twelve-month period ending June 30, 2014 was $2.23. This, however, is not substantial growth. During the calendar 2014, the company has invested $81 million in new capital, paid dividends of $90 million, or $0.47 per common share per quarter, and repurchased $8 million or 0.2 million shares of its common stock. The company’s net debt troubles me. At the end of the second-quarter, it has ballooned to $1.28 billion. Investing in the company’s future is a great plan, but shareholders need to watch this number closely, as well as the guest attendance numbers. Jim Reid-Anderson, Chair, President, and CEO, stated:

“We are squarely focused on executing our long-term strategy and remain confident in our ability to deliver yet another record year in 2014. The nine percent growth in our Active Pass Base, record-high guest satisfaction ratings, and robust guest spending per capita through the first six months of the year all indicate continued strength in our business. We remain solidly on track to deliver our $500 million Modified EBITDA Target by 2015.”

Looking ahead, there are numerous challenges the company faces. At 32 times earnings, the company is not delivering with the expectations the Street has for the company. I see the stock moving significantly lower, especially if the third-quarter, among the strongest for the company, is weak. I would take profits in this name until earnings rebound or the valuation of the stock becomes more reasonable.

Disclosure: Christopher F. Davis holds no position in any stocks mentioned and has no intention of initiating a position in the next 72 hours. He is a season pass holder at Six Flags Theme Parks. He has a sell rating on the stock. and a $31 price target.