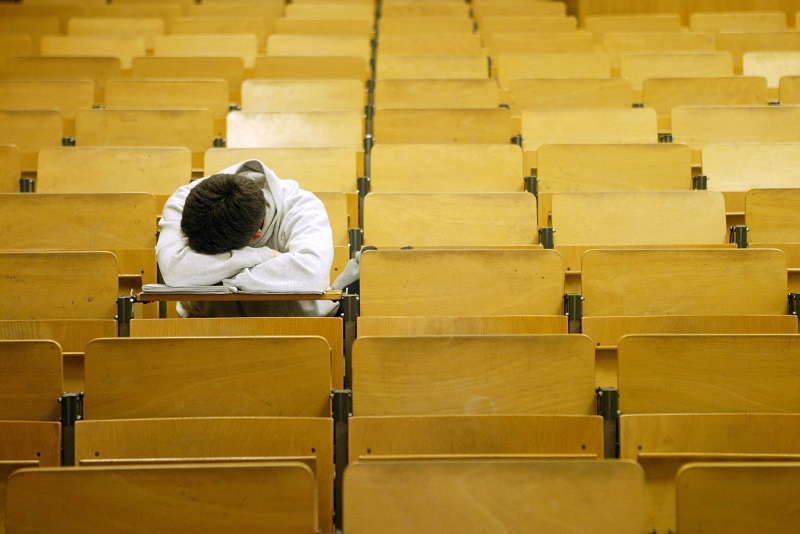 College costs are out of control, there’s no denying it. Over the past 30 to 40 years, the price has skyrocketed 1,120%, to the point where higher education is simply unaffordable for many people, and those that do take on the financial burden are now saddled with an average of $35,000 in debt.

Everyone’s aware that it’s happening, yet few have been able to really pinpoint why. There are obviously a huge number of factors to weigh — increased costs for administration, building and expansion expenses, etc. — but the true beating heart of the problem really hasn’t been singled out by a mainstream source. That is, until a recent report from the Federal Reserve Bank of New York.

The Fed’s assessment is that a vicious cycle has taken hold of the education market, and increasing costs are being fueled by an increased demand for loans and student aid. “While one would expect a student aid expansion to benefit its recipients, the subsidized loan expansion could have been to their detriment, on net, because of the sizable and offsetting tuition effect,” the study says.

In a nutshell, what’s happening is that the expansion of federal student loans and aid is causing schools to drive up what they charge in tuition. Why? Because they can, basically. It’s as simple as seeing more money available, and taking the necessary measures to secure it. In all, for every dollar awarded in grants and federally-backed loans, tuition goes up 55 to 65 cents.

“We find that institutions that were most exposed to these aid ahead of the policy changes experienced disproportionate tuition increases around these changes,” researchers write. “We find a passthrough effect of Pell Grants and subsidized loans on sticker price tuition of about 55 and 65 cents on the dollar, respectively.”

On one hand, this is sure to get a lot of people pretty ticked off. These are schools, after all, and supposedly exist for the public good. But with incredible increases in tuition making degrees and job training a huge investment in both time and money — leading to many question whether or not it’s actually worth the cost — evidence pointing to an obvious attempt by schools to turn education into a cash-grab isn’t going to sit well.

But on the other hand, it’s not all that surprising to see this kind of behavior from such large, money-hungry organizations. Imagine if these were businesses in the private sector (which you could argue that they are, in a way), up for virtually limitless government contracts. They would be acting in the exact same fashion.

Where that leaves us is right where we started: With a massive student debt problem, and no real ideas for how to fix it.

The question becomes how, or what, regulators do now that they know the very device meant to make school more affordable and accessible is actually having the opposite effect. It’d be damn near impossible to pull the plug on the whole thing at this point. That would leave the thousands who depend on federal-backing high and dry, and of course, throw the entire higher education system into flux — although, perhaps that may be exactly what it needs.

It’s an interesting question, and it will lead to even more interesting talk leading into next year’s presidential election. With plenty of clashing ideologies, particularly when it comes to education and federal spending, the Fed’s study could prove to be useful ammunition for the debates. The only downside is it will likely only inspire talk — hyped-up, non-serious talk, that is — meant to rally voter bases rather than actually address the problem.

As it stands, we’re really presented with a pickle for the ages.

Other things to take into account is just how far-reaching the effects of student debt have on graduates, long after they’ve snagged their degrees. Recent studies have shown that a good portion of millennials feel that student debt is still holding them back from officially entering ‘adulthood’. It’s also been a barrier for others that has kept them from purchasing homes and cars, or starting a family. That could possibly explain the relative sluggishness of the economy as of late.

Now that we have more insight into the problem, the solutions will come with time. But don’t expect an volunteers on Capitol Hill to take the reins in solving such an intricate and complicated issue.