These 7 Presidential Candidates Want to Give You a Pay Raise

Many Americans have decided it’s time they give themselves a pay raise. From applying to jobs with a $70,000 starting salary to protesting outside of fast food restaurants, the issue of minimum wage has moved to the forefront of the American workforce — and the political arena in the United States. With the Oval Office up for grabs in 2016, more than 20 candidates from the Democratic and Republican parties are vying for your vote.

Ideologies are different among the candidates, but it’s no question that the issue of minimum wage will an important one in the year to come. The current minimum wage, when adjusted for inflation, is worth $3 less than the minimum wage in 1968. A recent survey conducted by Oxfam America found that 87% of likely voters favor increasing the minimum wage, either to $9, $10, $12, or $15 per hour. The support crosses party lines, as 77% of Republicans and 98% of Democrats are in favor of an increase over the current federal rate of $7.25 per hour.

With that said, the incoming president will likely have a lot of sway over whether the national minimum wage raises at all, and to what degree. For now cities are taking the task upon themselves, but many advocates are pushing for a full-scale shift, which would ultimately require the president to approve.

So which of the candidates say they’re in support of giving America a raise, and which ones would rather this issue quietly go away? We’ve rounded up the list of candidates and found seven of them who are ready to boost the minimum paychecks — plus a few front-running candidates who are vocally against an increase.

Every American deserves a fair shot at success. Fast food & child care workers shouldn’t have to march in streets for living wages. -H

Clinton’s stance on minimum wage has evolved quite a bit over the past few months. Protests and walk-outs in mid-April this year forced Clinton’s campaign into publicly saying which direction the front-runner of the Democratic party leans. Clinton’s tweet above was the first show of support for low-wage workers, and her platform on the issue has only expanded.

Clinton’s approach isn’t $15 an hour for everyone, at least not yet. She supports a raise to that level for fast-food workers in New York City, but not everywhere else. “I think part of the reason that the Congress and very strong Democratic supporters of increasing the minimum wage are trying to debate and determine what’s the national floor is because there are different economic environments,” Clinton said in July, according to Mother Jones. “And what you can do in L.A. or in New York may not work in other places.”

Clinton later said she supports a national minimum wage of $12 per hour, which raises the wage floor but won’t crush smaller economies that can’t handle too large of an increase. “I think it’s going to be important that we set a national minimum, but then we get out of the way of cities and states that believe that they can and should go higher,” she said.

It’s clear that raising the minimum wage will be a big issue for Clinton’s campaign, especially as she tries to find common ground with the working class. On a mid-September appearance of The Tonight Show with Jimmy Fallon, Clinton named increasing wages as her key goal. “Raising American’s incomes,” she said in response to Fallon’s question about her main platform. “Getting more money into your paycheck so that you can have a better chance and a better shot.”

The Democratic senator from Vermont has been gaining on Clinton in recent polls, and he can top Clinton’s plan for boosting paychecks — at least in terms of the amount. In late July, Sanders introduced a bill to Congress that would increase the federal wage to $15 per hour over four years. To Sanders, making $15 per hour moves Americans into a bracket of earning a “living wage.”

“I think if you work 40 hours a week, you have a right not to live in poverty,” Sanders said at an event introducing the measure. “The current federal minimum wage is a starvation wage. It’s got to be raised to a living wage.”

Lincoln Chafee, the former governor of Rhode Island and Republican senator for the same state, has switched parties quite a bit. Chafee isn’t as outspoken about minimum wage increases as his forerunning counterparts, but he did sign a bill during his time as governor that raised Rhode Island’s minimum wage to $9 per hour, a $1 increase from what it was before.

During his time as senator, Chafee also voted to increase the federal minimum wage.

The former governor of Maryland showed strong support for raising the minimum wage to $15 per hour in July, directly after Clinton evaded a question about that amount at a separate event. “I strongly support the national movement to raise the minimum wage to $15 an hour, because it will lift millions of families out of poverty and create better customers for American businesses,” he said in a statement.

It could just be a campaign tactic for the lesser-known candidate, but O’Malley also increased Maryland’s minimum wage from $7.25 to $10.10 per hour during his term as governor. O’Malley’s statement came at a key strategic point, but the candidate was vocally in favor of the hike to $15 per hour before he officially declared his intent to run for president.

Like many of the overshadowed Democratic candidates, Webb hasn’t been given a lot of public airspace to discuss his views on much of anything. let alone his thoughts on minimum wage. Webb, a former Democratic senator from Virginia, is largely focused on matters of foreign diplomacy. Though he supported bills that would raise the minimum wage in the Senate, there’s very little information about what he would do on a federal scale if elected president. 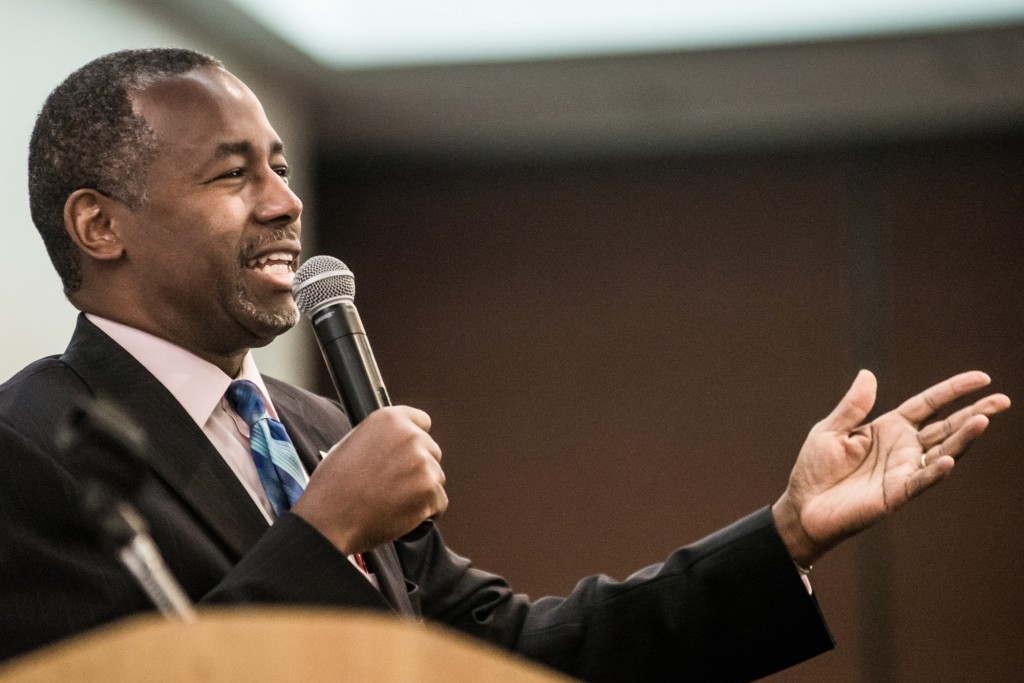 Not only that, but Carson went on to say, “And we should index [the new federal minimum wage] so that we never have to have this conversation again in the history of America.” In other words, Carson is in favor of raising the minimum wage, and then tying it to other economic factors (likely inflation) so that the minimum wage continues to increase at a steady pace, year after year.

Santorum said during the CNN debate that the party needs to be concerned about everyday people, not just the companies who employ them.

Essentially, the Republican party doesn’t believe in a floor wage for workers, Santorum said. “Fine, you go and make that case to the American public. I’m not going to. Not from a party that supported bailouts … not from a party that supports special interest tax provisions for a whole bunch of other businesses. But when it comes to hardworking Americans who are at the bottom of the income scale, we can’t provide some level of income support.”

Don’t get too excited about Santorum’s support, however, especially if you’re looking for a big payday. Santorum’s current model would increase the federal wage by just 50 cents, and over three years.

The Donald might be a gift from above to late-night television, but he certainly won’t be crusading to increase the minimum wage anytime soon. Always the businessman first, Trump said in an interview with MSNBC that raising the minimum wage would make it harder for American companies to compete with other businesses abroad, who are able to pay their employees much less. As a result, their products and services can be sold for a cheaper amount.

“Having a low minimum wage is not a bad thing for this country,” Trump said. “We can’t have a situation where our labor is so much more expensive than other countries’ that we can no longer win.”

Former Florida Governor Jeb Bush and current Ohio Governor John Kasich haven’t gone that far, but Bush has said the issue should be left up to the states, and Kasich has said the wage shouldn’t be raised “willy-nilly.” Though Kasich hasn’t said much on a national scale about minimum wage, Ohio’s wage does increase gradually with the Consumer Price Index.