These Are the Americans Obamacare Forgot

Despite the lofty goals of the health care reform championed by President Barack Obama, approximately 5.2 million Americans will fall through the cracks of system. Since the Affordable Care Act was designed as a build-on to the existing system — filling in the gaps left by Medicare and Medicaid to expand health care coverage to America’s millions of uninsured — the reform is “a complex and somewhat ugly patch on a complex and somewhat ugly system,” according to Princeton University’s Uwe Reinhardt.

The Affordable Care Act was designed to make affordable health insurance accessible to most all Americans via a two-part system: the expansion of Medicaid and the creation of insurance exchanges where individuals will be able to comparison-shop for health insurance policies in online marketplaces where their collective bargaining power will theoretically foster competition and drive down prices.

Subsidies in the form of tax credits were also included to make coverage more affordable for the exchange enrollees who earn between 138 percent and 400 percent of the poverty level. The expansion essentially sets a national Medicaid income eligibility level of 138 percent of the federal poverty level, or about $27,000 for a family of three for adults. Historically, Medicaid eligibility was restricted generally to low income individuals in a specified category, such as children, their parents, the aged, or individuals with disabilities.

Now, because of both the intrinsic qualities of the United States’ federal system of government and the very partisan reaction the legislation has produced in state legislatures, how successful the health care reform will be depends largely on the state of an individual’s residence.

When President Barack Obama signed the health care reform into law on March 23, 2010, fourteen state attorneys general filed lawsuits against the law on the grounds that the law’s requirement for most Americans to purchase health insurance was unconstitutional, even though it had been central to the GOP’s health-care reforms for two decades.

In response to the legal opposition, Erwin Chemerinsky, the dean of the law school at the University of California at Irvine, told the New York Times, “There is no case law, post 1937, that would support an individual’s right not to buy health care if the government wants to mandate it.” Indeed, Chief Justice John Roberts sided with Justices Ruth Bader Ginsburg, Sonia Sotomayor, Stephen Breyer, and Elena Kagan in deciding that Obamcare was a valid exercise of Congress’s power to tax, meaning the government could require individuals to purchase insurance or face a tax penalty.

What the court did rule unconstitutional was the mandated expansion of Medicaid, finding that taking away all of a state’s funds for its entire Medicaid program because it refused to make the expansion would be coercive. Instead, the Medicaid expansion was made optional.

Twenty-six states decided not to expand Medicaid insurance programs for the working poor even though the federal government will provide 100 percent of the necessary funding for the first three years of expansion, after which the compensation will be phased down to 90 percent by 2020. 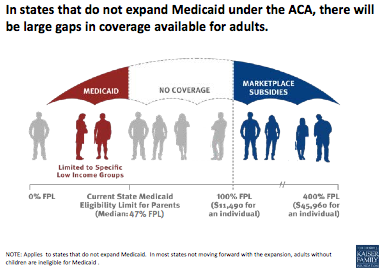 Expansion of Medicaid was meant to provide health insurance to the working poor. In states that rejected the expansion, many of those who earn little more than the federal poverty level will likely find it difficult to pay the premiums of policies purchased via the individual exchanges, meaning that millions of adults will have limited — if any — options for health coverage. They earn too little to qualify for federal tax subsidies and too much to be eligible for Medicaid, leaving a coverage gap.

According to research conducted by the Kaiser Commission on Medicaid and the Uninsured, Alabama, Louisiana, Mississippi, and South Carolina will be particularly hard-hit. Around one-third of those currently without coverage will be left uninsured by those southern states. Mississippi has the highest percentage of uninsured adults in the coverage gap with 37 percent, Alabama has 36 percent, Louisiana has 34 percent, and South Carolina has 33 percent. In Texas, more than a million people would have become newly eligible for Medicaid, leaving the state with the highest number of people without access to health insurance of any state, and the 763,890 individuals without access to health insurance in Florida make up the second-highest total of any state. 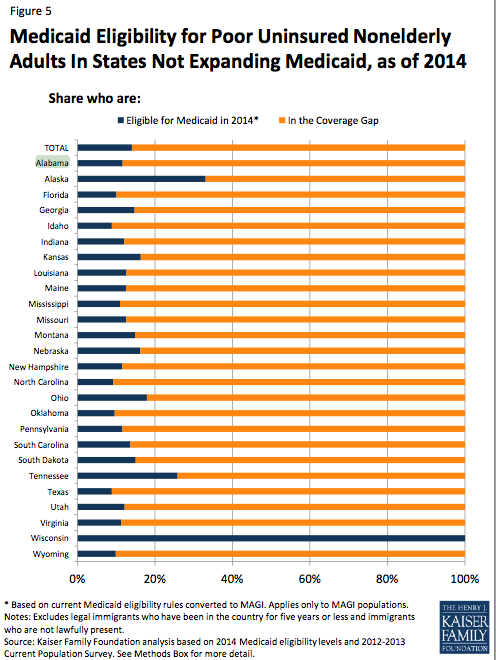