These Companies Fund the Clintons to the Tune of $25 Million 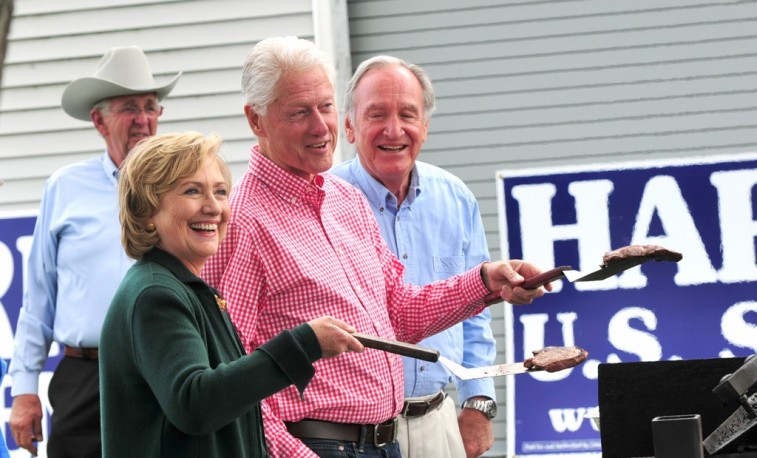 Hillary Clinton — former First Lady, Senator, Secretary of State, and possibly the next president of the United States — wants voters to forget about the huge sum of money that flows between America’s largest corporations, the $2 billion Clinton Foundation, and her and Bill’s bank accounts. That is one reason her campaign is attempting to brand Clinton as the pro-small business candidate. “I want to be the president for small business, because that’s where most jobs get created, and that’s where I think the real engine of economic recovery and growth comes from,” she said at a May 5 speech. But the complex Clinton financial network is only coming into sharper focus.

The relationship between the likely Democratic nominee for president and the corporations that donated to the Clinton Foundation, lobbied the U.S. Department of State during Hillary Clinton’s tenure, and paid the Clintons princely sums for speeches are under the lens of national scrutiny. Donations made by foreign governments, such as Morocco and Algeria, are a second, equally complex, chapter in this saga. There is no smoking gun pointing explicitly to corruption. The accusation — or supposition rather, as nothing has been firmly uncovered — is that companies like GE gave money to the Clinton Foundation in hopes of obtaining, in return, unprecedented access to and the attention of the Hillary Clinton-led Department of State or perhaps even her future presidential administration. After all, the foundation gave interested parties a way to donate to Clinton without actually making a political contribution to her. Analyses of the Clinton Foundation data show that at least 181 companies that donated to the Clinton Foundation also lobbied the State Department during her tenure.

While there is no evidence of wrongdoing on the part of Hillary Clinton, the tangled web of donations, speech fees, and lobbying does map out the size and scope of the symbiotic relationship between the Clintons and corporate America. Exploring this relationship is important because it relates to the routine corruption that propels presidential campaigns in the United States. Of course, there is a chance that those who donated to the foundation did so with the sincere intention of assisting the causes the foundation supports. But it is also just as likely that donations were made to the Clintons for a purpose. “These titans and institutions weren’t donating to Clinton Foundation just because they liked the Clintons, they were donating to the Clinton Foundation because they wanted the Clintons to like them,” explains Vox’s Ezra Klein.

The Clintons’ speech-for-cash gigs suggests even more symbiosis. New evidence shows that Hillary Clinton personally took money from companies actively seeking to influence her politically. While Hillary Clinton has spent the last two weeks soliciting millions of dollars worth of campaign contributions from wealthy donors like Beyonce, the media focus has been on her post-State Department speaking career. The problem is not her wealth, but which companies and executives may have her ear.

Together, Bill and Hillary Clinton have made more than $25 million since January of 2014, from about 100 speeches. In addition, Bill earned $104.9 million between January 2001 and January 2013. Hillary’s financial disclosure form filed with the Federal Elections Committee on May 15 shows just how different a world the Clintons inhabit than the average American voter. And if any other proof is needed to show how out of touch the Clintons can be, see Hillary’s ‘dead broke’ comment. “The Clintons’ claim that staggering amounts of income from paid speaking fees that raise ethical questions and potential conflicts of interest is simply to ‘pay our bills’ shows how out-of-touch they’ve truly become,” Republican National Committee Chairman Reince Priebus told Bloomberg, referring to the “I gotta pay our bills” explanation Bill Clinton gave ABC News. But that is not the major issue. More importantly, the report serves as evidence that Hillary Clinton is beholden to special interests.

Hillary’s financial disclosure shows that companies and organizations including eBay Inc., Deutsche Bank AG, the California Medical Association, and Scrap Recycling Industries all made speech requests to the former secretary of state, who accepted fees of ranging from $100,000 to $500,000. Bill Clinton gave paid speeches that were funded by UBS Group AG, Jefferies Group LLC, Apollo Management Holdings, and other similar groups.

To further examine the nuances of Hillary’s close business relationships, here is a look at the American companies who hire the Clintons for speeches. The following list is by no means comprehensive, but it highlights specific examples to better understand how corporate America is involved with political decision-makers.

Together, the lucrative paychecks of both Hillary and Bill highlight just how the couple relied on the same network of corporations and wealthy individuals to finance their political careers, philanthropic efforts, and personal lives.

Editor’s note: The original title of this article mistakenly said “$25 Billion” instead of “$25 Million”.