Survey: Corporations Are Headed in the Wrong Direction 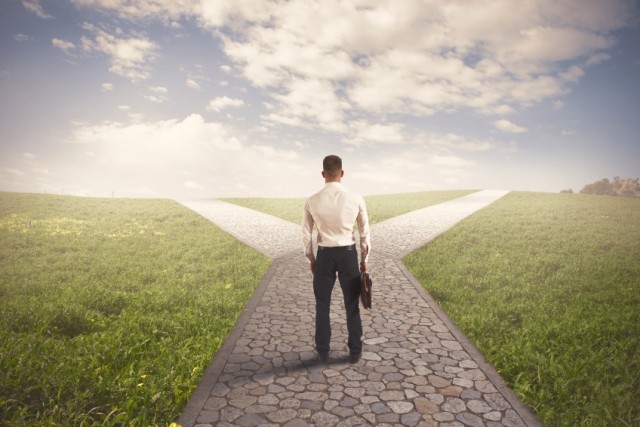 Not too long ago, a survey detailing American’s sentiment toward corporate America was released by JUST Capital, a non-profit founded by a long-time hedge fund manager. In an effort to see how people view ‘justness’ in the business community, the JUST survey involved “over 43,000 respondents in total, the research produced a detailed understanding of how the U.S. public, and many subgroups within it, view publicly traded corporations today.”

“Across the ideological spectrum, from respondents identifying themselves as ‘very liberal’ to those saying they are ‘very conservative,’ a majority of Americans believe the behavior of large corporations in this country today is headed in the wrong direction,” the study reads.

Take a look at the visuals: 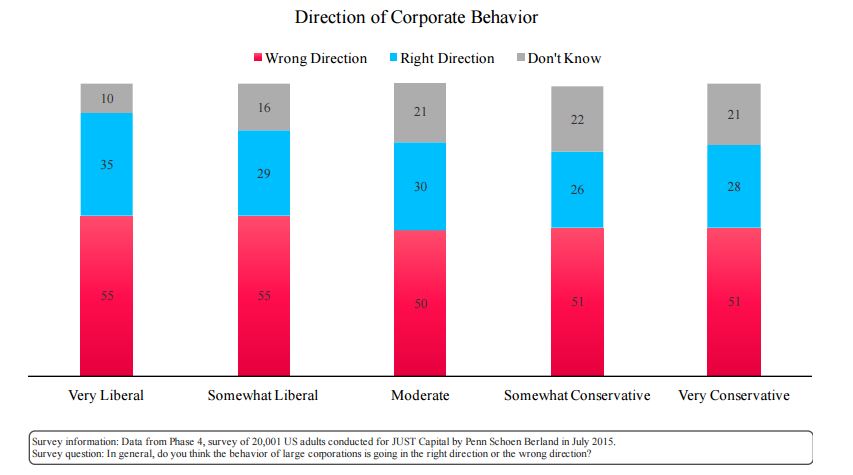 The feeling is evidently cross-generational, as well. 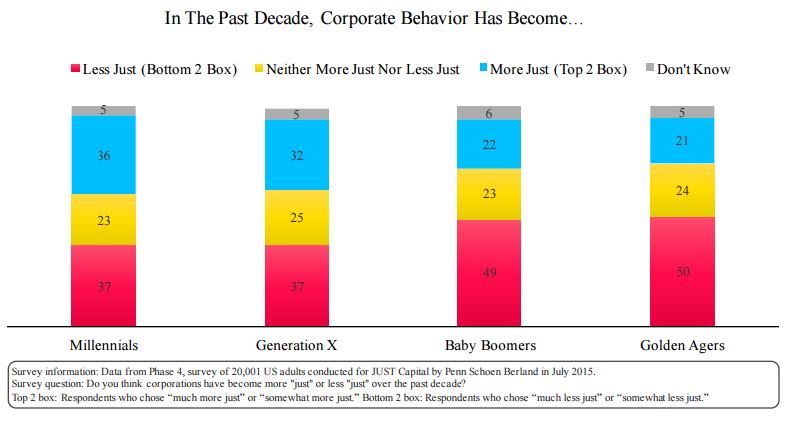 Though there was some variation across earnings strata, both wealthier and poorer Americans feel business leaders should refocus their goals. “Both respondents earning above $75K per year in income and those earning less feel corporations should ideally prioritize customers, communities, employees, and the environment more than they do now,” the study says.

Obviously, there’s a lot more to the survey, so be sure to dig into it for yourself. But right off the top, it’s clear that Americans are feeling somewhat at odds with big business. There’s plenty of reason for that — just look at the headlines almost every day. While many business leaders have adopted Milton Friedman’s “companies only exist to increase profits for shareholders” mantra, the people clearly feel differently.

There’s a lot of negativity that can be taken from the survey, and from simply reading the headlines. But how about taking a more positive approach? That is, what can we learn from the JUST Capital survey? If anything, it’s that opportunity abounds for the next generation of innovators.

Essentially, this is the decision that is going to fall upon the next few waves of business owners, entrepreneurs, and innovators. If we look to the Just Capital survey as any kind of indicator — not to mention an overall negative sentiment swirling around the public — there is an incredible opportunity to turn things around by being ethical, sustainable, and forthright.

In a world full of Enrons, endless Wall Street scandals, and Martin Shkrelis, simply being decent is enough to put you ahead of the curve.

We’re seeing a little big of this already. Just look at any number of companies operating on more sustainable models, or even ‘socialpreneurs’ or ‘conscious capitalists’ who have set out with the goal of having a positive impact while making money at the same time. Companies like Tesla, Google, and Apple — while they all have their problems, are simultaneously making the world a better place.

And there are tons of opportunities for entrepreneurs to jump into the mix. We need technologies to fight climate change. We need cleaner and more efficient renewable energy sources. We need to find ways to battle droughts.

Think about it this way: when a coal company dumps toxic sludge into a river, or fracking and oil companies render entire plots of land inhospitable and useless, or even when somebody jacks the price of lifesaving medication up by 5,000% for nothing other than personal gain, it’s an opportunity for someone to find a way to fix it. And if you’re able to come up with a creative solution, it’s probably going to make you rich.

The world is rife with big problems that are begging for solutions. Finding those solutions (and mining asteroids) is going to berth a new generation of billionaires, if not trillionaires.

The point is, just because people have a negative view of corporate America now, doesn’t mean it has to be a lasting sentiment. Things can change, and they’ll likely have to if we plan on maintaining our current lifestyles into the future. The Just Capital survey is a wake-up call — the next generation of leaders would be wise to understand what has people so upset, and work to remedy it.