Presidential staffers often visit different corners of the globe for government business. While many taxpayers don’t typically think anything of these trips’ cost, some may raise eyebrows when a spouse decides to join in. Here we’ll feature several Donald Trump staffers who have come under fire recently for traveling with their spouses on the taxpayers’ dime.

See which officials were reportedly ousted for bringing their wives on government trips (pages 3 and 4). Even Melania and Ivanka Trump have come under fire for their travel habits on the taxpayer’s dime (pages 6 and 7). Wife of Housing and Urban Development Secretary Ben Carson has created controversy as well, for her own reasons (page 8).

Interior Secretary Ryan Zinke’s wife Lola Zinke was criticized for joining him on a trip to California to meet Gov. Jerry Brown. She tweeted a photo from Brown’s office and also joined Ryan on official visits to Yosemite and other national parks, records show. She also went along on an official trip to Norway, Greenland, and Alaska.

While the department says she paid her own way, records show the Interior department used staff time to coordinate some of her activities she traveled with her husband.

Next: Another wife under fire for a trip documented in a social media post 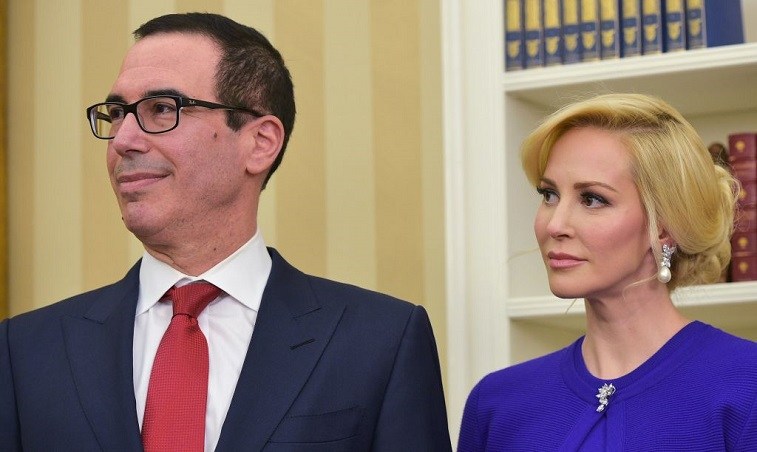 Like Lola Zinke, Treasury Secretary Steven Mnuchin’s wife Louise Linton also got into trouble via social media, when she shared an Instagram photo of herself stepping off a government plane toting a designer Hermes purse and silk scarf — all while on an official business trip to Kentucky in August 2017.

An Instagram user from Oregon commented, “Glad we could pay for your little getaway. #deplorable.” Linton fired out a sarcastic reply: “Aww!!! Did you think this was a personal trip?! Adorable?!” She later deleted the post, and a Treasury spokesperson said the couple was reimbursing the government for her travel.

Next: Fired over his wife’s travels?

Whether David Shulkin resigned or was fired depends on whom you ask, but he left his job in March 2018 after an inspector general report accused him of bringing his wife, Merle Bari, on a taxpayer-funded, $122,000 business trip to Europe in summer of 2017.

Shulkin may have doctored an email and made false statements to justify his wife’s presence on the 10-day trip, The Washington Post reported. After the allegations surfaced, Shulkin wrote a check to reimburse the government for Bari’s travel, his lawyer said.

Next: Another frequent traveler whose leaving was a mutual decision

Embattled Health and Human Services Secretary Tom Price resigned in September 2017 amid outcry over his extensive use of taxpayer-funded charter flights. His wife Betty Price accompanied him on military flights to Europe and Africa, while other delegation members flew commercially. He racked up more than $1 million in travel costs, reports said.

Upon resigning, Price apologized and said he would write a $52,000 check to cover some of the costs. “I’m not happy … I was disappointed,” Trump commented on Price’s travel expenditures.

Next: She travels and has a support staff.

CIA director Mike Pompeo’s wife Susan Pompeo has an unusually active (albeit unpaid) role at the agency, sources told CNN. In 2017, she traveled with her husband to England to meet an intelligence official. She also joined him on a tour of a British military base.

While some questioned why the agency devotes resources to her (she also has a support staff in the CIA office), the agency regularly reviews her husband’s work and travel, and the couple has reimbursed the CIA when necessary, a spokesperson said.

Next: The cost of protecting the president’s kids

Ivanka Trump’s trips have been criticized as well. | Ivanka Trump via Instagram

Taxpayers reportedly spent more than $300,000 to send Ivanka Trump, her siblings, and their families on a ski trip to Aspen, Colorado in 2017. This included $195,000 in housing costs, $26,000 on Secret Service rental vehicles, and $22,000 to protect the family while skiing. The trip required 100 agents to travel with the group, reports said.

In addition, when Ivanka and husband Jared Kushner travel for pleasure, taxpayers are more than likely footing at least part of the bill because Secret Service agents accompany the couple on the trips, Newsweek reported.

Before she officially moved into the White House, First Lady Melania Trump took 21 flights over three months to and from New York City, Florida, and Washington D.C. This totaled $675,000 in travel expenses, The Wall Street Journal reported.

Melania spokesperson Stephanie Grisham defended the first lady’s frequent travel. “It is no secret that Mrs. Trump lived in New York City the first few months of the administration so that her son could finish school,” Grisham said. “[Melania was] putting her son first while also fulfilling some of her duties as first lady.”

Next: HUD secretary under fire over a pricey dining room set

Housing and Urban Development Secretary Ben Carson was under fire in March 2018 surrounding a $31,000 dining room set purchased for his office. “I left it to my wife,” Carson told a House panel. “I dismissed myself from the issues.” Candy Carson soon became the subject of news headlines and late-night punchlines over the purchase.

Ben canceled the order once he realized the price tag, he said. The money was returned to the U.S. Treasury.