This One Trick Is Helping Americans Save More for Retirement

Incentives are a powerful force in economics. They motivate market participants to perform actions they otherwise might not take. However, sometimes incentives alone are not enough to produce significant changes. Saving for retirement continues to be a major obstacle for millions of Americans, but one relatively new tactic is helping Americans save for the future.

Where tax incentives and financial planning tools fail, auto-enrollment plans are succeeding. More Americans are saving for retirement courtesy of 401k plans that automatically enroll employees. According to a recent analysis by Vanguard, more than half of all contributing participants in 2013 were in plans with auto enrollment, while 62 percent of employees participating for the first time last year were in plans that had adopted automatic enrollment.

Jean Young, lead author of the Vanguard report, explains that, “401k and other defined contribution plans have enabled millions of American workers to accumulate savings for retirement. Automatic programs have played a key role in this success.” Overall, 34 percent of Vanguard plans adopted auto enrollment by the end of 2013, up from 24 percent five years earlier.

Considering both employee and employer contributions, the average total contribution to participant accounts in 2013 was $8,327, up 3.4 percent from a year earlier. Approximately 60 percent of account contributions were employee-elective contributions and 40 percent were contributed by the employer. 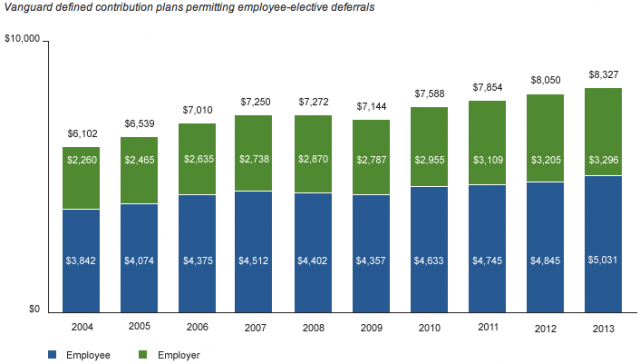 “A quarter of Americans are estimated to be partially prepared for retirement but need help getting the rest of the way. Another quarter are thought to be at risk for not being able to save enough for retirement altogether. Employers can do more to help both of these groups by enhancing their plans with features like automatic enrollment, annual saving increases, and balanced default investment options,” notes Young.

Why do so many Americans need auto-enrollment plans in order to save for retirement? There are three reasons relating to behavioral finance, according to Vanguard.

Some employees are not active, motivated decision-makers when it comes to retirement planning. They have weak planning skills and find it difficult to defer gratification.

Faced with a complex choice and unsure what to do, many individuals often take the default or “no decision” choice. In the case of a voluntary savings plan, which requires that a participant take action in order to sign up, the “no decision” choice is a decision not to contribute to the plan.

Many individuals deal with a difficult choice by deferring it to another day. Eligible nonparticipants, unsure of what to do, decide to postpone their decision. While many employees know they are not saving enough and express an interest in saving more, they simply never get around to joining the plan or, if they do join, to increasing their contribution rates over time.