10 Reasons Why Your Grocery Bills Are So High 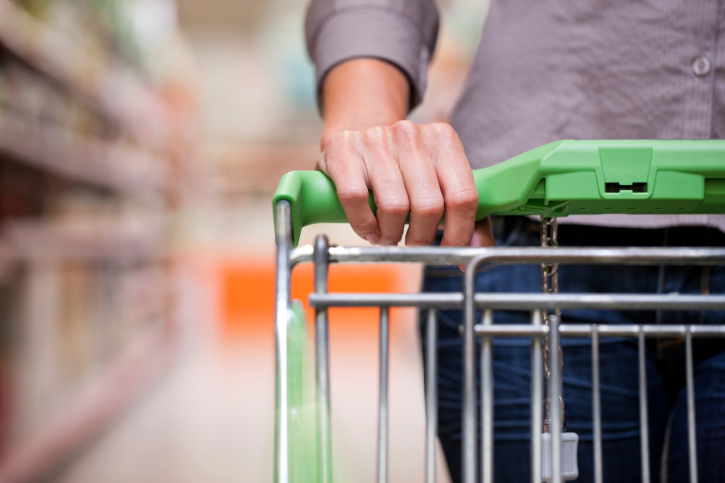 If you ask American households about their grocery spending, a large portion of them would probably say their grocery bill is higher than they’d like it to be, as evidenced by the number of consumers who actively seek discounts (at least six in 10).

Some people have expensive grocery bills because they are on some type of special diet, such as Celiac disease patients who have to buy expensive gluten-free breads and pastas. In such cases, the grocery bill is much more difficult to reduce because some of the expensive food items are, well, a necessity.

In other instances, however, people succumb to certain shopping habits that result in a higher grocery bill. These habits can be adjusted and changed so that a household can end up with a much lower food cost. For your reading pleasure, we’ve created a list of entirely avoidable reasons why a person’s grocery bill might be higher than it has to be. So, are you guilty of any of these expensive grocery shopping behaviors?

1. Not keeping track of what you buy

Keep track of your purchases to stay in control of your grocery budget | iStock.com

Before you get ready to go shopping, do you create a list of exactly which items you’re going to buy? Having a detailed list that includes which items you need, how many, and an estimated cost of each allows you to plan and budget your shopping trip beforehand.

If you stick to your list, you’re less likely to go over budget than if you arbitrarily throw items into your cart without any sort of plan. Also, calculate how much you’re spending as you go through the store. Just about every cellphone has a calculator tool ready and available for use, and if you use the calculator, you’ll know exactly when you hit your spending limit.

Be cautious when using your smartphone while shopping, though. Some of these apps can help you save money (like grocery lists and cost comparison apps), but others, like recipe apps, may make you want to spend more while in the grocery store.

According to Mother Nature Network, 51% of people say they’ve searched for a recipe on their smartphone while shopping in the grocery store. If you see a product and decide to search for a corresponding recipe, you could end up adding in $20 or $30 worth of ingredients that you didn’t plan on buying. It’s probably better to plan out your recipes before you head to the store.

When guests overstay their welcome, it can bust your budget | iStock.com/txking

When you have guests over, you’ll need to feed them. This expense adds up — especially if your guests eat a lot or overstay their welcome. Over time, having another mouth (or mouths) to feed can put significant strain on your budget. You can fix this problem by extending less invitations to people. You could also ask frequent visitors to bring their own food or contribute to the grocery bill.

Certified life coach and relationship expert Marie Dubuque advises addressing the issue of splitting the grocery bill well before your visitor stays at your house. Don’t assume he or she will bring it up and offer to pay. Chances are, it won’t happen. You’ll be stuck with a huge grocery bill and you’ll end up harboring resentment toward your house guest.

“I would make sure you tell the person before they even arrive at your house that you want to split the grocery bill. Don’t wait until he or she arrives. Otherwise, if you don’t, you will end up resenting your friend,” Dubuque warns viewers in her video series.

3. Rushing through the store

When you rush through the store, you end up purchasing items you don’t need | Thinkstock

Some consumers go grocery shopping at 5:30 p.m., primarily on their way home from work. They’re in a hurry to get home, cook dinner, and relax. So they run through the store, searching for something quick and easy to cook that night. Without seeing what’s in their pantry and what’s not, shoppers in a hurry may have to guess and potentially buy items they don’t really need.

These shoppers in a hurry also don’t allow themselves enough time to compare prices, sizing, value, discounts, or other factors that can impact a total monthly grocery bill. Before they know it, instead of going through the express line and spending $10 on dinner for the night, they’ve got half a cart full of random items and a $100 grocery bill.

Organize your refrigerator so that you can avoid buying duplicate items | iStock.com

Do you have a habit of haphazardly throwing grocery items into your refrigerator? Without a system, it will be difficult to find what you need, when you need it. There’s nothing more frustrating than making a meal, only to realize that you can’t find a key ingredient because you ran out of it, or it’s expired.

If you constantly push older grocery items to the back of your refrigerator, you’ll end up throwing away a ton of food that went bad because you didn’t even know it was in there. Or you’ll continue purchasing duplicate items because you incorrectly thought you didn’t have what you needed. Worse yet, you could eat an expired item and end up with a really bad stomach ache. Save yourself time and money by organizing your refrigerator. This way, you won’t go broke from purchasing items you already have.

Control your portion sizes and slash your grocery bill | iStock.com

Portion control is key. Another reason you may be blowing through your grocery money is if you eat portions that are way too large. If you stick to recommended serving sizes, your food will last longer and you won’t have to buy as much when you shop. If you’re at a loss for what a standard serving size looks like, The American Heart Association and WebMD have handy guides that will show you how much you should be eating from the different food groups. Stop piling food on your plate and keep your wallet fat instead.

Shopping too often can result in a bigger grocery bill | iStock.com/Antonio_Diaz

Do you frequently stop at the grocery store to pick up small items? Making frequent trips to pick up items such as milk and bread could cause you to overspend without even realizing it. This is because each time you go to the store for a few items, you’ll likely emerge with a bag full of things you had no intention of buying. It could be a magazine, a bag of chips, or some other item that was strategically placed at the checkout counter.

Reduce your grocery store trips so that you’ll be less tempted to make an impulse purchase. Bad habits can be hard to break, so start by gradually cutting back. If you normally shop two to three times a week, cut back to once a week. You can make this possible by making a grocery list and sticking to it. This will reduce the chance that you’ll forget something.

7. Not thinking outside of the box

Look for creative ways to save money | iStock.com

Do you go to the same retailer every single time you shop? Do you buy the same items? Many shoppers get stuck in a routine in which they’ll visit the same store, buy the same products, and end up rotating through the same dinners.

According to the Food Marketing Institute, only around six in 10 (61%) of consumers said they would travel to a farther away grocery store for better prices. And although people are accepting store brands more and more, only around half of consumers (47%) think they are of the same quality as national brands.

Thinking outside of the box by changing retailers, brands, sizes, and even food items can save you money. In mid-2014, beef prices rose to record highs. During such spikes, taking advantage of cheaper alternatives can seriously reduce your overall monthly bill. 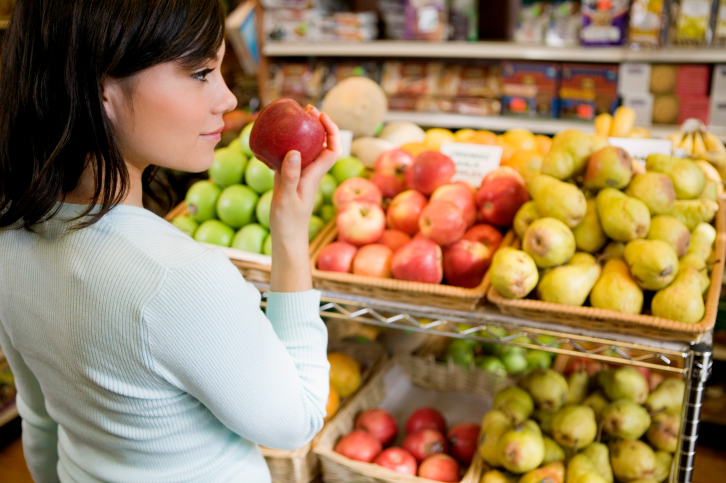 Has anyone ever told you not to grocery shop while you are hungry? Apparently, there’s some validity to the claim that hunger can impact your shopping habits. According to university study data published on Live Science, “after a mild blood sugar drop, our brains are less able to fight our desire for ice cream and pizza.”

9. Not leaving it to the pros 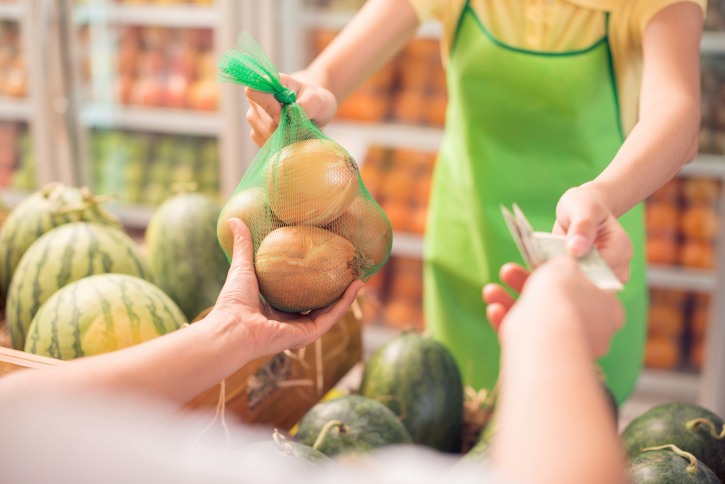 Let the pro in the house handle the shopping | Thinkstock

Sometimes, fill-in shoppers can really throw things for a loop — they don’t know the routine, and they don’t visit the store enough to know that the green tea has been moved from the soda aisle over to health foods.

A fill-in shopper also doesn’t know the little nuances of your household’s shopping habits. For instance, maybe you strategically spend $0.10 more to buy two 20-ounce cans of soup instead of one 40-ounce can because the cans are for two separate dinners.

When you fail to leave shopping to the household’s pro shopper, you may end up having to return to the store, and you can end up with a higher overall monthly bill than planned.

10. Not looking for deals

Make an effort to look for the best grocery store deal. In addition to using coupons, also seek out lower-cost versions of the foods you usually buy. For example, instead of purchasing pricey boneless chicken breasts, which can be as high as $3.25 per pound, get a whole chicken. It costs much less, at just $1.42 per pound. In addition, if you tend to eat a lot of meat, try to substitute meat-based meals with tofu instead. At $2.50 per pound, it will help you save on pricier meats such as pork chops ($3.73 per pound) and sliced bacon ($5.18 per pound).