This Is the No. 1 Way Americans Waste Their Money

Americans find a lot of ways to waste their money. If we’re not buying lottery tickets or feeding half of our paychecks into slot machines at the nearest casino, we’re finding other ways to avoid saving, or at the very least, spending responsibly. While it is difficult to become disciplined in terms of personal finance, managing your money and putting together a budgeting plan is one of the most important parts of becoming a self-sufficient adult.

And yet, even when we have financial footpaths laid out in front of us to follow, we still find ways to hemorrhage cash until we’re left waiting for the next payday. Of course, this isn’t an accurate description of everyone’s financial situation. But for a good number of Americans, living paycheck to paycheck is the reality. Getting yourself out of that cycle is difficult, but entirely possible.

One way that we’re encouraged to find sound financial footing is by making wiser decisions with the money we do have, however little it may be. An easy way to start? Make wiser decisions when spending. This is hard for most people and requires discipline. But we all do spend more than we should on certain things. The most difficult part of all is figuring out where and when we spend the most on things we don’t need.

Next: Eating your way to poverty

It’s all about food 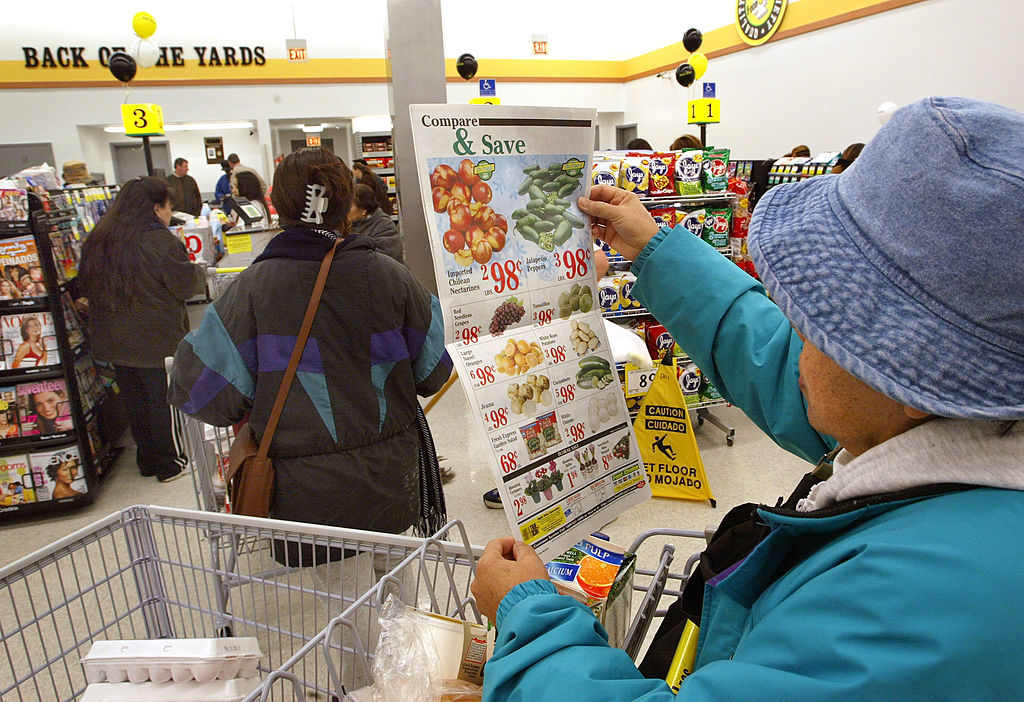 According to a study from Hloom, it’s clear where most of our wasteful spending is going: food.

Hloom’s research shows that Americans’ excess spending on food doesn’t merely come from eating out at restaurants, but from “convenience packaging” purchases, and actually throwing out or wasting the food we purchase from the grocery store. In all, there are potentially thousands of dollars to be saved every year by changing up our consumption habits.

“According to our survey,” the Hloom study says, “the majority of Americans say they waste money on unnecessary expenses: too many restaurant meals, wasted groceries, and credit card interest charges. To add insult to injury, many of these habits – from tossing out food to discarding plastic water bottles – are harmful to the environment.”

“Making some small changes can add up to big savings over time,” the study continues. “One fewer restaurant meal per week can save over $600 a year, switching electronics to sleep mode (or unplugging them), can save $100 a year, and kick that bottled water habit (because it can cost as much as 2,000 times more than tap water!).”

Next: Top 10 money wasters that people are supposedly willing to reduce 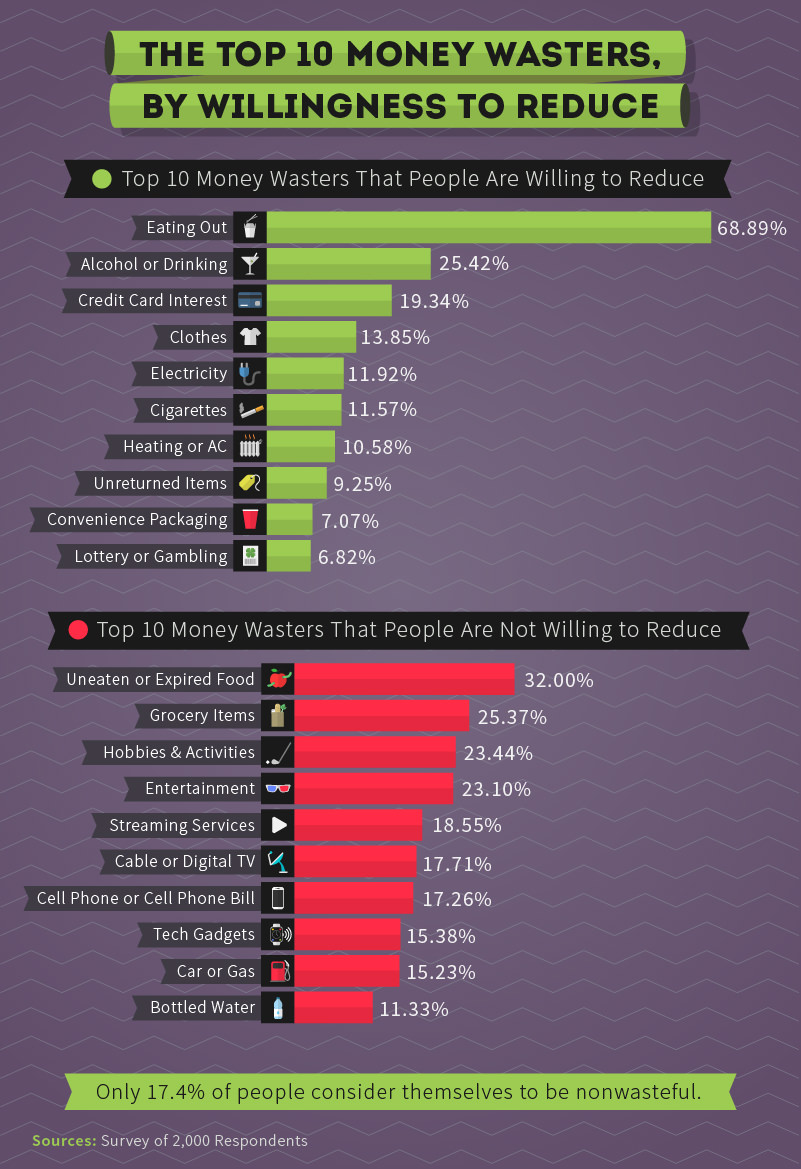 As for some visual aids, Hloom lays out the top 10 ways that Americans waste money, in terms of what they’d actually be willing to reduce to save more.

As we can see, food and drink are the top two ways in which Americans are wasting their money. They’re also the top two ways in which we’re evidently not willing to change our spending and consumption habits. Obviously, there’s going to be some spending in these areas that happens no matter what — you’re going to have food that goes bad, for example, and most people are going to plan on spending a night at the bar or a restaurant here and there.

Next: Dining out is the American way.

If we break things up by generational spending, Hloom found the following:

“All three generations rank dining out as the top way to fritter away money – but only half of baby boomers say so, compared with 62% of Gen Xers and 72% of millennials,” Hloom’s brief says. “For millennials, drinking, entertainment, and hobbies rate relatively high on the list of money wasters, while Gen Xers and baby boomers are both more concerned about credit card interest and cable TV costs. Baby boomers are the only generation of the three to rank bottled water as a concerning expense, and millennials are the only ones for whom cigarettes don’t make the cut.” 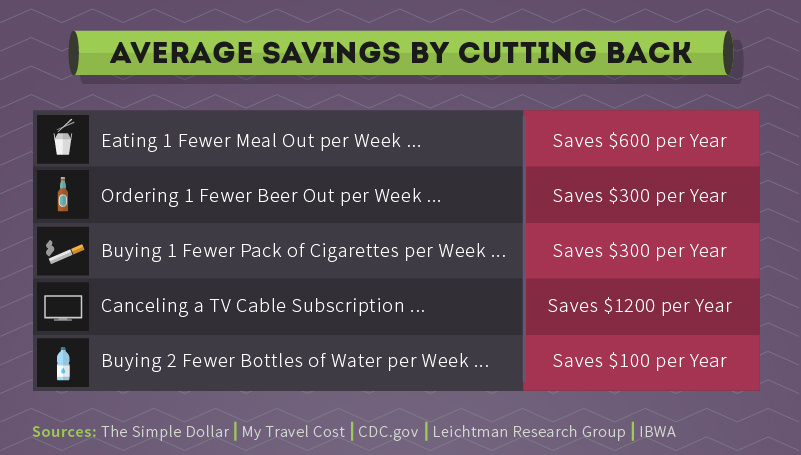 Ways to save money | Hloom

There are plenty more charts and data to dig through, so be sure to check out the entire brief for more details. But in terms of the overall trend that Hloom uncovered, most of Americans’ wasteful spending goes toward food. Again, that can include many things, such as eating out too much, wasting or having food spoil, etc. If you’re actually concerned about curbing this behavior, Hloom included this:

At the end of the day, we all know there are measures we can and probably should take to curb our frivolous spending. But it happens — it’s a part of life. And we all need to cut loose here and there and indulge a little bit. But it’s important to establish firm, disciplined financial behaviors if you plan on paying back those student loans, buying a house, or retiring someday.

Per Hloom’s study, the best place to start developing financial discipline is in our spending on food. If you focus on that, it can be an easy and important baby step toward building a stronger financial future.