The Federal Reserve has put pressure on precious-metals markets over the last few months. Although gold has been up since April, any signal that the Fed will reduce its bond-buying program could further weigh on gold and other precious metals. Silver has also been under pressure from central banks and has also felt the heat from falling industrial demand.

On the other hand, platinum and palladium could be poised for resurgence. Rising mining costs as a result of wage increases, regulations, and political risks in South Africa — which accounts for 80 percent of world platinum production and is also the second-largest palladium producer — may cause a fall in production in coming months, which is a bullish sign for spot platinum prices.

Though a pullback by the Federal Reserve (and thus a stronger U.S. dollar) could weigh on all of our metals in the short run, our long-term outlook remains intact. 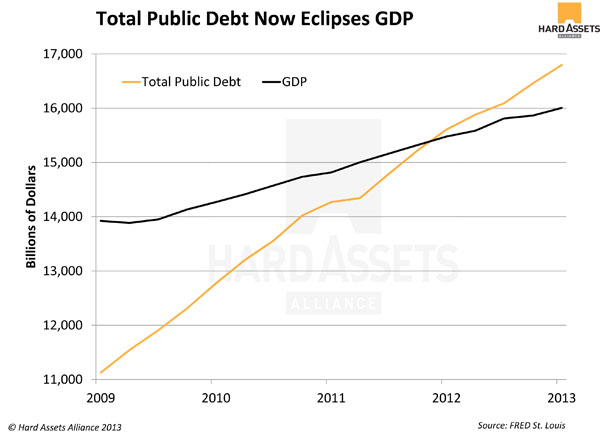 We previously warned of what can transpire when desperate governments are no longer able to shoulder unbearable debts. As one can see in the chart above, total public debt in the United States recently crossed the proverbial Rubicon and now equals 104.95 percent of GDP. Though some would argue that a healthy dose of debt is necessary to foster economic growth, the U.S.’s unsustainable public debt exceeds the same debt measures of crisis-stricken Cyprus and fragile Spain, where public debt as a percentage of GDP have been most recently estimated at 85.8 percent and 84.2 percent, respectively.

As if this weren’t alarming enough, the Fed’s official figures — which were used to create the chart above — do not include the nation’s swelling, yet politically untouchable unfunded liabilities, namely Medicare and Social Security. When these figures are plugged in to the equation, the U.S.’s public debt level skyrockets to astronomical heights. Of course, it’s doubtful that this debt will be paid off; instead, Washington will likely attempt to flush the debt down the drain by printing more worthless currency.

With the debasement of the U.S. dollar in the cards, maybe it’s time you consider moving some of your chips to a different table.

Don’t Miss: How Much Does Citigroup Stand to Lose in Egypt Unrest?