Touching at Work: How Cozy Should You Get With Co-Workers? 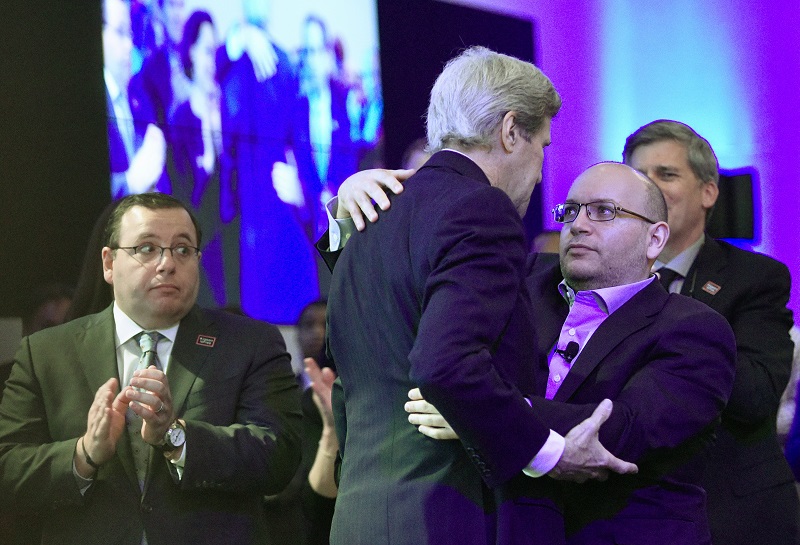 Physical boundaries in the workplace can be nebulous at times. This isn’t necessarily a good thing, considering that one wrong move or misplaced comment can be the difference between a promotion and a lawsuit. That’s why so many companies and organizations have heaps of strict policies regarding harassment, intimidation, and even inter-office relationships. Businesses need to protect themselves, and their employees, from each other by doing their due diligence.

It’s understandable, but for colleagues that have known each other for years, or who are exceptionally close, the line becomes blurred, and the boundaries a bit more ambiguous. So, how do you know where ‘the line’ is?

A good rule of thumb is probably to just keep your hands to yourself, and any thoughts that you may feel could be taken out of context, or rub someone the right away, inside your head. This, of course, leads to a rather dry and sanitized work environment, which isn’t much fun for anyone. It doesn’t hurt to give your longtime co-worker a hug on their birthday, for example, or to share a dirty joke with your desk mate.

But all it takes is one uncomfortable moment for those types of interactions to become strictly forbidden. Again – it’s hard to tell where that line is. To get some more insight as to what many professionals feel are reasonable boundaries, staffing company The Creative Group recently put together some research.

The Cheat Sheet has talked with the folks from The Creative Group before, discussing the role of contractors with one of the company’s lead recruiters. That gave us a view into how companies deal with employees who aren’t really employees – and TCG is again offering an inside look at the complicated world of inter-office relationships and communication.

At the heart of TCG’s efforts were to see when or if hugging between professional colleagues was seen as acceptable, as opposed to a hearty handshake or other forms of nonverbal communication. What TCG found was that American businesses are evidently becoming warmer, more welcoming places, by and large.

“More than half (54%) of advertising and marketing executives surveyed said this practice is at least somewhat common in the United States, up from 30% five years ago,” TCG’s press release reads, which explains the firm’s research and conclusions. “It’s a different story when it comes to meeting clients, however: More than three-quarters (77%) of respondents said business hugs are rarely, if ever, appropriate in this context, up one point from 2011.”

TCG also put together an infographic with visual explanations of the findings, which basically tells us the same thing: hugging your coworker? Okay. Hugging a client? Not really. But again, a lot of these interactions are contextual, and boundaries can be different from one interaction to the next. It completely depends.

Your best bet, if you’re unsure? Stick to a handshake.

“Business hugs may be more prevalent today, but they might not be welcomed by everyone,” said Diane Domeyer, executive director of The Creative Group, via the press release. “When greeting colleagues, consider the environment and tune into body language. Even if you’re a natural hugger, it’s best to offer a handshake when you sense a hug may make someone uncomfortable.”

The survey itself was conducted by a research team that recorded responses from more than 400 U.S. workers, all of them executives working in the advertising and marketing fields. That’s one thing to keep in mind, as the norms and customs of one industry may not necessarily transfer over to others. You might not expect to see a bunch of police officers greeting each other with hugs, for example, whereas it probably wouldn’t be all that surprising to see a group of office workers embrace.

To follow up on the survey, TCG spoke with Daniel Post Senning, an etiquette expert from the Emily Post Institute – an organization dedicated to all-things etiquette. Senning’s advice for professionals? Well, it depends.

“It’s situationally dependent,” he said. “We have the option to greet people with a handshake, a fist bump or a hug. Generally speaking, unless you’re sure it’s going to be OK to hug someone, stick with a handshake. It’s a universally accepted and globally understood gesture of goodwill and friendship, and it’s still the standard for a business greeting or introduction.”

So, what should you do if you’re anxious about a proper greeting at work? Play it by ear, and use your instincts. Defer to the handshake, unless you know the other person quite well.