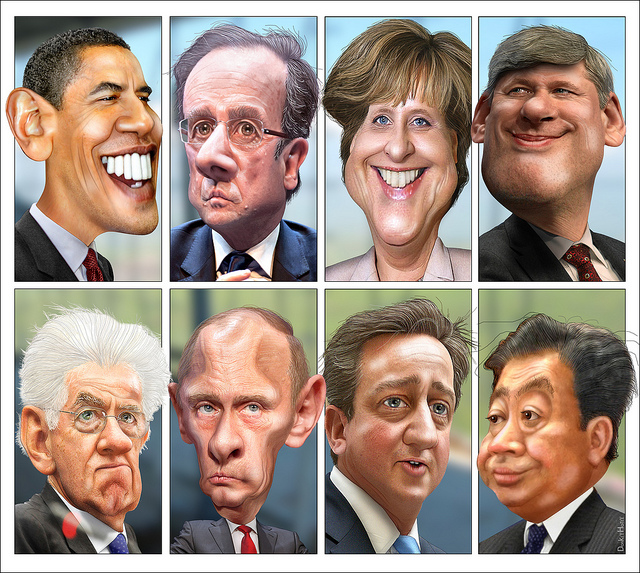 The annual Forbes compendium of the world’s most powerful people provides a snapshot of the heads of states, financiers, billionaires, entrepreneurs, and even the occasional drug trafficker whose decisions guide our world. This year’s list consists of 72 individuals — one for every 100 million people on the planet. The 17 heads of state included run countries with a combined gross domestic product of around $48 trillion, the 27 chief executive officers and chairs included control more than $3 trillion in annual revenues, and the 28 billionaires included are valued in excess of $564 billion.

United States President Barack Obama is in some storied company — the top ten features Bill Gates, founder and Co-Chair of Microsoft (NASDAQ:MSFT), Federal Reserve Chair Ben Bernanke, European Central Bank President Mario Draghi, and Wal-Mart (NYSE:WMT) Chief Executive Officer Michael Duke. But the news is that after spending two years atop the list, the American head of state sunk to the second ranking, beaten by Russian President Vladimir Putin. In fact, during his presidential term, Obama has nearly appeared in the number one spot only once before, in 2010, when the distinction went to Hu Jintao, the former President of China.

In Cold War-era America, the news that a Russian leader had edged out his American counterpart would have caused more than a few ripples. Since the end of the Cold War, at least, the title “the most powerful man in the world” has generally been attached to the president of the United States. Of course, the rankings are entirely subjective, but the fact that Putin out-positioned Obama says a great deal about how the two leaders are now perceived by their people, by the international community, and about how they use their power. To compile the list, Forbes editors consider how many people the individual in question has power over, assesses the financial resources controlled by each person, determines whether he or she has power in multiple spheres, and analyzes if the candidates actively use their power.

Comparing Barack Obama and the Russian autocrat Vladimir Putin shows leaders on far different trajectories. Moving up from 2012’s third slot, Forbes scored Putin the highest in the 2013 rankings because he makes frequent domestic and international shows his power. Take, for example, the stand off between the United States and Russia over the extradition of Edward Snowden, the former National Security Agency contractor who blew the whistle on several mass surveillance programs conducted by the American, British, and Israeli governments earlier this year, or the conflict between the two countries on how best to respond to the Syrian civil war.

In terms of the objective, absolute power, the United States’ might is unparalleled — the nation’s defense budget is greater than those of the next ten countries combined. But the fundamental truth about power is that true power resides in the perception of power and the readiness of a state to employ that power, and that truth is what the promotion of Putin reflects.

When compared to Putin, Obama has shown himself to be much more uncomfortable using the power at his disposal. Or, as Forbes described the difference between the two men, “Barack Obama is weak internationally by choice.” The president is considered the weakest of the American post-World War II presidents. “Even the in-over-his-head Jimmy Carter was more of a factor in foreign affairs than Barack Obama,” wrote Editor-in-Chief Steve Forbes. Obama is deliberately attempting to reduce the country’s global footprint because he “believes the U.S. has been a malignant force in the world,” he noted.

On the domestic policy front, Obama’s political power has been weakened by the botched rollout of the cornerstone provision of the Affordable Care Act — the online insurance marketplace. Obama’s approval rating is now 42 percent, according a NBCNews/Wall Street Journal poll released Wednesday. That level is an all time low for the president. But, nevertheless, Forbes argued that the the president wields a great deal of domestic might. “At home he’s amassing immense, unprecedented powers over the economy,” wrote Forbes. “If Congress won’t pass one of his desired pieces of legislation, he’ll try to achieve his ends through decrees, a.k.a. executive orders, or unprecedented and sweeping regulatory rulings.”

The author’s key example is the fact that the president promised repeatedly throughout the campaign for the health care reform law that if policyholders liked their insurance they could keep it. But the hundreds of thousands of policy termination notices that have been mailed out over the past several weeks showed that the administration has reneged on its promise. Of course, as Department of Health and Human Services Secretary Kathleen Sebelius told the House of Representative’s Energy and Commerce Wednesday morning, the cancellation of policies was a justifiable side effect of the health care reform because the new policies will give Americans better benefits and more consumer protections.

Or, as Democratic pollster Geoff Garin, who advocated for the health law during congressional debate, told Bloomberg, Obama’s repeated reassurances were directed at swing voters whose support was necessary for the law to be passed. In total, only three Russians aside from Putin made the list, an accurate reflection of the country’s modest economic position, while its GDP ranks around 10th on a global basis. Comparatively, Americans populated 28 of the 72 slots. In particular, corporate executives accounted for a large number of those spots, with the Google’s (NASDAQ:GOOG) Sergey Brin and Larry Page, Microsoft’s Gates, Facebook’s (NASDAQ:FB) Mark Zuckerber, and Apple’s (NASDAQ:AAPL) Tim Cook all gracing the 2013 list, an indication of the United States’ “soft power.”