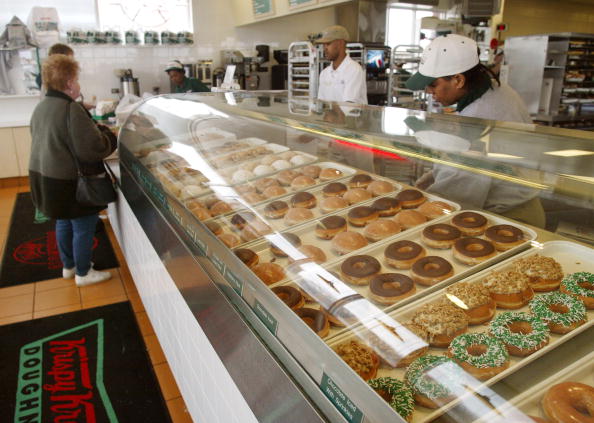 While the company grew in most major categories, this growth was not enough to impress analysts or to justify the current valuation. Despite a tepid retail environment, the company managed to grow its domestic same-store sales by 2.3 percent. However, its currency adjusted international sales fell by 2.2 percent; although as Krispy Kreme is predominantly an American company, this is not such a big deal. The company grew the number of Krispy Kreme stores to 855, which is a 3.3 percent gain. While this is good, keep in mind that the company sells a lot of products in grocery stores and convenience stores.

Net profits came in at $0.23/share, which is in-line with analyst estimates, and which dwarfs the $0.11/share figure that the company reported in the first-quarter of 2013. However, this growth was due mostly to margin expansion as the company is cutting expenses in an effort to turn a struggling business around.

The real disappointment, however, was net sales. Sales came in at $121.6 million, or just 0.8 percent above first-quarter sales a year ago. Furthermore, this figure missed estimates by over $5 million, or by over 4 percent. That’s a big miss. The company attributes some of this to bad weather, but we know that competitors such as Starbucks (NASDAQ:SBUX) did not have this problem, and so one has to wonder whether the weather excuse is valid, or whether management is just finding excuses for poor execution. Finally, management cut its 2014 earnings per share guidance to $0.69/share – $0.74/share from $0.73/share – $0.79/share.

Over the past decade or so, Krispy Kreme shareholders have been on quite a ride; first down for several years from $46/share in 2003 down to just $1/share in the midst of the financial crisis. From there, the company has been growing its sales and profits to the point that the market bid up the shares to $19 each. This recent outperformance has been the result of sales and profit increases. However, with this recent quarter, the potential for Krispy Kreme to continue to increase sales and profits appears to be jeopardized. Furthermore, excitement over the company’s recovery has sent the stock to a point of overvaluation — about 27 times earnings.

With those points in mind, it is no wonder the stock fell to just over $17/share in after-hours trading. Even though this is a nice pullback, and even though the stock has pulled back from $26/share in late December, I still think there is more room on the downside. There are three reasons for this.

The first is valuation. Even at $17/share, the stock trades at over 20-times earnings expectations, and the company simply isn’t growing quickly enough, or with sufficient certainty to justify this valuation.

Second, Krispy Kreme is by no means a “best in breed” company. Investors are better off putting their money in competitor Dunkin’ Brands (NASDAQ:DNKN) or Starbucks. These are companies that have defined its market niches and which have become market leaders. It is growing and this growth should continue into the future unabated. Krispy Kreme will have a difficult time competing with these companies — especially Dunkin Brands, which operates a very similar business with a better reputation.

Finally, people in this country and throughout the Western world are eating more healthy foods. This doesn’t bode well for a purveyor of doughnuts, which are infused with taboo food products such as trans-fats and corn syrup. Furthermore, there is very little the company can do to appeal to healthy eaters. Even if the company’s stock comes down to a reasonable valuation, and even if it comes up with a brilliant marketing campaign that allows it to compete with Dunkin’ Donuts, it simply cannot overcome this headwind.

Given all of these points and given that the company’s sales figures were so weak, Krispy Kreme is a stock that you want to avoid, and it may even be a potential short candidate for aggressive and sophisticated traders.

Disclosure: Ben Kramer-Miller has no position in Krispy Kreme or in any of the stocks mentioned in this article.