U.S. Budget Deficit Shrinks as the Fiscal Debate Rages On

Rewind the clock about two weeks and the U.S. economic and fiscal situation looked a lot different. Private employers have created nearly 7.5 million jobs over the past three years, business activity indexes showed modest but persistent growth, and the housing market seemed to be recovering inexorably, lifting up every part of the economy it touched.

The U.S. Federal Reserve did decide that it was not yet appropriate to taper asset purchases, which was a mixed blessing, but the minutes for the last Federal Open Market Committee meeting reveal that Fed economists believe the economy to be improving at a moderate rate with a generally positive outlook. Barring catastrophic fiscal headwinds, the U.S. economy seemed like it would continue to meander its way through a humble recovery.

Snap back to the present and the U.S. is stumbling its way through the very type of fiscal snafu that economists theorized could be a big enough shock to destabilize the recovery: a partial government shutdown and the risk of default.

To date, the developing budget impasse has been bad but not catastrophic, and for the first time since the standoff began the ball appears to be rolling forward. House Republicans have announced their willingness to pass a clean, short-term debt ceiling deal in return for a firm commitment from President Barack Obama and congressional Democrats to discuss substantive changes to the Affordable Care Act and the nation’s ongoing spending problem.

The U.S. Treasury, which has been very vocal about the negative impact of a possible (let alone actual) default, released the monthly Treasury statement for August, revealing a snapshot of the current state of the U.S. fiscal house.

In August, Uncle Sam continued to spend more money than he made — but fortunately, the rate of growth of the government’s deficit has slowed. The Treasury reported total receipts of $185 billion for August and total outlays of $333 billion, yielding a deficit of $148 billion. 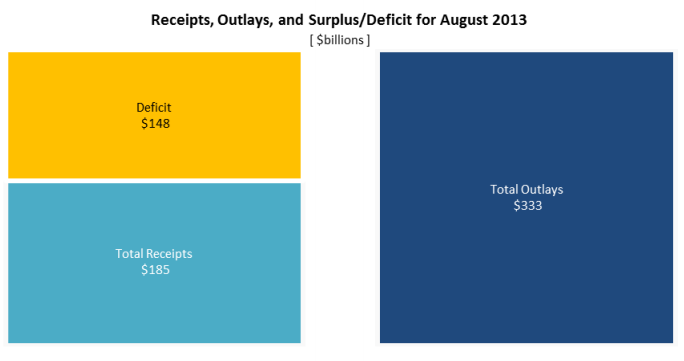 Speaking to Congress on Thursday morning, Treasury Secretary Jack Lew argued that no matter what, Congress must act to increase the government’s borrowing authority. America’s deficits are shrinking, but we are by no means close to running a surplus. This means that without the capacity to borrow, the country will fail to pay all of its bills.