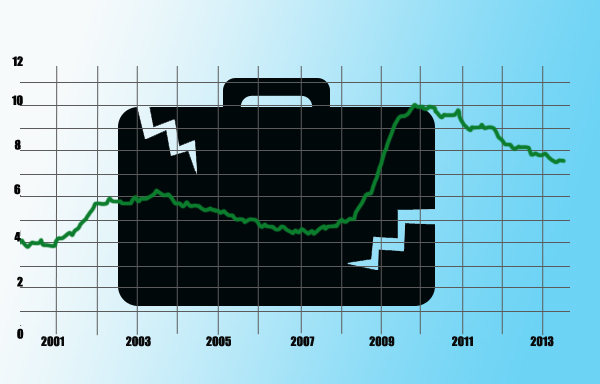 America’s job market has been seen as resilient so far this year, adding jobs despite January’s tax increases and March’s federal spending cuts, two events that appeared to weigh down economic growth in the first six months of 2013. Overall, the U.S. economy lost 8.7 million jobs during the financial crisis, but private payrolls have grown for the past 40 months by an average of 165,000 jobs.

Throughout the first six months of the year, employers have been laying off fewer workers, and the number of unemployed Americans has settled at 11.8 million, or 7.6 percent, down from its peak of 10.1 percent in October 2009. The unemployment level still remains stubbornly high, and while the job market has been resilient, it has only moved forward in small bursts.

The elephant in the room during a typical diagnosis of the U.S. economy is the labor market. Initial claims for unemployment benefits, which act as a proxy for layoffs, are a good measure of the health of the economy. In the week ended July 20, 343,000 Americans filed initial claims for unemployment benefits, an increase of 7,000 from the previous week’s revised figure of 336,000, reported the Department of Labor Thursday. Economists polled by Dow Jones Newswires had expected a smaller jump, with predictions set at 340,000 new claims.

Over the past nine months, the economy has added slightly more than 200,000 jobs per month. Recent readings of the health of the U.S. labor market have revealed signs of strength; the Labor Department said earlier this month that 195,000 jobs were added in June, Challenger’s job cuts report showed employers announced 258,932 job cuts from January through June, the second lowest six-month total since 2000, and Gallup’s U.S. Job Creation Index found that the positive sentiment of U.S. workers hit a five-year high in June.

While jobless claims provide the first look at the employment situation for any given month, the weekly figures can be volatile, so economists use the four-week moving average to understand wider trends. Last week, that figure dropped, falling to 345,250 last week from 345,250, even though initial jobless claims rose.

“The labor market conditions are improving modestly,” BNP Paribas economist Yelena Shulyatyeva told Bloomberg. “We are seeing a big disconnect between growth in the labor market and the economy overall. The economy is slowing down while the labor market is holding up.” But the better-than-expected increase in orders for durable goods, announced by the Department of Commerce Thursday, suggest that manufacturing will pick up in the second half of the year and help out the economy.

Central bank Chairman Ben Bernanke’s vision of the current economic condition in the United States may best be described as cautiously optimistic. “The economic recovery has continued at a moderate pace in recent quarters,” he said at his testimony before the House of Representatives last Wednesday, “despite the strong headwinds created by federal fiscal policy.”

Continued job growth at the current rate could prompt the Federal Reserve to begin tapering its $85-billion-a-month in bond purchases. Bernanke already said earlier this year that the bank plans to begin reducing the stimulus by the year’s end, and stop the program by the middle of 2014 if the economy meets the Fed’s targets.

The Labor Department’s report also showed that the number of people filing for their second week or more of unemployment benefits dropped by 119,000 to 2,997,000 in the week ended July 13. Continuing claims are reported with a one-week lag.