Unlike McDonald’s, These Companies Are Proving Higher Wages Pay Off

The fast food industry is notorious for low pay, but a number of fast food companies such as Shake Shack, Noodles & Co, In-N-Out, and Michigan’s Moo Chuck Moo are proving that doesn’t always have to be the case. Shake Shake is a burger chain with locations all along the East Coast, as well as international locations in the Middle East, Russia, Turkey, and the United Kingdom, and its CEO Randy Garutti recently told Think Progress that it pays starting workers $9.50 an hour outside of New York City and $10 an hour for New Yorkers. It also offers full-time employees health, dental, vision, retirement, and disability benefits — plus paid time off.

That’s a far cry from McDonald’s (NYSE:MCD) current minimum wages, a reality that has drawn significant criticism for the chain and resulted in a number of protests, and Garutti maintains that a number of benefits come from paying workers the higher wage and offering them benefits. He explained via Think Progress last week, “Our turnover is lower, we can hire the best, they stay longer, and we can grow them into management.” He also added that customers notice the difference: “If the team feels taken care of, then they’ll go out and take care of the guests.”

Shack Shake executives and Garutti stand by their assertion that paying workers a higher wage actually pays off for the chain in the long run because it results in better customer service, along with a desire shared among workers to move up the ladder and eventually obtain management roles. The owners of Shake Shack originally started in fine dining, only to bring the compensation practices from those restaurants to the fast food stand. According to Think Progress, even though Shake Shack employees either start out making $9.50 or $10 an hour based on their location, on average, workers get $10.70 an hour on account of a program called Shack Bucks, which gives employees a percentage of the company’s top-line sales every month. In addition, the company pays about 70 percent of employees’ health care premiums and also matches contributions to their 401(k)s.

The success Shake Shack has had with its higher wages is likely to be frustrating to disgruntled McDonald’s workers who see how the different wage structures can pay off. Currently paid between $7 and $8 an hour, McDonald’s workers have long protested for a “livable” minimum wage, with the target being around $15 an hour, but the chain’s executives have yet to respond to any requests, and thus, the struggle wears on. 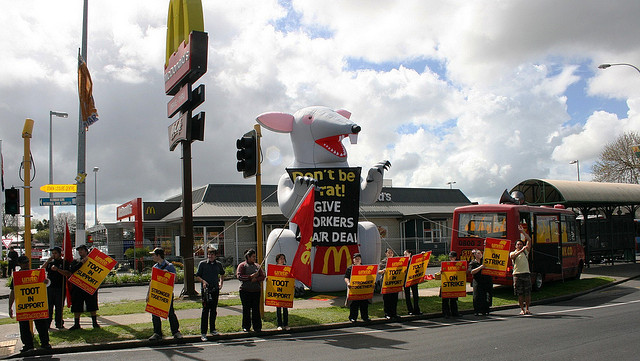 And Shake Shack isn’t even the only fast food company that pays its workers much higher wages than McDonald’s does. Think Progress reported last week that Michigan’s Moo Cluck Moo pays entry-level workers $15 an hour, and In-N-Out, a West Coast burger chain, pays $10.50 an hour for entry-level employees. Outside of the burger sphere, we learned last week that Noodles & Company mostly pays its workers above minimum wage, so much so that potential hikes in the minimum wage rate isn’t expected to affect the business too much, and Boston-based burrito chain Boloco also pays its workers anywhere from $9 to $11 an hour.

So, as it turns out, to be successful in the fast food world, a company doesn’t have to pay its employees only meager wages, and ones that will result in a significant amount of employee dissatisfaction and revolt. McDonald’s CEO Don Thompson has been conspicuously defensive about the rates he currently pays his workers, but still, maybe he should take a nod from Shake Shack, Noodles, Boloco, and In-N-Out, and see that paying workers higher wages can yield higher profits in the long run.