It was another volatile week for the U.S. stock market as the Dow Jones Industrial Average (NYSERCA:DIA) added 167 points on Friday to close at 15,761 while the S&P 500 (NYSEARCA:SPY) gained 0.5 percent for the week to close just below record highs. The Nasdaq Composite (NYSEARCA:QQQ) slid 0.1 percent week over week while the Russell 2000 (NYSEARCA:IWM) index of small cap stocks added 0.4 percent on the week.

The Dow and other major U.S. stock indexes continue to levitate higher in spite of increasing volatility and a sharp sell off on Thursday. The market is becoming rather bi-polar as Friday’s jobs report came in much stronger than expected while consumer sentiment fell to a two-year low and broadly missed expectations. 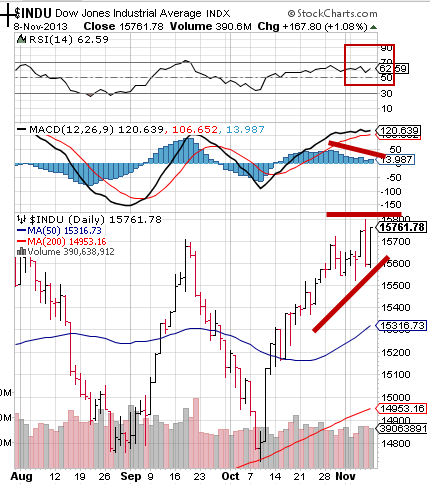 The volatile and confused action can be seen in the chart of the Dow as it took a big sell off on Thursday, followed by a huge rally on Friday but still remains below recent highs. RSI indicates that the average is near overbought levels while momentum as represented by MACD shows a negative divergence as MACD declines but prices continue to rise.

Many other cautionary indications continue to litter the landscape:

1. Major financial figures, including most recently, Laurence Fink, CEO of Blackrock, have expressed concerns that the market is becoming “bubble-like” or “frothy” and that the Federal Reserve needs to curtail its asset buying program to avoid a dangerous asset bubble.

According to Investors Intelligence, as of October 29, 52.6 percent of the surveyed investors were bullish and only 16.5 percent were bearish, resulting in a bull/bear ratio of 3.19. The bull/bear ratio has not been above 3 since 2011.

Is the fact that stock market bears have become an endangered species a contrarian indicator? Many commentators believe so, comparing the situation to the “magazine cover indicator,” which is based on the notion that by the time a major business magazine focuses on a stock market rally – it is usually too late.

Bulls outnumber bears by a large percentage and the last time levels like this were reached the S&P 500 fell nearly 10 percent between April and June, 2012.

4. The ongoing flood of money from retail investors coming into the market, at the highest levels since 2000, and insiders selling at elevated levels are both notorious indicators of impending market tops.

The big news on Friday was the monthly unemployment report which indicated that the economy had added 204,000 jobs in October, soundly beating analysts’ expectations. However, the overall unemployment rate ticked higher from 7.2 percent to 7.3 percent as people continued leaving the job market.

Market participants couldn’t seem to decide if good news was good or if good news was bad as futures and major indexes swung lower in early action but then kicked into gear to close solidly higher as the rally gained strength during the day.

People are still trying to figure out if the Fed might taper its bond buying program in December or wait until March, and Friday’s mixed bag of reports didn’t do anything to help clear up the picture. Even the Fed described the picture as muddled as Atlanta Fed President Dennis Lockhart called the current economic environment “murkier than I would like.”

In China, stocks continued to decline as investors remained anxious about the economic policy meeting scheduled for November 9-12 in Beijing. The fear factor outweighed a surprising report from the General Administration of Customs that China’s exports increased by 5.6 percent in October on a year-over-year basis, beating economists’ expectations for a 1.7 percent rise. The Shanghai Composite Index sank 1.09 percent to 2,106 (NYSEARCA:FXI). Hong Kong’s Hang Seng Index dropped 0.60 percent to end the day at 22,744 (NYSEARCA:EWH).

At home, bond yields jumped with the ten year Treasury (NYSEARCA:IEF) jumping to 2.75 percent from Thursday’s close of 2.61 percent.

Bottom line: Investors continue to buy the dip and remain complacent, even euphoric, while risk and market extremes reach historic levels and noted experts sound dire warnings. The game will continue until it ends which could be sooner than most people expect. Wall Street Sector Selector remains in “yellow flag” mode, expecting a trend change ahead.