This is Why Wages Haven’t Increased in 50 Years

Most experts will agree the economy has improved dramatically from its pale, feeble days during and directly after the Great Recession. Unemployment is down (even if there are a few caveats), low interest rates make it easier to make big purchases, and the stock market has largely recovered, except for a few bumps along the way. So why aren’t people rejoicing? The answer is simple: Their wages aren’t growing enough to afford the post-recession celebration.

In fact, several analyses show that “real wages” — the ones that adjust income and buying power with inflation over time — haven’t grown in decades. One chart from the Pew Research Center shown below illustrates that wages have barely budged in 50 years, growing just over a dollar in purchasing power since 1964. The average hourly wage in the United States in 2014 was $20.67. When you take inflation into account, that buys roughly the same amount of stuff that the average wage of $2.50 did in 1964, give or take a few cents. 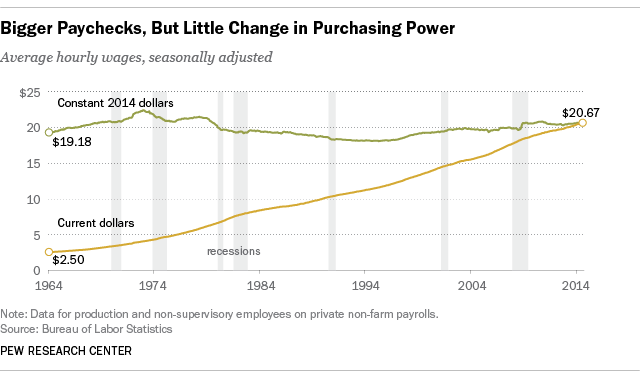 Wages haven’t grown much in the past 50 years | Source: Pew Research Center

Our economy doesn’t exist in a vacuum, and neither do wages. They’re impacted by a number of complex factors, which is why the President has more than 30 economic experts advising him at any given time. However, to simplify things we’ve taken a look at some of the biggest items to influence wages in the last several years, and why people haven’t experienced the bump in their paychecks they really need — even if they’re getting an annual raise. (And that’s not even a guarantee anymore.)

Pew, along with U.S. News & World Report and other sources, point to 1979 as the year when purchasing power was roughly the same as it is today. For that reason, you’ll find many models that compare today’s wages with that year.

For example, you’ll find that when we talk about wage stagnation, we’re really only talking about low- and middle-income earners in the United States. The chart above from the left-leaning Economic Policy Institute (EPI) shows why — middle-wage earners saw their incomes rise just 6% over the last 35 years, while the lowest wage earners lost about 5% of their wages. In that same time period, the top earners in the country experienced a wage growth of 41%. The growth of middle-income earners was only because of a boost around 1999 — wages were stagnant for 20 years before that, and another 10-plus years following it.

People can point to a number of reasons why wages haven’t grown in a real, useable sense in years. Some of it has to do with economic policy, and some of it happens organically when recessions hit — wages grow and shrink just like any other economic indicator. However, there are some more obvious factors that have hit wages particularly hard, causing most people to see little increase in their spending power over time. Here are a few of them.

The cost of benefits has skyrocketed

Wages and salaries might make up about 70% of how employees are compensated, but those aren’t the only costs of employment that companies need to balance. Unfortunately, the rising costs of the other 30% is contributing to wage suppression. Health care, one of the most obvious and costly forms of employee benefits, have notoriously skyrocketed, completely out of the control of workers themselves.

Overall, the cost of benefits to employers has risen roughly 284% from 1982 until the end of 2015, according to data from the Bureau of Labor Statistics. (We averaged the employment cost index for benefits from each year, then calculated the percent change over time.) With those kinds of increases, it’s not a huge leap to conclude that executives have balanced their books by compensating the larger benefits costs with stagnated wages — even if the benefits don’t change much on the surface.

Globalization and technology have a significant role

Both globalization and technology advances have made it easier to businesses to accomplish their goals for less money. However, that also means that other companies can get in on the action — and drive up competition. To keep costs low and stay competitive, many businesses are stagnating wages to meet their bottom line objectives, U.S. News & World Report argues. “The intensification of competition makes it very hard to simply pass along the increased costs,” Robert Shapiro, an economist with the Brookings Institution, told U.S. News. Somebody’s got to lose money in the business equation, and in many cases it’s employees.

CEOs are taking a larger cut

As we’ve written about before, CEO pay has skyrocketed in the past several decades, a trend that helps the people who are taking the most risks and (presumably) doing the most work. However, this leaves much, much less money in the company coffers to boost wages for the majority of employees.

The one bright spot with wages in America

It’s easy to become Eeyore-like about wage stagnation in this country, especially since we haven’t seen any increases to speak of in the past several decades, but particularly since the recession. However, there is a small shard of a silver lining in all of this: After years of post-recession stalling, wages are starting to go up in larger increments.

The June 2016 jobs report from the Bureau of Labor Statistics shows that jobs are hiring hundreds of thousands of new employees. But more relevant to this topic is that wages have also increased to an average of $25.61 per hour in June 2016, representing a 2.6% increase compared to the previous year. Is that anything to go crazy about? Maybe not. The EPI recommends that year-over-year wage increases need to get into the 3.5% or 4% range for workers to really experience any positive effects on their livelihoods.

Wage growth is at 2.6% in June 2016, the highest in almost 7 years | Source: Economic Policy Institute

However, the organization also put together a chart showing there is reason to be cautiously optimistic. The 2.6% year-over-year increase in wages is the highest level we’ve seen in almost seven years, since 2009 around the time the recession ended. That’s not large, considering that most year-over-year increases in decades past were around 4% in the years right before the Great Recession, and in the 8-9% range during the height of inflation in the 1970s and 1980s. However, if the upward trend continues, and the labor market remains tight (with unemployment low), we might start to see some changes in a positive direction. For the sake of our paychecks, let’s hope so.