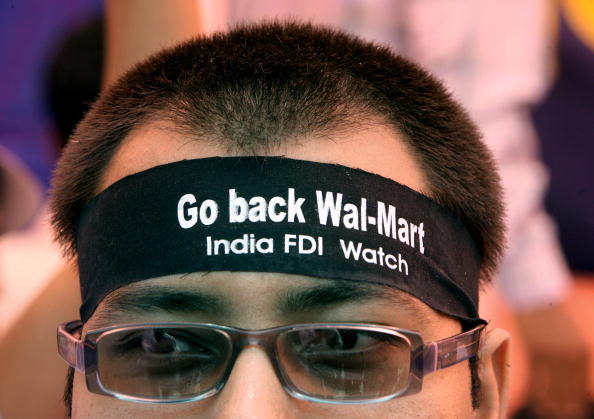 Wal-Mart is by no means universally loved, and it’s becoming quite clear that it faces a lot of the same PR trouble abroad as it does in the States. The company’s most recent problems are in India, where large numbers of protesters have carried out demonstrations at Wal-Mart offices in Gurgaon, India. Located a short distance from New Delhi, the Indian capital, the demonstrators want the company to keep clear of traditional and long-standing markets, where vendors fear for their livelihoods.

“Our main concern with Wal-Mart and really any of the malls here is that many of them are selling fresh produce, and fish and meat,” Geetanjali Arora of the National Hawker Federation, and one of the protest’s leaders, told NPR. “That’s really affecting people who earn a daily living selling this.”

Wal-Mart first moved into India five years ago and currently has 20 operating stores there. The protests were sparked by the announcement that 50 more would soon be opened, and that has many people worried that they will be run out of business. The company has had a tough go so far in the Indian market, where it has opened a series of wholesale retail stores in a partnership with Bharti Enterprises.

Bloomberg reports that the partnership dissolved in 2013, and Wal-Mart took sole control of their operations in the world’s second most populous country. The company is dead set on giving it another go, however, despite the fact that there are some rather stringent regulations regarding foreign investment.

Now, with full control of the 20 established stores and 50 more planned, Wal-Mart is set to make some big moves to try and win over the Indian populace. The stores in India are not like they are in America, but instead function more like a Sam’s Club or Costco. They are for members only, and members are required to be business owners.

The cultural difference is really the biggest hurdle Wal-Mart has to overtake in order to find firm footing in India. Small business, including mom-and-pop shops and independent vendors, are critically important to the Indian economy, and Wal-Mart has mostly been trying to swing a customer base away from those suppliers and toward its own stores. This is the genesis of the protests, as many of these vendors and small businesses feel that they will be effectively run out of business if Wal-Mart continues to expand.

So far, the company hasn’t had a large amount of success. But by nearly tripling its locations, it may be able to swing some more business into its doors. And Wal-Mart isn’t the only company that’s proving to be a threat to India’s vendors and small businesses. Many consumers have started going to shopping malls and grocery stores in lieu of visiting the traditional markets, adding to the desperation of the protesters.

“It’s every mother and father’s duty to help their kids land well,” said Sudha, a purse vendor in West Delhi who spoke to NPR. “I want my son and daughter to get good training for good jobs. But we can do that only if we have some money to spare. If foreign companies stamp on our businesses, where will we go?”

In order to preserve the traditional markets and the vendors and small businesses they support, the protestors are simply asking that Wal-Mart build its stores in other areas, away from where they make a living. “We don’t have any other demands,” Ashok Kumar Sahni, a food and beverage vendor, told NPR. “Please don’t let it affect our livelihoods. That’s all,” he added, speaking about Wal-Mart’s business plans.

Indians are starting to recognize one of the major issues that Wal-Mart has been criticized for even, in America: Destroying small businesses with its sheer size and pricing strategy. If this were taking place in the United States, the protesters’ cries would likely be met with indifference. But the Indians have a much different culture, and it appears that the markets and vendor classes are vitally important. Will the protests have any effect on Wal-Mart’s plans? It’s doubtful, but you can’t blame them for trying.