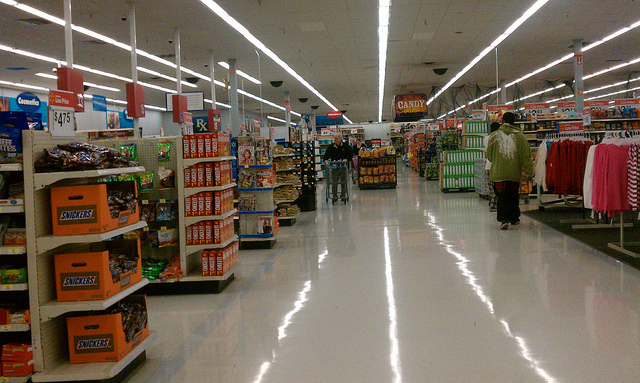 After being lambasted by the media and consumers for allowing shelves to remain empty, Wal-Mart (NYSE:WMT) has gotten its independent auditors back on the job. The company responsible for keeping tabs on store practices has instituted a strategy of tagging all essentials with green dot stickers so managers know what merchandise should remain in stock.

When it comes to the nation’s largest retailer, there are few secrets. Bloomberg pointed out the emptying shelves — presenting a decaying, mismanaged picture to customers and employees alike — in a series of reports earlier this year. Wal-Mart management got the memo and heard the complaints of customers everywhere. When the news emerged of a 1.4 percent decline in sales in this year’s first quarter, Wal-Mart executives decided to get the inventory back on the shelves by any means necessary.One of their steps was to propose a new plan, tying executive compensation to keeping the stocks shelved. This proposal is going to be voted on in early June at the company’s annual meeting.

That has brought out the green dot brigade. Acosta, which used to perform secret audits at Wal-Mart stores nationwide, had been given a break from its duties before the outrage over empty shelves surfaced. Wal-Mart has been expanding its operations, adding stores and warehouses, while cutting back on staff. Hence the stocking problem and the movement of customers to competitors like Target (NYSE:TGT). Acosta is now back on the job and is sticking green dots next to any item management considers essential. This strategy is a departure from the blind audits of the past.

In the old Acosta system, stores would never know what was coming and would be judged accordingly. The secrecy was intense and auditors were reminded to report any managers who tried to get wind of the merchandise under scrutiny. Business Week reports that the green-dot solution is now fully disclosed to management. In what might be a sign of desperation, Wal-Mart executives just want best-selling items on the shelves.

Will that solve the problem created by having more work than employees can handle? Wallace Hopp, associate dean at the University of Michigan School of Business, told Business Week it’s a “short-sighted” system that ignores the larger problem of “having stuff in stock in the whole store.”

In other words, if everyone is worrying about stocking one particular brand of every merchandise category, Wal-Mart will still lose the customers looking for the brand that is missing on the empty shelf next to it. As for hiring more employees to stock the shelves, that solution doesn’t appear to be on the table. Ironically, the number of employees Wal-Mart has let go in the past five years — 1.4 percent of its workforce — precisely matched the percentage (1.4) of Wal-Mart’s decline in sales for the first quarter.