The markets closed lower in Asia on Wednesday. The Nikkei fell 0.61 percent, while the yen strengthened slightly to trade at 95.7185 to the dollar. Like yesterday, observers suggest that investors are keen to take profits after last week’s record highs. The Hang Seng index fell 1.46 percent, while the S&P/ASX 200 was off 0.50 percent.

The markets were also lower in Europe following reports that industrial production across the region declined 0.4 percent in January, which compares to a 0.9 percent increase in December. As New York headed toward its opening bell, Germany’s DAX was off 0.12 percent, London’s FTSE 100 was off 0.84 percent, and the STOXX 50 index was off 0.55 percent. 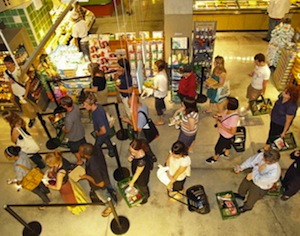 Overall, the news is optimistic. Consumer spending, which accounts for as much as 75 percent of GDP, was expected to slow down as a result of the payroll tax increase. However, February’s retail report and other indicators suggest that this is not necessarily the case.