Why Weight Watchers is Losing So Much Money for Investors

Oprah is Midas no more. The TV and lifestyle guru followed by scores of people has built a successful empire over several decades, but even the touch of gold can’t solve every problem. Those same devotees apparently aren’t following her to the scales — or at least not to the products and support groups that promise to help them shed the extra pounds. Weight Watchers is floundering, losing cash instead of gaining subscribers who are hoping to slim down.

In late 2015, Oprah Winfrey announced she would be purchasing a 10% stake in the company that became famous for its points system of essentially counting calories. That buy-in netted her a board position as well, and the stock prices for shares of the company surged. From October to November 2015 after the announcement, shares of the company grew from $5.98 a share to a high of $26.61 — an increase of 345% in just a month and a half.

However, Oprah’s golden touch didn’t last long. By early 2016 the company was losing money for investors in big ways. By mid-September 2016, the stock price is just $10.12. Granted, it’s still an increase compared to where it was before Oprah came on board. But the prognosis isn’t good, especially since Weight Watchers CEO Jim Chambers resigned at the beginning of September. However, the failure can’t be placed at Oprah’s feet alone. The TV magnate is known for putting books on bestseller lists and holiday giveaways, but might not be able to save a failing company. To be fair, the company’s issues might be bigger than any celebrity partnership could solve.

Weight Watchers: Struggling to keep up with the competition 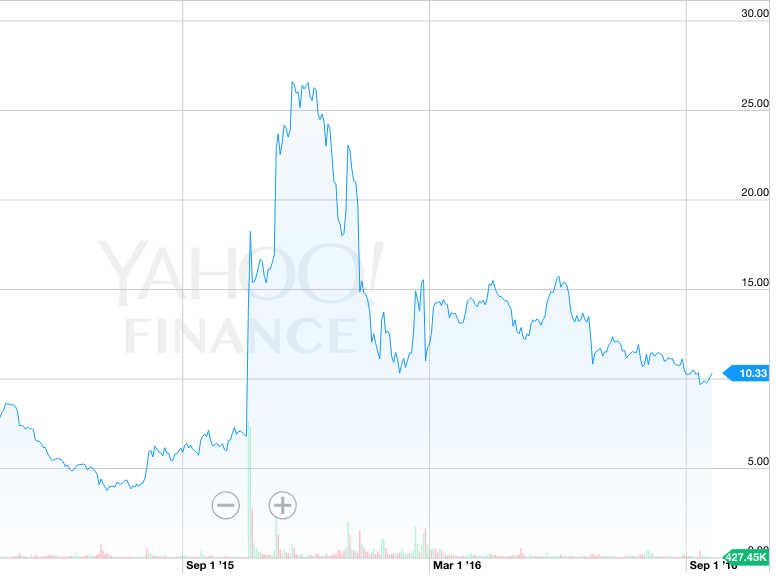 Critics say one of the biggest reasons why Weight Watchers is hurting is because it simply can’t compete like it once did. The program is arguably still a titan in the $60 billion weight loss industry, but it’s losing influence quickly. Competitors like Nutrisystem continue to grow in popularity, drawing customers away despite its high cost. The proof is in the company’s health: Nutrisystem stock prices are at more than $29 a share, and have been growing steadily over the past year.

On the other side of the cost spectrum, there are hundreds of low-cost or even free apps that can help you to monitor your calories, track your weight, or get extra support with your fitness goals. No matter your preferences, there’s probably an app for it. Weight Watchers has its own app and check-in options online, but it wasn’t ahead of the curve fast enough to ward off the other free offerings. Who wants to pay for an app when there’s an equally good option that’s free?

In addition to the onslaught of free resources, many people’s attitudes about health are also changing. For the most part, people tend to forgo calorie counting in favor of a program that’s more lifestyle-based, like the Paleo diet, Business Insider reports. It’s not just about the number on the scale anymore: It’s about nutrition and feeling better, not just fitting into your dream pair of jeans.

Weight Watchers has evolved over the years. It’s not using the same points system it originally started with, but that doesn’t mean it’s caught up with the trends in fitness now. Kevin Geary, founder of fitness-forward Rebooted Body, explained in a blog post why the diet program isn’t effective long term. “Weight Watchers knows that by restricting how much you eat you’re going to lose weight and see some semblance of success,” Geary began. “They also know that they’re setting you up for further disordered eating (usually emotional eating binges — driven by the psychological impact of restriction).” In other words, the program itself ends up promoting yo-yo dieting — whether it’s intentional or not.

The problem of Oprah and the yo-yo diet

By now, we know that yo-yo dieting is a problem, and overall isn’t healthy. What’s more, it’s a signifier of failure to reach our goals, or at least keep them intact. Losing weight only to gain it back again isn’t ideal, but it’s what keeps people enrolled in diet programs like Weight Watchers.

Oprah had undeniable marketing powers, but even that might not be enough, some analysts said when she first bought stock in the company. “Regardless of how much Ms. Winfrey contributes to the marketing of Weight Watchers, a well-designed new program is necessary for the company’s success,” Barclays analyst Meredith Adler wrote in a note to clients. Almost a year after Oprah’s involvement, we’re seeing the wheels continue to come loose.

And that may be the biggest problem of all. Oprah’s own struggles with weight loss and gain have been well documented over the years. It makes her genuine and relatable, but it automatically equates the yo-yo tendency to the brand even more. “Tapping into that idea and then leaving your customers unhappy … is exactly why that business is not surviving. If you’re going to tap into those insecurities of the yo yo dieter, that business is not going to be around for long because fundamentally, today people who make sacrifices want to see result,” University of Southern California marketing professor Jeetendr Sehdev told Business Insider.

Essentially, the model betrays ultimate success, which in turn becomes unattractive for potential members. Midas on your side or not, that’s quite the hurdle to overcome.