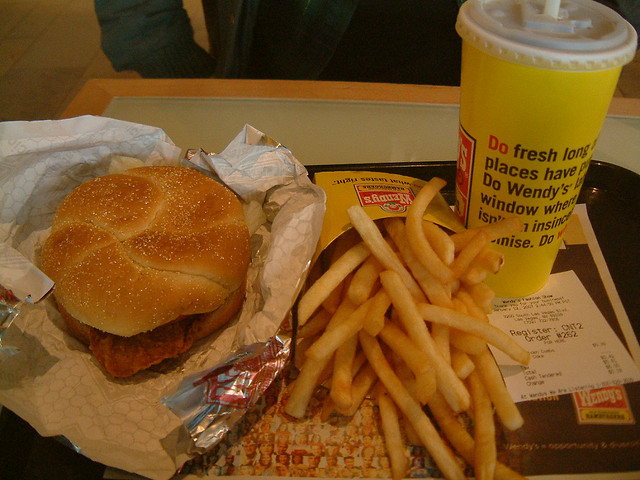 If the rising popularity of fast food chains like Chipotle (NYSE:CMG) has taught us anything, it’s that consumers like when restaurants can share some of their heat from the kitchen. According to a Zacks analyst note via Nasdaq.com, the research firm Technomic reported in its 2013 Flavor Consumer Trend Report that nearly 54 percent of domestic consumers like spicy sauces more than the less spicy products. That trend is demonstrated in some of the recent spicy success enjoyed by a handful of struggling fast food companies.

Wendy’s Co. (NYSE:WEN) is one such hamburger giant that has gained traction this year, thanks in part to two spicy food items on its Right Price, Right Size menu. These two limited-time products — the Spicy Chipotle Crispy Chicken Sandwich and Spicy Chipotle Jr. Cheeseburger — are priced at only 99 cents, and they are now enjoying significant attention from consumers.

Wendy’s two sandwiches, made either with beef or a crispy chicken filet topped with cheese, jalapeños, and a spicy sauce, can be found at most Wendy’s locations in the U.S., and they fall alongside other popular options on Wendy’s value menu that is now similar to McDonald’s (NYSE:MCD) new dollar menu. The Right Price, Right Size Menu offers five types of cheeseburgers, three varieties of chicken wraps, and other offerings in the price range of 99 cents to $1.99.

According to Zacks, Wendy’s two new spicy sandwiches are part of the chain’s initiative to to expand and rejuvenate itself. Like its rivals, the Dublin, Ohio-based company has been struggling to stay competitive at a time when quick-service hamburger restaurateurs are not thriving as much as they once did. The chain is working on reshaping its menu to help drive consumer traffic and remind customers why they initially enjoyed Wendy’s fare so much in the first place.

Zacks analysts maintained confidence in their note on Thursday, saying, “We remain confident on the company’s solid menu pipeline and marketing initiatives planned for the period ahead.”

Wendy’s two sandwiches are only limited-time offerings and thus won’t be around forever, but if the new items prove to pull in significant enough sales, it is possible that they’ll find a permanent place on the chain’s menu.

Wendy’s isn’t the only fast food company that has recently gone the spicy route — McDonald’s also tried to bring the heat this fall with its Mighty Wings, and Jack in the Box (NASDAQ:JACK) recently introduced two spicy burgers, but McDonald’s experience proved a little more rocky than Wendy’s. The world’s largest burger chain was left with 50 million pounds of wings following its fall promotion, and franchisees complained that the wings were priced too high and were too spicy.

Nonetheless, like Wendy’s, Jack in the Box wasn’t dissuaded by McDonald’s failed efforts, and the San Diego, California-based restaurant recently launched the Fajita Ranch Melt and Jalapeño BBQ Burger. The chain hopes to realize the same success that Wendy’s has enjoyed with its sandwiches — let’s just hope consumers don’t lose their taste for spice.