We’re Not Getting Any Closer to Eliminating Sweatshops

In 2000, longtime human rights activists and New York Times columnists Nicholas Kristof and his wife, Sheryl WuDunn, wrote a column called “Two Cheers for Sweatshops.” The highly controversial article essentially said this: Sweatshops can be deplorable, but boycotting the products made there ends up hurting the workers more. They might work long hours and face emotional and physical abuses, but not buying those products means those people — often women — won’t have a job at all.

Needless to say, the writing was inflammatory. No one wants to think about how their sports jersey or polo shirt or pair of jeans likely originated from a steamy firetrap of a factory in southern Asia. But when faced with the problem, the answer is to say, “cheers?” Unlikely. But the argument illuminates part of why eliminating the harsh conditions is so difficult. Holding brands accountable for where their products are made is a huge step, and an important one. According to Human Rights Watch and other groups, solving the systemic issues often lie at the feet of government, making it perhaps the most frustrating aspect of all.

The number of atrocities documented in countries where sweatshops abound are still piling up, and yet the horrors continue. The largest disaster in recent memory happened in Bangladesh in the spring of 2013, when an eight-story building outside the capital city of Dhaka collapsed, killing 1,100 people who worked in several of the garment factories within the building.

Despite an initial outcry and many international retailers forming alliances to call for better worker safety within Bangladesh and other countries, there’s very little evidence of changing practices. In some countries (Bangladesh included) workers have secured the right to form unions and have secured higher wages through protests. Some new safety measures have been put into place. “But we’d be foolish to believe that the industry has thoroughly cleaned up its act,” Jason Motlagh wrote in a column for The Washington Post, “or that it will continue to try to as Western concern flags.” Motlagh, a columnist for the Post, was encouraged to see some progress following the April 2013 Bangladeshi disaster, but warned that reforms wouldn’t reach appropriate standards as long as American companies and others like them continued to send large-scale production orders overseas while also demanding the lowest possible prices.

Motlagh’s words continue to ring true, as in January 2015, another 13 people were killed in a factory fire, located again in Dhaka. A recent report from Human Rights Watch shows that the problem is more than just one city or country, and highlights countless abuses of worker safety and pay in 73 factories in and around Phnom Penh, Cambodia’s capital city. Dosomething.org, the website that encourages civic action and social change, gives several facts about sweatshops and points people toward ways to get involved. Before signing on to a campaign, it’s important to understand what’s actually going on, and how pervasive the problem is.

The United States has a few working definitions of what a sweatshop is, but the U.S. General Accounting Office defined it in 1988 as “a business that regularly violates both wage or child labor and safety or health laws.” By this standard, nearly all of the factories described in the Human Rights Watch March 2015 report easily fall into this category. It’s important to note that the Cambodian government rejected the report and disputes its findings.

“Currently, Cambodia has been closely cooperating with the International Labor Organization’s Better Factories Cambodia to inspect and assess labor conditions in addition to the ministry’s existing inspection mechanism on labor conditions, safety and hygiene,” said the statement, given by the country’s Ministry of Labor office.

The report changes the names of the women it spoke with, but if true, details an ongoing problem of deplorable working conditions. One woman told Human Rights Watch staffers that she was demoted with a cut in pay when it became obvious that she was pregnant, and then fired after protesting through her union. “It doesn’t matter whether you are pregnant or not — whether you are sick or not — you have to sit and work,” another worker said. “If you take a break, the work piles up on the machine and the supervisor will come and shout. And if [a pregnant] worker is seen as working ‘slowly’ then her contract will not be renewed.” 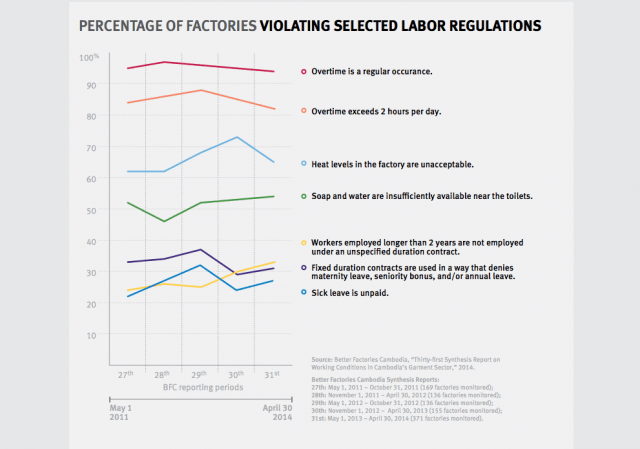 What’s more, few of these instances are being brought to light in the country’s third-party inspection system. The Cambodian government works with Better Factories Cambodia, along with the International Labour Organization, to conduct factory inspections and ensure workers have safe conditions. Better Factories Cambodia began in 2001, but despite an extensive history, only imposed 10 fines on factories between January 2009 and December 2013 among the thousands of inspections it conducted. Workers told Human Rights Watch that the disconnect happens because factory managers threaten workers ahead of visits, hide underage workers, and supply employees with necessary masks and drinking water right before inspectors arrive.

Human Rights Watch acknowledges that Better Factories Cambodia “fills a critical monitoring role” within the country, and that the organization seeks to counteract these sorts of deceptions with unannounced visits and other methods. But workers told Human Rights Watch staff that they still lack a direct way to contact the BFC to file complaints, which limits the overall effectiveness.

The factories Human Rights Watch visited aren’t just supplying the low-level textile brands of the world. In its report, the group highlights several factories that manufacture clothing for H&M, Gap, and Marks and Spencer. Each of the brands had clothing produced in the factories until at least the end of 2013, when the interviews took place. The factories in question were like all of the others: They often forced overtime or threatened job loss, discriminated against pregnant workers, and were horrible at providing benefits or sick leave. 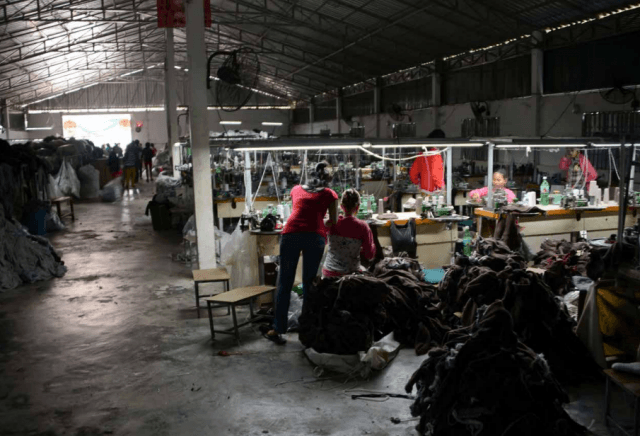 Human Rights Watch (HRW) gives several recommendations within its 140-page report about possible solutions to the problem. Some of the injustices happen as initial contracted factories for big-name brands outsource to other, often more inhumane, factories. HRW urges companies that discover this to report such actions to Better Factories Cambodia, as often the most egregious human rights violations occur when an “unofficial” factory is charged with producing a brand’s goods on a tight deadline. HRW also urges brands to disclose all of their authorized “production units,” and when those factories were last inspected.

HRW asks for Better Factories Cambodia to come up with better ways to conduct off-site worker interviews, away from eavesdropping bosses who might reciprocate with firing or other abuses in the case of a negative report. Better Factories Cambodia should also expand its Transparency Database to include the names of sourcing brands and have information readily available to workers, not just factory owners, according to HRW’s recommendations.

But the greatest responsibility for improving labor conditions lies with the Cambodian government and the Ministry of Labor and Vocational Training, HRW said. “While paying attention to individual labor rights concerns, the structural issues that underlie a range of labor rights problems – hiring practices, union-busting strategies, and unauthorized subcontracting – need urgent attention,” the report says. “The vast majority of workers are women and the issues affecting women are of particular concern.”

As mentioned before, the Cambodian government denounced the report one day after its release. In a letter to Cambodian Prime Minister Hun Sen, HRW stands by its research and said that, despite the country’s statements about improving working conditions, there is a particular need for more information about factory inspections. “We welcome more transparency around government measures to hold factories accountable,” wrote Nisha Varia, advocacy director of HRW’s women’s rights division. “We request additional information to elaborate whether these inspections refer specifically to factories in the garment sector or to factories across sectors and the actual payment of fines.”

It’s this sort of back-and-forth, often to no avail, that makes the problem of sweatshops so insidious. Blame gets bounced around like a ping pong ball, often with no definitive landing place. Government can shift focus to inspection entities, instead of addressing the problems on a national level. Factory managers know that money speaks, even to oppressed workers, and offer bribes to suppress truth when inspectors come knocking. Brands might try to hold factories accountable, but look away in the name of profits or simply get duped when their work is subcontracted to less-desirable factories. Perhaps the best stepping stone toward lasting change is supporting the work and advocacy of Human Rights Watch and other organizations like it, and pressuring our Western governments to do the same. It’s not nearly enough, but something has to change.