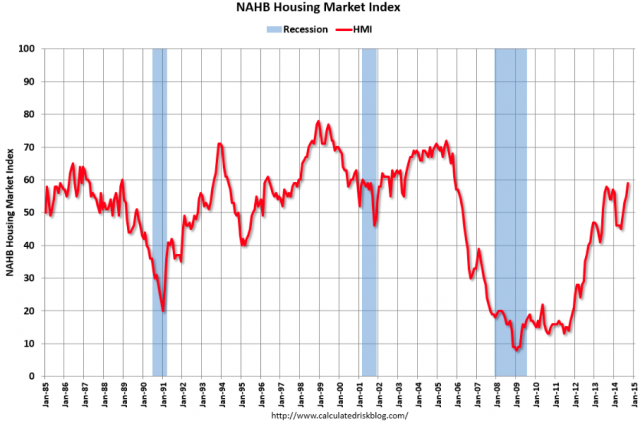 Although the real estate market is still trying to recover from its historic collapse, homebuilder sentiment in the United States rose for the fourth consecutive month and reached its highest level in almost nine years.

The National Association of HomeBuilders/Wells Fargo’s index of builder confidence increased 4 points to reach 59 in September, compared to 55 in August. After falling to as low as 45 earlier this year, builder confidence is at its highest level since November 2005 and has held above 50 for three consecutive months.

The results were better than expected. On average, economists expected the index to edge only slighter higher from last month. Any reading above 50 indicates that builders in general hold a positive view on sales conditions. In the five years before the Great Recession, the index averaged 54 and hit an all time low of 8 in early 2009. Prior to July’s reading, the index had been below 50 for five consecutive months.

“Since early summer, builders in many markets across the nation have been reporting that buyer interest and traffic have picked up, which is a positive sign that the housing market is moving in the right direction,” said NAHB Chair Kevin Kelly, a home builder and developer from Wilmington, Delaware, in a press statement.

The NAHB/Wells Fargo Housing Market Index (HMI) gauges builder perceptions in three areas of the real estate market, which all climbed higher in September for the fourth consecutive month. The reading for current sales conditions and buyer traffic both jumped 5 points to 63 and 47, respectively. The component gauging expectations for future sales rose 2 points to 67.

Adding to the positive momentum, the HMI three-month moving average improved in all four major regions of the country. The Midwest jumped 5 points to reach 59, while the South posted a 4-point gain to 56. The Northeast increased 3 points to 41, and the West gained 2 points to 58.

Lennar, one of the nation’s largest homebuilders, is also experiencing positive momentum in the housing market. Before Wednesday’s opening bell, the company reported impressive financial results. In the third-quarter, Lennar earned $177.8 million (78 cents per share), up 47 percent from $120.7 million (54 cents per share) a year earlier. Orders for new homes increased 23 percent, while the company’s backlog reached 7,290 homes, up 22 percent.