What it Takes to Develop a Financial Game

Creating a product that can be successfully sold and distributed takes hard work. No one knows this better than Samir Lyons, creator of financial board game Daytrader. At first glance, you’d never think Lyons would be likely to invent a financial board game. A computer animator by trade, Lyons has worked with animation teams for box-office hits such as Iron Man and Terminator Salvation. Soon after graduating from Savannah College of Art and Design, he moved to Los Angeles to pursue his career. However, the inventor within sprung to life one day while he was sitting at his computer.

“I was online doing some trading transactions, and then this idea hit me that trading, buying and selling stock, and investing was the perfect theme for a game. Investing is kind of a game in some ways due to the risk and reward, the thrills and the chills. I started to do some research to see what games were already out there. The ones I found were really complex, difficult to understand, and a little outdated. So I took on the challenge of creating a game about the stock market that was easy enough for a 10-year-old to understand and have a blast playing,” said Lyons.

Lyons wanted to create an engaging product but he also desired to save time and money so that he could make the most of his available resources.  Consequently, he sought advice from a trusted friend.

“I originally wanted to make it into a mobile app for phones, so I met with a friend who does strategy for large game companies. He advised me to take a step back and build a board-game format first so that I could test my idea and save time and money. I took his advice and created a board game first. It translated so well that I decided to go down that path instead of a mobile app. I went through hundreds of test plays and hundreds of revisions. It turned into a fun and engaging game,” said Lyons.

Lyons had to think of a plan for funding, manufacturing, marketing, and selling his game. Lyons overcame the funding hurdle by introducing Daytrader on Kickstarter, exceeding the fundraising goal by 4%. This exposure led to increasing interest in his product and helped propel the business further.  However, Lyons said Kickstarter did pose some challenges because he had to consistently seek help from strangers.

“I played the first iteration of Daytrader on the back of a pizza box in 2011 with my wife at our kitchen table. I put the game on Kickstarter in February of 2013. I was successfully funded and I used that money to create my first-run game. Then the game was officially launched in November 2013,” said Lyons. 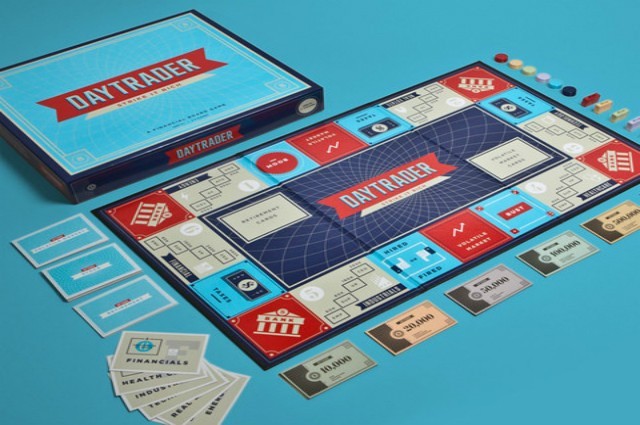 Another big break came when The Grommet contacted Lyons and offered to feature his product on their site after discovering Daytrader on Kickstarter. After some discussion, the game was introduced on the site in April.

“The Grommet is constantly trying to help us succeed and build the product. They have been extremely helpful and they’re a fantastic resource for any small business that is trying to get a start” said Lyons.

Ryan DeChance, discovery manager at The Grommet, was part of the team who discovered Daytrader on Kickstarter.  DeChance, who has personally played the game, says what attracted him to the product was that it had a new approach to financial education.

“Daytrader is different because you aren’t playing against other people; you are actually interacting with the market. The game aims to simulate the market, and as a player, I felt he had successfully done that,” said DeChance.

Lyons said his father taught him the importance of financial literacy when he was a child. His interest in finance sparked a growing passion for financial education.

“I have a background in computer animation for TV commercials and for movies. I’ve just always been interested in the world of finance. My dad didn’t work in finance, but from a very early age he made me realize the importance of having financial freedom. Very early on he would tell me about mutual funds, exchange traded funds, and IRAs.  Because my father was adamant about teaching me personal finance, I took an interest. I don’t think that’s typical. It usually takes people many years to realize the power of financial knowledge and how it can work for you.  So I’ve always been interested in personal finance,” said Lyons.

A good story is intoxicating and can make you feel a kaleidoscope of emotions. Stories also come into play when creating a relatable brand. Lyons used the storytelling skills he developed as an animation artist as a tool to breathe life into his game.

Lyons said he wanted to make sure Daytrader was not only fun but also educational. “Kids and even adults love to play games. If you can weave learning into these games, you’re going to succeed tremendously. The ability to learn when you’re playing a game is much greater. You can learn a lot faster through the gamification of a subject,” said Lyons.