What Killed Your Local, Community Bank? 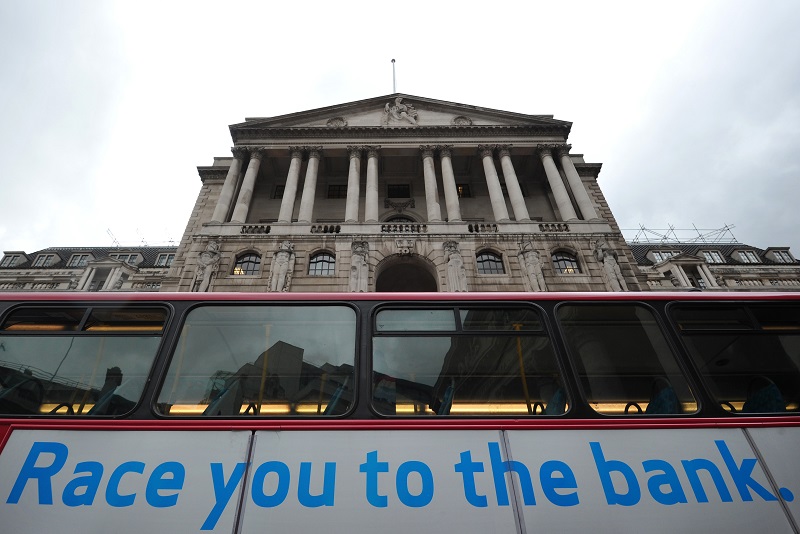 Most people like to keep their money close at hand, be it by carrying cash, burying gold in their backyards, or by simply using local, independent banking services. The world of finance is dominated by the big names – Chase, Bank of America, etc. – which come with a hearty (and deserved) side of distrust given the numerous scandals they’ve been associated with. For that reason, throngs of people have traditionally used small, community banks. Banks that keep their money in the local community, by keeping people’s savings and dolling out loans locally.

This was portrayed in the Jimmy Stewart classic It’s a Wonderful Life, in which Stewart runs a small savings and loan establishment in his hometown of Bedford Falls. Stewart’s character, George Bailey, runs Bailey Brothers’ Building and Loan, which has helped the town’s residents get financing to start businesses and buy homes – more or less how small, community banks would operate under ideal conditions.

But today, you’re more likely to find a Bank of America branch or Wells Fargo self-service ATM than an independent financial institution in small-town America. That’s because small banks are effectively being wiped out by the bigger, multinational companies that dominate the financial landscape. But there’s more at play than the simple monopolistic endgame of cutthroat capitalism – the government is to blamed as well. At least according to a 2015 study.

That study, published by Marshall Luxe and Robert Greene of the Harvard Kennedy School, says that the demise of small, community banks has been accelerated by government interference following the financial crisis and subsequent Great Recession. Specifically, the study points to the Dodd-Frank Act, which was meant put more safeguards in place to shield people from the sometimes reckless actions of large financial institutions.

“Community banks’ share of U.S. banking assets and lending markets has fallen from over 40 percent in 1994 to around 20 percent today,” the authors write. “Interestingly, we find that community banks emerged from the financial crisis with a market share 6 percent lower, but since the second quarter of 2010 – around the time of the passage of the Dodd-Frank Act – their share of U.S. commercial banking assets has declined at a rate almost double that between the second quarters of 2006 and 2010.”

The paper comes to the ultimate conclusion that community banks, which it defines as “a relatively small, standalone bank typically focused on providing basic banking activities to a local community; a ‘Main Street bank,'” are tanking due to the regulatory barriers being hoisted on the financial system – Dodd-Frank among them.

Dodd-Frank has created an environment in which consolidation is happening faster, rather than slower. Here’s a graph lifted from the study, which gives us a visual: 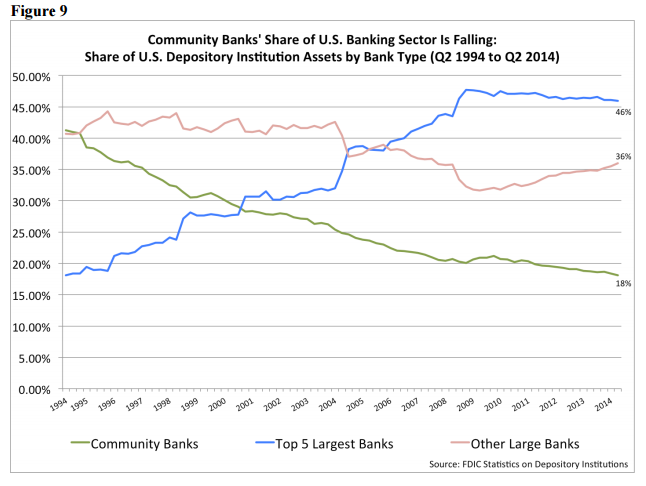 Basically, we’re left with this fairly obvious conclusion: more regulations make it harder to do business, and when it’s harder to do business, the weakest of the pack are weeded out. That’s why the bigger, stronger banks are the only ones left. Dodd-Frank, which meant to slow them down, actually did them a favor.

Through Dodd-Frank and other financial regulatory measures, the government hoped to slow the biggest banks down — to rack up an assault charge, if you will. Instead, it looks like it’s committed manslaughter.

So, if you’re one of the millions of Americans who are wondering what happened to your community bank, you’d be right to point your finger at the bigger banks gobbling everything up – but you’d have to put some blame on regulators who have made it easier for them to do so. This is also something to think about with the current arguments swirling in and around bank regulation in relation to the presidential election. There are calls to break up the big banks, not merely put more regulatory barriers up, like the resurrection of the Glass-Steagall Act.

These are complicated issues, and it’s difficult for the average American to make much sense of things like bank regulations, particularly when it’s muddled with financial jargon and legalese. But if there’s one thing to know, it’s that government intrusions into the private sector sometimes backfire, even if they initially had good intentions.

Another example of policies backfiring was the resulting rise in executive compensation – which, according to a report from NPR’s Planet Money, has its roots in a change to the tax code, as well as the public outing of CEO salaries.

Big finance may have gobbled up your community bank, but the government is apparently the one who left the door to the buffet unlocked.