What Recovery? Home Sales Plunge, Miss Expectations By a Mile 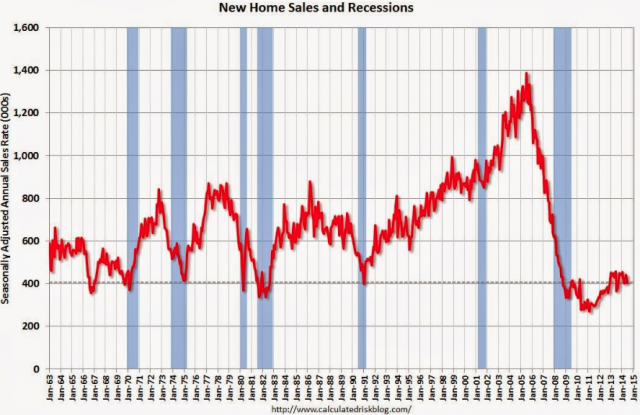 The housing market appears to be suffering from more than just cold weather. Despite a rise in temperatures across the country, new single-family home sales plunged last month and missed expectations by the widest margin in a year.

On Thursday, the U.S. Census Bureau reported that purchases of new single-family homes, measured by contracts signed, plummeted 19.4 percent to a seasonally adjusted 406,000-unit pace in June, compared to the initially reported May rate of 504,000 units. The once-impressive May rate was sharply revised lower to only 442,000 units. Sales in June were still 11.5 percent below the June 2013 estimate of 459,000 units. The median sales price of new houses sold in June 2014 was $273,500, and the average sales price was $331,400.

The results were worse than expected. New home sales have struggled to gain lasting momentum this year, but economists on average estimated a pace around 470,000 units. It was the biggest miss of expectations since last June. In comparison, new home sales reached an annual pace of 1.39 million units in July 2005.

Sales were lower across the entire country. New home sales plunged 20 percent in the Northeast from the prior month. Meanwhile, sales in the South and Midwest declined 9.5 percent and 8.2 percent, respectively. Sales in the West held up the best, but still managed to decline 1.9 percent.

Despite the dismal report, there has been some positive signs in the housing market. Earlier this week, the National Association of Realtors announced that total existing-home sales — completed transactions of single-family homes, town homes, condos, and co-ops — increased 2.6 percent to a seasonally adjusted annual rate of 5.04 million units in June compared to an upwardly revised 4.91 million units in May. It was the first time sales reached an annual pace of 5 million units since October 2013.