What Will the Ebola Scare Cost the Economy? 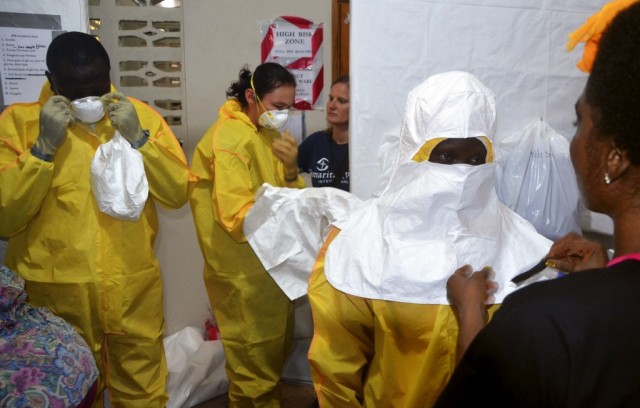 Ebola is scary, there’s no doubt about that. But is the crisis — which has so far been mostly relegated to a few countries in western Africa — being completely blown out of proportion by the media and politicians? Probably, and it’s going to cost us.

According to new figures posed by The World Bank, those costs could add up to a staggering $32.6 billion by the end of 2015. At the time of the release of The World Bank’s calculations, less than 3,500 people had died as a result of contracting the Ebola virus, with many more likely to succumb in coming weeks and months. The human toll is absolutely tragic, and definitely alarming. But the toll on the economy, particularly in western Africa, could have huge effects as well.

“With Ebola’s potential to inflict massive economic costs on Guinea, Liberia, and Sierra Leone and the rest of their neighbors in West Africa, the international community must find ways to get past logistical roadblocks and bring in more doctors and trained medical staff, more hospital beds, and more health and development support to help stop Ebola in its tracks,” said Jim Yong Kim, the President of the World Bank Group.

These projected economic costs depend mainly on the estimated trajectory the Ebola scare takes. If the outbreak is contained rather quickly, and within the main countries it has so far been relegated to — those being Liberia, Sierra Leone, and possibly Nigeria and Senegal — the costs and death toll could be stunted. However, if the outbreak manages to stretch beyond Africa and eat into considerable amount of resources, the economic toll could skyrocket.

Currently, nobody is quite sure what will happen. But that uncertainty is something The World Bank has taken into consideration. “As it is far from certain that the epidemic will be fully contained by December 2014 and in light of the considerable uncertainty about its future trajectory, two alternative scenarios are used to estimate the medium-term (2015) impact of the epidemic, extending to the end of calendar year 2015,” the report reads.

The major catalyst behind the multi-billion dollar forecast is in ‘aversion behavior,’ which basically amounts up to a number of different economic factors creating a snowball effect.

“What we’ve seen, the so-called aversion behavior … the $32.6 billion is not because of the virus itself, 80% to 90% of that is the aversion behavior, the stop in productivity, people don’t go to work, kids don’t go to school, there’s no flights coming in, trade slows down,” Jim Yong Kim told CNBC.

Leaders of the hardest hit nations have met with other world leaders, as well as leaders of The World Bank and International Monetary Fund to seek help. The World Bank Group is putting together a $400 million aid package, $117 million of which has already arrived in Africa. The money is financing drugs and prevention control materials, and also educational outreach.

Again, if the outbreak can be contained to the main African nations in which it already has hit, the costs on a worldwide scale should remain fairly low. But it’s not hard to imagine how high the economic toll could be if Ebola somehow made its way to a major population center in the United States or Europe. Although a single case was found in Dallas, the aversion behavior costs are already starting to hit.

One man held up a flight after cracking a joke about how he had recently come from Africa after sneezing. While that in itself isn’t a huge deal, it still costs the airline — and the passengers on board — time and money. That isn’t the only case in which transportation has been effected by the crisis, as later another man on a flight to the Dominican Republic made the same mistake.

Without a doubt, if more Ebola cases do sprout up in the U.S., a whole lot more than a few delayed flights will happen as a result. Schools and businesses in potentially effected areas would likely see some sort of closure, and the costs of containment and/or sanitation would quickly mount to high levels. Again, analysts are hoping that that won’t happen, and many experts don’t seem to think it actually will.

“This is not easily spread from person to person. I think that’s one thing that people need to keep in mind. It’s not easily transmitted,” said Kent County Health Department Epidemiologist Brian Hartl, according to a report from Michigan’s Fox 17 News. “Some don’t even have running water to wash their hands properly, so that’s why in Africa the situation is so much worse.”

While what is happening in western Africa is horrible, the main effect most Americans are likely to feel is economic. It may end up costing the taxpayers several billion dollars to properly handle the situation, but taking care of outbreaks in the early stages — even if that means spending a lot of money — will end up being a lot less costly in the long run.