Where Will Apple Go Next?

With shares of Apple (NASDAQ:AAPL) trading around $518, is AAPL an OUTPERFORM, WAIT AND SEE, or STAY AWAY? Let’s analyze the stock with the relevant sections of our CHEAT SHEET investing framework:

Relations between Apple and its court-appointed antitrust monitor Michael Bromwich seem to be improving since the company was denied a request to halt Bromwich’s work in February. According to a report from Bromwich seen by Reuters, Apple has finally made a “promising start” to improving its antitrust policies, though Bromwich still noted that he hasn’t had the opportunity to speak to many of the company’s top executives. Judge Denise Cote found Apple guilty of engaging in an elaborate scheme with book publishers to fix the price of e-books to the disadvantage of Amazon (NASDAQ:AMZN) and its Kindle e-readers. The publishers — including Hachette, HarperCollins, Simon & Schuster, Macmillan, and Penguin — elected to settle outside of court, and Amazon recently issued a refund to those affected by the artificial pricing inflation.

Apple vigorously defended its actions, but was still found guilty of breaking antitrust law. Cote appointed an antitrust monitor against the company’s wishes since she believed that Apple was incapable of monitoring its own anticompetitive behavior. Apple initially responded by dragging its feet on everything Bromwich requested, leading the monitor to file a report at the end of last year saying that Apple repeatedly blocked interviews between him and some of the company’s senior executives and refused to provide him with requested documents. Apple has been throwing a tantrum over the monitor since he was instated in October of last year and yet another request to have Bromwich’s investigation put on hold was denied by the U.S. Justice Department in February.

Apple stock has struggled to make significant progress over the last several quarters. However, the stock is currently pulling back and may need time to consolidate. Analyzing the price trend and its strength can be done using key simple moving averages. What are the key moving averages? The 50-day (pink), 100-day (blue), and 200-day (yellow) simple moving averages. As seen in the daily price chart below, Apple is trading between its rising key averages which signal neutral price action in the near-term. 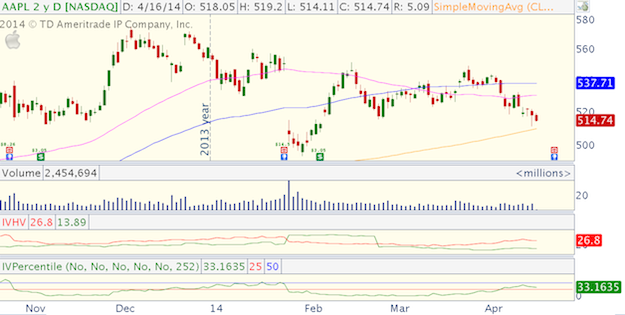 Apple has seen increasing earnings and revenue figures over the last four quarters. From these numbers, the markets have been pleased with Apple’s recent earnings announcements.

Apple has been an average performer, year-to-date.

Apple strives to provide innovative products and services that consumers and companies love to own. The company has finally made a “promising start” to improving its antitrust policies. The stock hasn’t made significant progress in the last several quarters and is currently pulling back. Over the last four quarters, earnings and revenues have been on the rise, which has left investors pleased about recent earnings announcements. Relative to its peers and sector, Apple has been an average year-to-date performer. WAIT AND SEE what Apple does next.