Where Will BP Go Next?

With shares of BP (NYSE:BP) trading around $50, is BP an OUTPERFORM, WAIT AND SEE, or STAY AWAY? Let’s analyze the stock with the relevant sections of our CHEAT SHEET investing framework:

BP is an integrated oil and gas company. The firm provides its customers with fuel for transportation, energy for heat and light, lubricants, and the petrochemicals products used to make items like paints, clothes, and packaging. It operates in two business segments: exploration and production, and refining and marketing. BP provides energy products to consumers and companies worldwide. Without the oil and gas products provided, many consumers and businesses would not be able to operate on a daily basis.

BP has asked the U.S. Supreme Court to recall a New Orleans federal court’s decision to lift an injunction that halted BP’s payments to businesses seeking loss claims related to the 2012 Deepwater Horizon disaster. The oil group formally filed its request to the Supreme Court on Wednesday, asking it to halt payments that it disputes. BP has argued that it faces “staggering” costs that exceed the actual injury caused by the oil spill if payments were allowed to proceed. BP spokesman Geoff Morrell had harsh words on the subject: “Unless the mandate is recalled and stayed, hundreds of millions of dollars could be irretrievably scattered to claimants that suffered no injury traceable to the spill.”

As the application to the Supreme Court from Wednesday states, “BP is likely to suffer irreparable harm if the Fifth Circuit’s mandate is not stayed.” Justice Antonin Scalia is slated to decide BP’s fate, according to a report in the Financial Times, given his duty to handle Fifth Circuit “emergency” applications. The report continues that there is no set deadline for Justice Scalia to make his decision. Additionally, BP’s request for the Supreme Court to step in and offer guidance comes in light of the company stating that of $2 billion paid already, “those awards include $76 million to entities whose entire losses clearly had nothing to do with the spill.” BP cited “lawyers who lost their licenses and warehouses that burned down before the spill occurred” as examples. BP claims that the “illegitimate awards also included an additional $546 million” to individuals located “far from the coast” and who “are engaged in business activities that bear no logical connection to the spill.”

BP stock has been surging higher over the past couple of quarters. However, the stock is currently trading sideways and may need time to consolidate. Analyzing the price trend and its strength can be done using key simple moving averages. What are the key moving averages? The 50-day (pink), 100-day (blue), and 200-day (yellow) simple moving averages. As seen in the daily price chart below, BP is trading above its rising key averages which signal neutral to bullish price action in the near-term. 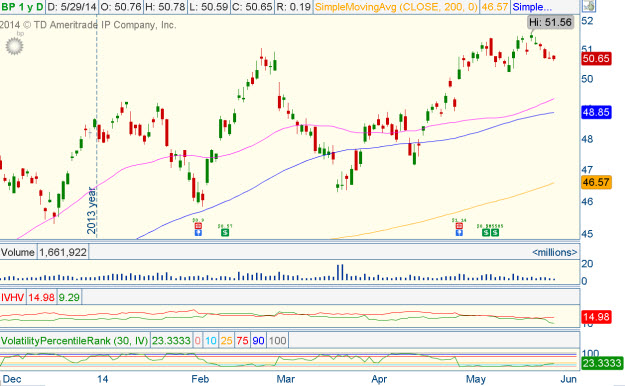 BP has seen decreasing earnings and revenue figures over the last four quarters. From these numbers, the markets have had conflicting feelings about BP’s recent earnings announcements.

BP has been a relative performance leader, year-to-date.

BP is an oil and gas company that supplies energy products and services worldwide. The company formally filed its request to the Supreme Court on Wednesday, asking it to halt payments that it disputes. The stock has been surging higher over the past couple of quarters, but is currently trading sideways. Over the last four quarters, earnings and revenues have been decreasing, which has produced conflicting feelings among investors. Relative to its weak peers and sector, BP has been a year-to-date performance leader. Look for BP to OUTPERFORM.