Where Will Sony Go Next?

With shares of Sony (NYSE:SNE) trading around $18, is SNE an OUTPERFORM, WAIT AND SEE, or STAY AWAY? Let’s analyze the stock with the relevant sections of our CHEAT SHEET investing framework:

Sony is involved in the electronics, games, entertainment, and financial businesses. The company operates in several different segments: Consumer Products Services, Professional Device Solutions, Movie, Music, Finance, Mobile, and Other. Through its segments, Sony is able to provide a wide range of products and services. These products include televisions, cameras, personal computers, game consoles, navigation systems, audio and video equipment, software, phones, and media platforms. The company brings new technologies to the hands of your average player as well as professional users. Look for Sony to continue to be a top choice for avid technology adopters worldwide.

Sony has recalled 26,000 of its newest Vaio laptops as Panasonic batteries within the computers have overheated and caught on fire. Sony has asked everyone to stop using the Vaio Fit 11A laptop as soon as possible. According to The Wall Street Journal, Sony has received three different reports of this particular device overheating and causing burns — one in Japan on March 19, one in Hong Kong on March 30, and one in China on April 8. Sony stopped selling the Vaio Fit 11A at the beginning of the month. According to a press release seen by The Wall Street Journal, Sony is identifying the affected computers by serial number and is creating a way to either repair or replace the damaged units. The company said it will make an announcement telling Vaio Fit 11A owners what to do in the coming weeks, but warned them not to use their laptops until they are fixed.

Sony said that it has sold 29,905 of the units world-wide since they debuted in February. A breakdown for where the units were sold shows 7,000 in Asia-Pacific not including Japan and China, 3,600 in Japan, 2,000 in China, 7,000 in Europe, 5,600 in Latin America, and only 500 in the U.S., according to figures from Sony seen by The Wall Street Journal. A spokesperson from Panasonic who spoke to The Wall Street Journal said that the company had indeed provided Sony with the batteries through an outsourcing contract, but declined to say if any other laptop computers also use the same batteries, saying such information is confidential. The spokesperson did say that each battery is altered to the client’s requirements and that the company has not received complaints about any other of its batteries.

Sony stock has seen its fair share of struggles over the past few years. The stock is currently trading sideways and may need time to consolidate before heading higher. Analyzing the price trend and its strength can be done using key simple moving averages. What are the key moving averages? The 50-day (pink), 100-day (blue), and 200-day (yellow) simple moving averages. As seen in the daily price chart below, Sony is trading between its rising key averages which signal neutral price action in the near-term. 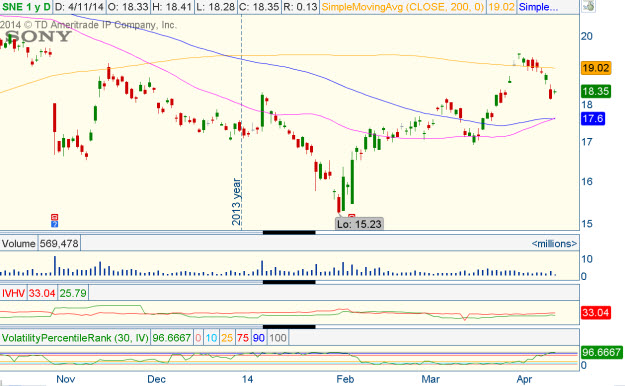 Sony has seen increasing earnings and revenue figures over the last four quarters. From these numbers, the markets have been pleased with Sony’s recent earnings announcements.

Sony has been a relative performance leader, year-to-date.

Sony is a provider of innovative technology products to consumers and companies worldwide. The company has recalled 26,000 of its newest Vaio laptops as Panasonic batteries within the computers have overheated and caught on fire. The stock has seen its fair share of struggles over the past few years and is currently trading sideways. Over the last four quarters, earnings and revenues have been on the rise. However, investors have had mixed feelings about recent earnings announcements. Relative to its peers and sector, Sony has been a year-to-date performance leader. WAIT AND SEE what Sony does this coming quarter.