Where Will Toyota Go Next?

With shares of Toyota Motor (NYSE:TM) trading around $107, is TM an OUTPERFORM, WAIT AND SEE, or STAY AWAY? Let’s analyze the stock with the relevant sections of our CHEAT SHEET investing framework:

Toyota Motor is a Japan-based company mainly engaged in the automobile business and financial business. The company operates through three business segments: automobile, finance, and others. Through its segments, Toyota Motor designs, manufactures, and sells vehicles as well as related parts and accessories; offers financial services related to the sale of its products; and is involved in the design, manufacture, and sale of housing, information and communication businesses. Vehicles and related products are seeing increased innovation, and Toyota Motor is at the head of this trend. Toyota has been dominating the competition and has been first to provide new technologies so look for the company to continue innovating.

General Motors (NYSE:GM) is no longer the sole member of the multimillion-unit recall club for 2014, as Toyota announced on Wednesday that it is recalling 6.39 million vehicles around the world after finding five different defects or faults pertaining to parts ranging from steering to seats, Reuters reports. It’s the company’s second largest recall in its history. Notably, Toyota says that it is not aware of any injuries or deaths that have occurred as a result of any of the issues, which are present on twenty-seven different Toyota models, including the RAV4 crossover and Yaris subcompact. The case further illustrates that while mass production is key for keeping costs down, problems can become systemic incredibly quickly when they ultimately arise. The problems were also present in the Pontiac Vibe and Subaru Trezia, vehicles that Toyota partnered on with GM and Fuji Heavy Industries, Reuters said.

Few details of the five separate recalls were offered, and it’s still not certain as to whether the faults originated from Toyota’s suppliers or its own manufacturing process, according to Reuters. The largest of the five recalls covers 3.5 million vehicles to replace a spiral cable that could be damaged when the steering wheel is turned, Reuters cited Toyota as saying, which could cause the air bag to fail in the event of a crash. Another 2.32 million three-door models produced between January 2005 and August 2010 are being brought back in to check for a fault in the seat rails that could cause the seat to slide forward in a crash, increasing the chances of injury to both driver and passenger.

Toyota Motor stock has been pulling back over the last couple of quarters. The stock is currently trading near lows for the year and may need time to stabilize. Analyzing the price trend and its strength can be done using key simple moving averages. What are the key moving averages? The 50-day (pink), 100-day (blue), and 200-day (yellow) simple moving averages. As seen in the daily price chart below, Toyota Motor is trading below its rising key averages which signal neutral to bearish price action in the near-term. 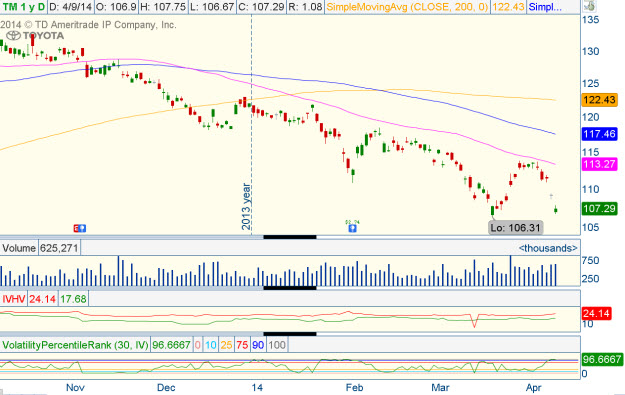 Toyota Motor has seen increasing earnings and revenue figures over the last four quarters. From these numbers, the markets have had conflicting feelings about Toyota Motor’s recent earnings announcements.

Toyota Motor has been an average performer, year-to-date.

Toyota Motor provides innovative vehicles and related products to consumers and companies worldwide. The company announced on Wednesday that it is recalling 6.39 million vehicles around the world after finding five different defects or faults pertaining to parts ranging from steering to seats. The stock has been pulling back over the last couple of quarters and is currently trading near lows for the year. Over the last four quarters, earnings and revenues have been on the rise. However, investors have had conflicting feelings about recent earnings announcements. Relative to its peers and sector, Toyota Motor has been an average year-to-date performer. WAIT AND SEE what Toyota Motor does this quarter.